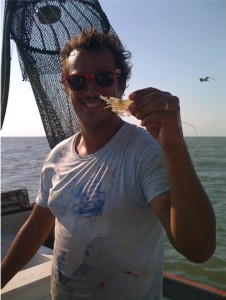 After six months of non-stop work during the longest and hottest summer in decades, the intrepid fishermen/trans-media artists at Shrimp Boat Projects were finally able to launch their refitted vessel, the F/V Discovery.

Sailing from April Fool Point in San Leon, TX, a nowheresville sandspit without even a Wal-mart, the first few weeks of the refit included a near-sinking in the ship channel, which makes for good reading on the project’s website. According to the artists, “we had no idea what they were doing when we started,” but now, after repairing every system on the boat, they are starting to catch and sell some shrimp.

Seems like an intersting project, but I am not finding the “art” in it. As I said before Beuys’ 7000 Oaks isn’t a scultpture without the basalt stones. Maybe I need more information than what is on the website. I do love to eat shrimp, though!