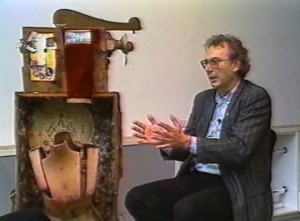 Former Menil chief conservator Carol Mancusi-Ungaro began interviewing artists, in the presence of their works of art in 1990, recording their attitudes and feelings toward the works’ conservation and exhibition. The series of videotaped  interviews  snowballed into the The Menil Collection’s Artist documentation Program, with 33 artists on record. Now, the ADP interview collection is available online on the Menil’s website as the ADP Archive.

The ADP interviews are casual and candid, filmed in the conservation studio, an exhibition gallery, or an artist’s studio, often by award-winning filmmaker and video artist Laurie McDonald, who performed video editing and post-production on the full collection.