ArtPrize: where the people get what the people want and one artist gets $250,000 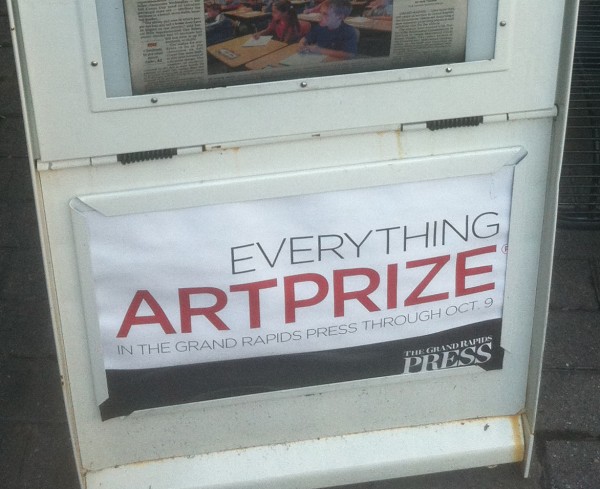 Local media enthusiasm has helped make ArtPrize an even bigger deal than its money has.

ArtPrize is an annual competition that features thousands of artworks ranging from the sublime to pure schlock, artists acting like candidates for public office, local media in a state of unabashed boosterism, and a voting system that relies on digital savvy. Launched in 2009, it features hundreds of art installations in and near downtown Grand Rapids, Michigan. It offers an award of $250,000 to a first-place winner, along with nine lesser awards, all chosen by popular vote, and seven professionally conferred awards. Total prize money is about $450,000.

The top prize-winner in 2009 was an unconventional seascape by a Brooklyn artist named Ran Ortner. The large-scale work had real critical merit–a relief to the city’s professional art community. The top winner in 2010 was a near-life-size pencil drawing of World War I soldiers, made by Grand Rapids artist Chris LaPorte, that sealed the popular trend towards big, representational images. But establishment of juried awards, which hadn’t been part of the first ArtPrize, prevented the competition from devolving into pure, populist spectacle.

ArtPrize 2011 has attracted about 400,000 viewers and more than 1,500 artists–most of them from Michigan. The balance came from elsewhere in the U.S., with a handful from overseas. Many, perhaps most, competitors were amateurs, many were commercial illustrators or designers. A solid percentage were studio art majors or professionals of varying degrees of facility and sophistication.

This year’s Top Ten works included two pleasant, nonobjective mixed-media entries; three caricaturish sculptures in welded steel; a droll installation of chainsaw-sculpted wooden bears; a performance piece that could have been a parody of Gilbert & George but was straight-ahead macho; a life-like sculpture of former President Gerald R. Ford; and an outdoor mural-scale collage. The winner was a tesserae altarpiece representing a crucified Christ, by Mia Tavonatti from Santa Ana, California. 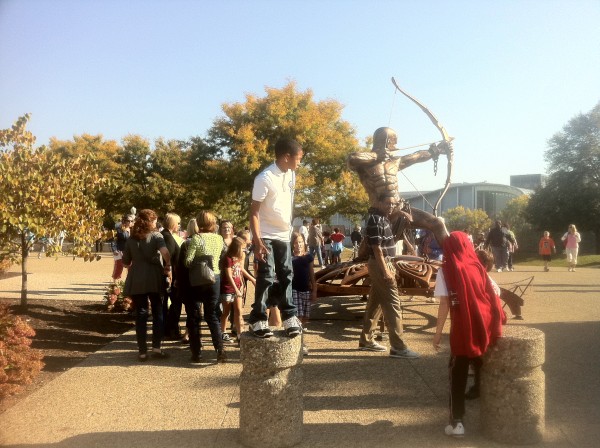 Thanks to gorgeous weather, ArtPrize 2011 brought tens of thousands of people into central Grand Rapids, mostly to look at art. For hundreds of school kids on ArtPrize field trips, though, the real attraction was ramming around outdoors in the middle of the week. Photo credit: Janet Tyson 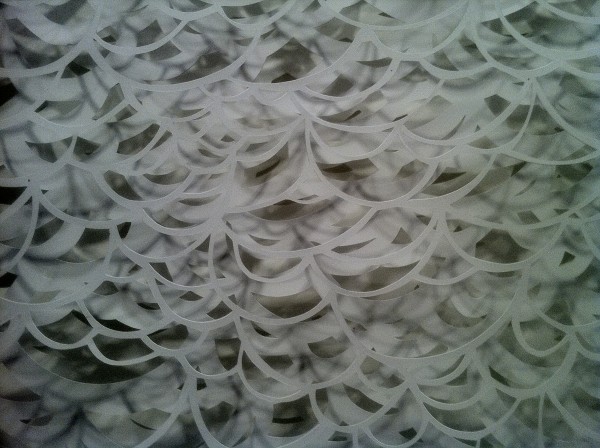 A detail from The Tempest (2011) by Laura Alexander, shown at the Grand Rapids Art Museum. The work measured about 9-by-8 feet and comprised five layers of hand-cut paper. Its delicate beauty, along with the evident patience required to produce it, earned it a place in the competition’s Top Ten. Photo credit: Janet Tyson 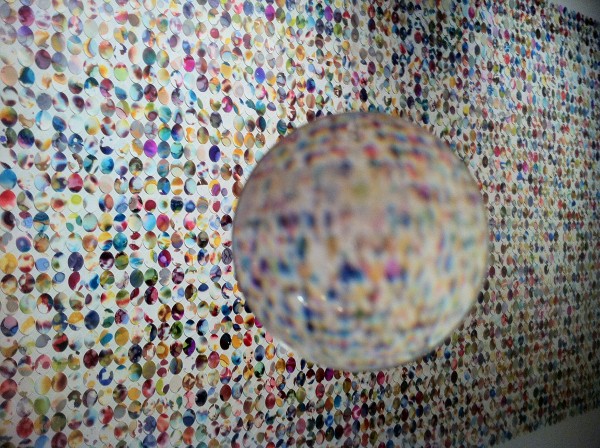 Consisting of hundreds of dyed pieces of paper and several suspended lenses, Mesmer Eyes (2011) by Kathy Goodell was installed at the Grand Rapids Art Museum and seen by thousands of visitors during the competition. From a formal perspective, it was gorgeous and effectively installed. But Goodell didn’t even attempt to offer anything beyond the optical experience. Photo credit: Janet Tyson 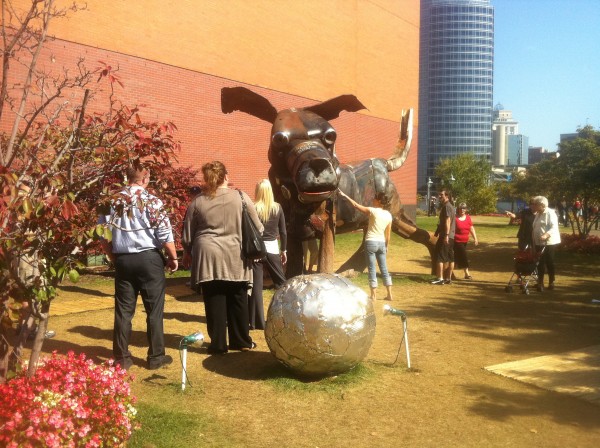 Rusty (2011), by Michigan artist Ritch Branstrom, was among the Top Ten picks. Some critics wished the popular vote yielded a more sophisticated field of finalists. But this year’s were no worse than those of the first two competitions. Photo credit: Janet Tyson 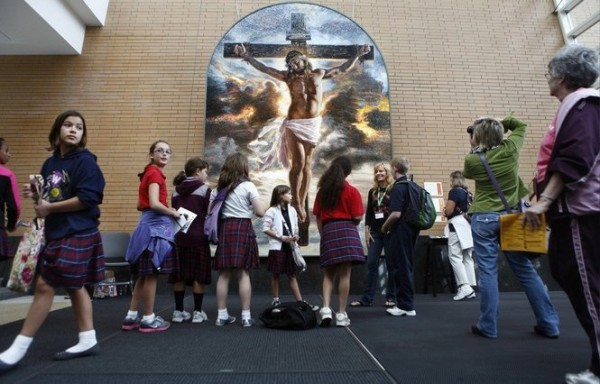 Crowds in front of the grand prize-winner, a mosaic mural by California artist, Mia Tavonatti. 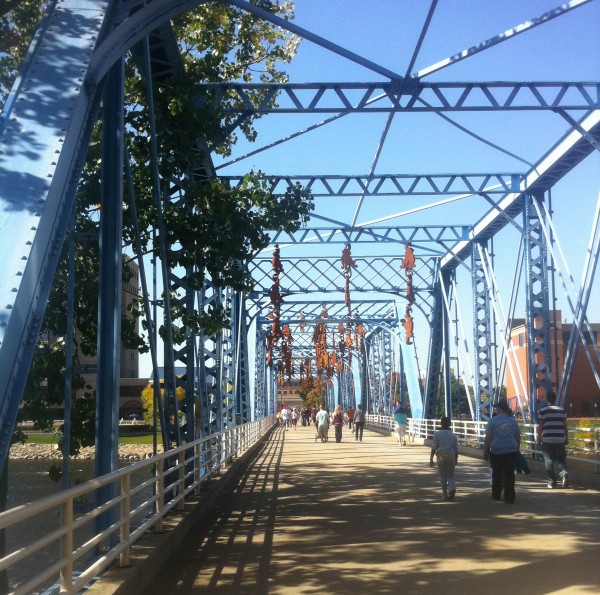 The so-called Blue Bridge–a former railroad trestle converted to pedestrian bridge–connects a campus of Grand Valley State University with the city’s central business district. It, too, is a site for art installations. Photo credit: Janet Tyson 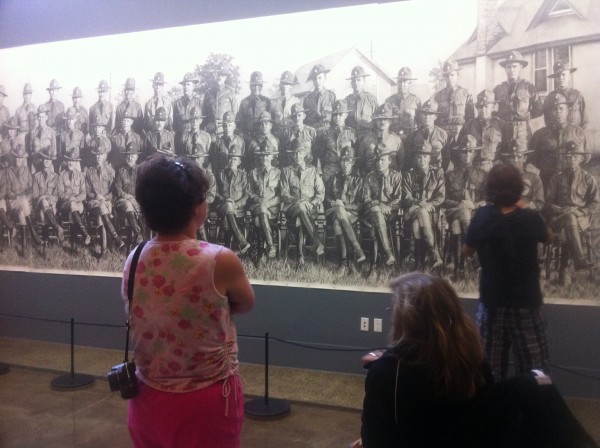 Janet is correct in that artprize is a mixed bag. There were some great art, and all in all it is a very exiting event for the entire city. Still there is a need for and will be the continued reinvention and improvement of the process until it the event reaches it’s ideal state. For an event that is three years young I think it shows great promise. As a professional artist I do not hope to see another art event that follows the patterns that have already been set. Instead, something different, with a unique kind of energy. The hope is that it will be something that is fluid, everchanging, yet consistantly finding a way to acknowlege talented artist who’s work can speak to both experts and average people simulaneously. It will be a mixed bag of artist, and art where the unschooled, craftsmen and intellectual will all show side by side, each appealing directly to an equally mixed audience. So, janet does some insightful commenting and all should, if possible, come to Grandrapids to experience it for yourself.

Sedrick, thanks for pitching in with an artist’s perspective. I think that ArtPrize is going to need to work hard to keep professional artists interested–and to keep their work not completely isolated in professionally curated venues, but also out in the sketchier spaces.
I spent more than an hour the other evening debating with my friend Craig about the direction of the competition. He’s the guy I mentioned who owns buildings on Division and constantly is networking to further his commercial interests. His take on ArtPrize mixes a fine art and a business perspective, and he says we missed a big chunk of decent paintings at the Big Old Building.
I showed him photographs of your work and he was very sorry he didn’t see it.
My sense is that it will be at least a couple of years before the competition is sorted out. There still are too many people who don’t care about the overall quality of work and just want to see creativity (also known as ‘crazy crap’) for creativity’s sake.
If they were to make one change for next year, I hope it’s to extend the pre-voting amount of time for people to view art.
If they were to make a second change, I hope it’d be to provide better logistical support for peripheral spaces. Or just to rein in the boundaries and exclude outlier venues.
Third change? Seriously up the amount of money for the juried awards.
Implementing those changes are what they need to do if they want to attract serious national attention–and not just the skeptical coverage they’ve received so far.

Janet,
Thanks for the article and the great photos. I have been tempted to enter before but skeptical. Until now I have not seen photos of the work.
Not skeptical anymore. Will enter next time.

Janet,
Thanks for the great photos and article. Have thought of entering in the past but skeptical about the logistics etc.
Not skeptical anymore!