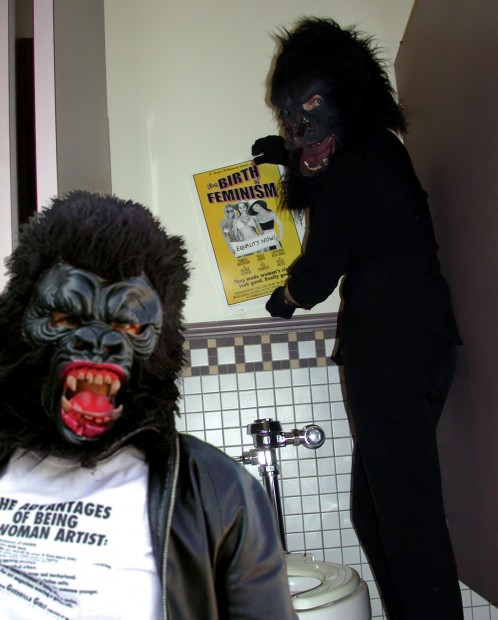 Upon arriving at the Angelika Theater on Thursday evening for the Dallas Video Festival, I immediately noticed that I was a tad underdressed in my jeans and sandals.

Surrounded by a proliferation of platinum blondes sporting five-inch-high stilettos, I waited in line for what seemed an interminable length of time. I’m in awe of anyone who can walk in those things without breaking their ankles. Those shoes would serve as an effective, deadly after-dark weapon.

As a newcomer to the city, it was like seeing every Dallas stereotype come to life—all apparently waiting patiently in line to secure tickets to !WAR: Women, Art, Revolution (2010), a documentary film about the history of the feminist art revolution. After finally getting to the front of the line, I was both relieved and annoyed to find I was in the wrong place—I had unwittingly crashed the Dallas social media club’s networking event. The inherent irony should be a topic for a future article.

Although I was primarily interested in seeing short, experimental programs at the festival, two feature-length documentaries caught my attention. !WAR, a 40-year, blood, sweat and tears project by Lynn Hershman Leeson, chronologically examines the developments of feminist art from the late 1960s to the present. Hershman Leeson historicizes the movement within the larger framework of gender discrimination, war protests, civil rights and gay rights. The artist/director shot and archived over 12,000 minutes of interviews and footage. Eighty-three minutes made the final cut.

The real thrill for me was seeing/hearing from so many amazing artists whose work was not taught in my art history classes, such as Carolee Schneemann, Hannah Wilke, Ana Mendieta, Martha Rosler, Judy Chicago, Eleanor Antin, Suzanne Lacy, and Yvonne Rainer. Feminist art critics and historians such as B. Ruby Rich and Amelia Jones offer a larger context within which to place the artists’ work.

Hershman Leeson could have let an angry or whiny tone dominant the film. After all, the female artists experienced tremendous discrimination and still do. Wouldn’t complaining be justified? The true brilliance of the film is found in humorous moments such as the footage of ridiculous congressmen censoring Judy Chicago’s Dinner Party, or the Guerrilla Girls’ antics and performances.

Jones says that “Feminism didn’t succeed in changing the structure of how art was made, shown and sold.” However, artist Janine Antoni leaves us with a spark of hope. She thanked all the female artists who came before her, stating that their struggles paved the way for subsequent generations of female artists. The film is an important contribution to an often overlooked part of art history.

Photojournalist Mimi Chakarova’s searing film The Price of Sex (2011) investigates sex trafficking of Eastern European women to the Middle East and Western Europe (with Turkey and Dubai as prime hot beds of slavery and prostitution). The subject is so horrific that it would have been easy for Chakarova to proselytize or resort to sensational tactics to communicate her message. The film’s power lies in her ability to go beyond blaming corrupt governments and patriarchy, showing the complexity of the issue.

She states that although men fuel the demand for trafficking, it requires the complicity of women. As a native Bulgarian, she relates how the fall of communism affected her village and surrounding areas. Chakarova combines risky undercover filming (such as posing as a prostitute in a club with a hidden camera) with beautiful but desolate landscape footage of her homeland. Her subjects are not talking heads; they tell their stories with quiet dignity.

I watched a number of short, experimental programs. For the most part, they were thematically well curated. I like short quirky works that deviate from the established norm. Conceding to my waning attention span, a few were too long. Just because it can be 28 minutes doesn’t mean it should be. The hackneyed “less is more” still applies.

One of my top picks includes Penny Lane’s How to Write an Autobiography. A monotone computer voice dictates the rules for effective autobiography writing, while childhood images of the artist move/morph their facial features from happy to grotesque.

My favorite program was Fables and K-Holes, which featured experimental animation. “Fairy tales gone awry” would aptly describe this program. Four of the six shorts explored the theme of humans destroying nature. Duke and Battersby’s Beauty Plus Pity (2009) features God as a senile Santa Claus who forgot to take his meds. In Steve Reinke and Jessie Mott’s Blood & Cinnamon, talking animals discuss the pitfalls of having children. The watercolor line drawings are simple, but beautifully executed. Anima Mundi (2010) by Katherine Balsley is a fast-paced animation of still images of flora and fauna. It made me think about genetically engineered seeds and mutant hybrids. Also included in the program was Jodie Mack’s cut paper stop-action animation The Saddest Song in the World.  It was laugh-out-loud funny; the paper scraps merge and tear apart to the artist’s own rendition of “Will You Still Love Me Tomorrow?” While it differed from the other approaches to fables, it ironically presented our cultural myths about love and relationships.

Another fun(ny) program was Oh Come On. As in, “OhComeOn, you’ve got to be kidding me, you can’t be serious.” My only disappointment in this program was the Danish puppet series Radio Karen. It was off-the-wall, but much too long to sustain my interest. Imagine drunk muppets on acid. The Mono Show, directed by Angela and Mark Walley, features Jeremiah Teutsch and Matthew Van Hellen performing absurd acts. Think of German performance artist John Bock with a touch of Beckett and Benny Hill. Their characters include a lusty drag queen cop, widowed rednecks who eat nothing but Spaghetti Os and fighters who do battle with pool flotation noodles. In Bryan Poyser’s  brilliantly edited The Fickle (2011), a woman relives twelve failed relationships in a seven-minute unbroken scene. The Grown-ups (2009), by Jason Wehling, features the after-effects of a failed dinner party where manners deteriorate into a violent food fight.

The Dallas Video Festival was well organized with interesting programming. Too bad it was sparsely attended. I should have rallied the social media club to boost attendance.
__________________

This and That: Janine Antoni and Hannah Levy

Thanks for coming to Dallas Video Fest! Stay tuned for 25th annual…hoping for October 2012 at Dallas Museum of Art, our original home!

I’m disappointed I missed the video festival this year.
Especially after reading this. I studied with Yvonne Ranier in the 80’s and I find her work always interesting. I am going to look for WAR: Women, Art, and Revolution. Does anyone know if and where it is available?

Hi Michael,
Check out the film website http://womenartrevolution.com/
There are a lot of clips and you can contact them to find out where it will be screened. I’m not sure if it’s available via dvd yet. I was privileged to see a retrospective of Yvonne Ranier’s work in Philadelphia. Many of her unseen works… really amazing.

Yes! Thanks for this review, particularly of the experimental programs. I was lucky to be involved in curating these programs along with Dee Mitchell and Bart Weiss. A bit of a shameless plug, but I’d like to invite you to come to the experimental film and video art screening series I program periodically, Contemplative Cinema. I may be putting a program of films together at the Texas Theater in the next few weeks, as well as something at the Reading Room. I’ll be sure to let you know!

Hello Michael Morris,
Besides writing about film and video, I also teach and make video. Please keep me posted about your programming, as I am always interested in innovative and experimental work.