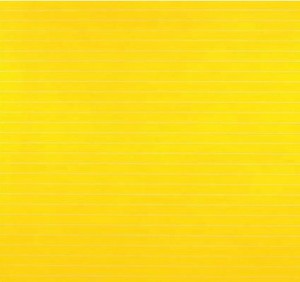 Big yellow minimalism is in- The Museum of Fine Arts has announced the acquisition of Frank Stella’s Palmito Ranch (1961), which they got  at a discount from the artist, who gave them a break in honor of the MFAH’s late director Peter Marzio. “Peter Marzio was everything you would want from the director of a great museum,” Stella commented about his gift. “I got to know Peter when the MFAH invited me to create murals for the 1982 Stella by Starlight gala; from then on I counted him a friend.” Alison de Lima Greene, curator of contemporary art and special projects, said that Stella “was the first to point out to me how the title has a special resonance for Texans and he has recalled that it was one of Robert Rauschenberg‘s favorite examples of his work. But more important, as the artist himself has stated: ‘Palmito Ranch is as special and as beautiful as a painting can be.'”

It must have been- Walter De Maria chose a similar yellow field for his  1968 “The Color Men Choose When They Attack the Earth” on display now as part of the epic Trilogies show at the Menil, and hilariously, so did the designers of this a pop-up window advertising Hellmann’s Mayonnaise that appeared in my browser while researching it! 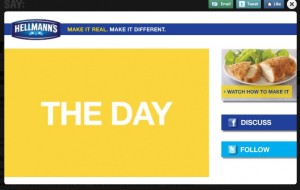 Perhaps the two museums, if still fond of yellow, should add a yellow Lee Littlefield sculpture from the 1980s.