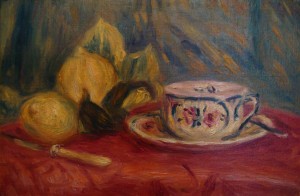 Renoir’s Lemons and Tea Cup, a late mini-masterpiece of impressionist still life that has been on loan the the McNay since the 1960’s, has finally stuck; it’s now part of the McNay’s collection, a gift by exchange from Mrs. Morgan Chaney. Two portrait sketches, also by Renoir, were gifted by Lois and John Hayward in memory of Muriel Hayward, bringing the McNay’s Renoir score up to 6. Better still, the hi-res image on wikimedia is in the public domain- I’m changing my desktop now!

In related news, Houston police have reported the theft of another late Renoir, Madeleine Leaning On Her Elbow With Flowers In Her Hair from a Houston gallerist’s home earlier this month. A $25,00 reward is offered in the bizarre case in which the homeowner suggested the painting as a valuable piece of swag. 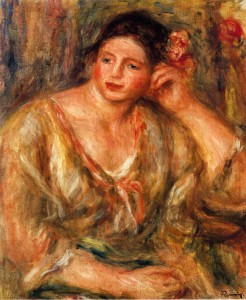