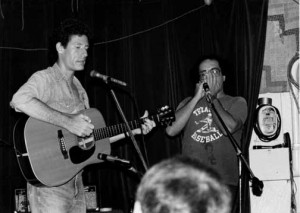 Tune in tonight for For the Sake of the Song: the Story of Anderson Fair, episode seven of “The Territory”, the Southwest Alternative Media Project (SWAMP)’s documentary series on the cultural life of Houston. It’s showing on channel 8 at 7pm.

The film tells the compelling story of how the little coffeehouse & restaurant in Montrose was transformed into a unique music institution. Anderson Fair Retail Restaurant has fostered and nurtured some of the most important songwriters in America, including Grammy Award-winning artists Nanci Griffith, Lyle Lovett and Lucinda Williams. Immediately after the broadcast, stay tuned for Lyle Lovett and Friends Anderson Fair Reunion live from the Channel 8 studios.