Echoes of the Past: The Buddhist Cave Temples of Xiangtangshan at the Meadows Museum 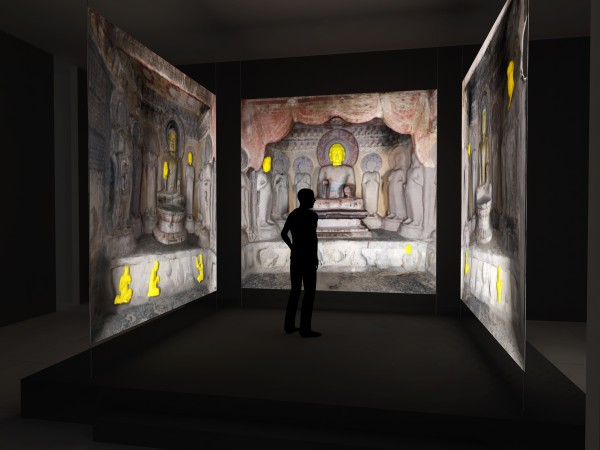 The centerpiece of the exhibit, this 3-D digital reconstruction of the South Cave in Xiangtangshan, China, combines technology with the skills of art history sleuths to recreate a Buddhist temple cave in all its splendor. Missing items from the cave appear in yellow. 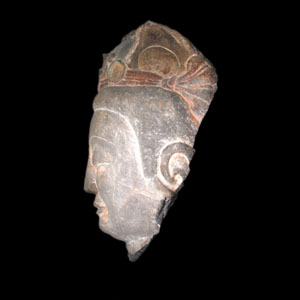 The limestone sculpture “Head of a Bodhisattva Attendant of Maitreya” graced an altar in the South Cave in the sixth century. Now it’s part of the collection of the University of Pennsylvania Museum of Archaeology and Anthropology.

The University of Chicago and the Smithsonian have put together this touring exhibition of Buddhist sculptures purloined about a century ago from limestone caves in northern China. The Indiana Jones in me found it very, very cool, especially the big 3D triple screen that recreates how those caves looked prior to looting. There are also interactive screens that gently guide you deeper into the works on display, and simple glossy one-sheets for those who prefer old-school reading, then a four-minute unnarrated video in the backroom to give you a sense of the region today, and also books and monitors for some hardcore scholarly research.

The tech stuff is well done and interesting, though hardly cutting-edge – if you don’t have a show-specific iPad app, you are behind the times (the grandfatherly Kimbell just schooled the younger, rowdier North Texas museums on this point with Picasso and Braque).

The exhibit includes this sixth century “Standing Avalokiteshvara” from the Buddhist cave temples of Xiangtangshan, China. The limestone sculpture with lacquerlike coating is on loan from the University of Pennsylvania Museum of Archaeology and Anthropology.

But at every turn the visitor is reminded that this stuff should not be here. There is a wall-mounted statement in the back gallery explaining that UNESCO forbids the acquisition or display of objects stolen after 1970. The big triptych screen represents the digitally-scanned stolen objects in bright yellow, a sad color as well as a highlighter, and I felt loss and outrage that some of those pieces were in the same room as me. My enjoyment was steadily chipped away by constant reminders of the unnatural road by which these sculptures came to be here. The antiquities sections of major museums do not make me think about this, leaving me free to believe that some ancient artisans were hoping to get their work into the Met all along.

The intended antidote is an emphasis on research and the scholarly life, as if the show is trying to apologize for itself and justify its display of these objects. It’s unpleasant, like being reminded of how the cow becomes the cheeseburger or that the gorilla didn’t volunteer to live in the zoo. I know the reality but I don’t want to think about it.

“Echoes of the Past: The Buddhist Cave Temples of Xiangtangshan” runs through January 8, 2012, at SMU’s Meadows Museum in Dallas.

Images and captions courtesy of the Meadows Museum at Southern Methodist University.

Betsy Lewis is a writer who lives in Dallas and doesn’t eat beef but does wear leather.