Greatest Work by Greatest Painter Who Has Ever Lived Acquired by Kimbell: Fort Worth New Navel of 18th Century Art World 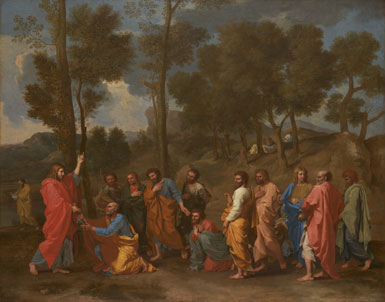 The Kimbell in Fort Worth has a knack for making exciting news out of old paintings: they have announced an new acquisition, bigger than the Michelangelo monsters, more sacred than the Titian’s Bella in a Blue Dress: Nicholas Poussin’s Sacrament of Ordination (Christ Presenting the Keys to Saint Peter).

Works like this carry the approval of the ages, which is why they rarely come unstuck from their castles and make their way to Texas.  British artist Sir Joshua Reynolds (1723-1792) said of the Ordination “I think upon the whole that this must be considered as the greatest work of Poussin, who was certainly one of the greatest Painters that ever lived.”  See for yourself: it will be on view at the Kimbell beginning Wednesday, September 14.