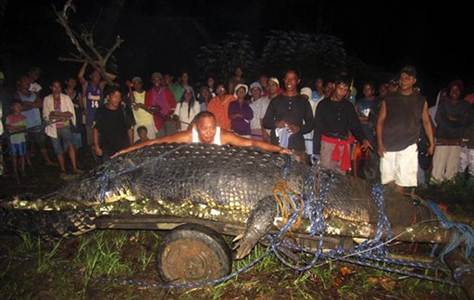 The decapitated cattle were worrisome, but the disappearance of a farmer near the marshes in Bunawan, Agusan del Sur province, Philippines, led villagers to petition for a government croc hunt, which after several weeks, $7000, and the death from heat stroke of naturalist Ernesto “Lolong” Conate, led to the capture of a 20-foot saltwater crocodile, possibly the largest ever caught alive. The monster will be named Lolong, in honor of the fallen croc hunter, confined henceforward to a concrete and steel pool at the nearby Consuelo Nature Park, and is awaiting certification for the Guinness Book of World Records.