(Relatively) Smooth Sailing for the Dallas Museum of Art 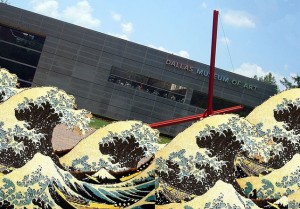 I was excited to see that The Dallas Morning News started a series on “Money in the Arts” on the financial state of metroplex arts organizations in August. The first article in the series looked at the Dallas Museum of Art. The article reported a variety of numbers, and I went in search of context for them. Here’s what I found (quotes are from the Morning News piece):

“The museum’s financial team was forced to reconfigure its $150 million investment portfolio after unrealized losses of $29.6 million in 2008 and $8.7 million in 2009.”

Yep. This happened to everyone.

As the article’s author Michael Granberry notes, the exhibition Tutankhamun and the Golden Age of the Pharaohs (October 2008 through May 2009) drove an uptick in membership. In fact, the decline in membership from 2009 to 2010 may represent nothing more than the expiration of all the memberships driven by Tutankhamun. Blockbuster shows like Tut attract new members who want the benefits of membership—priority tickets and the ability to skip the long general admission lines—solely for the purpose of seeing the exhibition. It’s extremely difficult for a museum to retain these members after they’ve seen the show. The Dallas Museum of Art’s membership revenues in the years immediately prior to Tut support this story. Two years before Tut opened, the Museum reported $1.7 million in membership revenues—that’s the same number The Dallas Morning News gave for 2010. Then, the year leading up to Tut, the Museum reported $2 million in membership revenues—anticipating the opening of the exhibition, new people joined to get membership benefits. So, the decline in membership revenue is merely a return to pre-Tut levels. In that sense, there’s no disturbing trend here away from museum membership, just the natural ebb and flow around blockbuster exhibitions.

These numbers are not completely out of line with those reported by other museums of about the same size. I took a quick look at SFMOMA, Detroit Institute of Arts, MCA Chicago, and the Portland Art Museum as comparison cases. (The former two are slightly larger in terms of assets and income, the latter two smaller.) Here’s what I found:

So what’s the upshot of these numbers? The Dallas Museum of Art’s struggles appear to be mostly typical, not unusual.  Nevertheless, glancing at the Museum’s numbers for last year, the largest cause for concern not mentioned in The Dallas Morning News was a the FY 2009 deficit. With expenses of $28 million and revenues of only $18 million, the Museum experienced quite a shortfall. Still, as the Morning News pointed out, the Dallas Museum of Art kept a balanced budget for 14 years prior to the financial crisis. Most likely, with the strong support it receives from Dallas’s upper crust, the Museum will continue to ride out the recent storm and its aftershocks with relative ease.