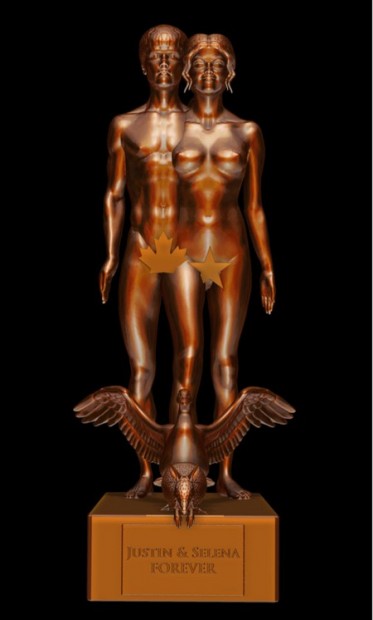 Daniel Edwards, Justin and Selena As One, 2011

Justin Bieber and Selena Gomez are now immortalized in a nude sculpture to be displayed sometime in September at New Fine Arts, a notorious adult superstore in Dallas. This arrangement is generating national coverage – NBC’s Today Show, Fox News, Huffington Post, San Francisco Chronicle, Perez Hilton – but was first reported by our friends at the Dallas Observer. It’s terribly exciting and horribly immoral and I have dreamed of this day.

It sounds evil and this pleases me, except the figures in this sculpture are not actually nude. They are wearing loincloths in the shapes of a Canadian maple leaf and a Texas Lone Star.

Tame. Lame. Half-assed. Scandal overblown and undeserved. Do it or don’t do it, but don’t take a coward’s road then call yourself dangerous.

Sculptor-poser-publicity-seeker Daniel Edwards previously made headlines by making a statue of Britney Spears giving birth. He has a stable full of gross, amusing statues of famous people, and it seems to be working effectively in getting lots of press for Mr. Edwards. Awesome, dude, you are somebody.

I Don’t Know Who Justin Bieber Is

I watched this video almost all the way through and got creeped out that he is sexable to anyone at all.

I Don’t Know Who Selena Gomez Is

She is from Grand Prairie. She performs in Dallas on August 31st, so this publicity is not exactly bad news for her. Frankly it makes me suspicious. Do not trust American youth. 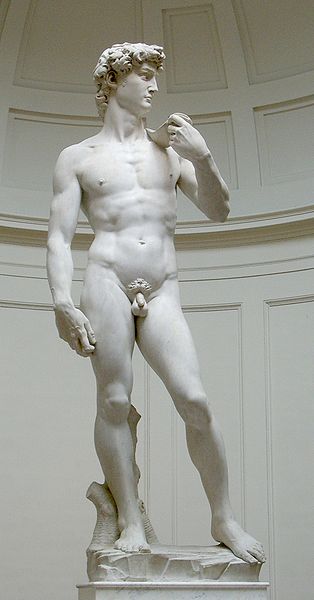 New Fine Arts: “Justin and Selena As One” by Daniel Edwards and an assortment of sex toys and pornography I am scared I will accidentally touch

The Rachofsky House: “Apple Heads” by Paul McCarthy and an assortment of priceless contemporary art I am scared I will accidentally touch

Didn’t we just have a teen idol named Justin last decade? That turned out well.

Betsy Lewis is a writer who lives in Dallas and eerily resembles the lady half of “Apple Heads.”

Similar But Different #30: Art As Digestion

Wow – just looked up “Monument to Pro-Life: The Birth of Sean Preston”. Just…WOW.

That’s fucked up. But I lovet the dick in the box part….