Every December I wait anxiously for The Lives They Lived edition of The New York Times. It’s not because I am morbidly wanting to see who died so much as I am curious to see the potential of a life well lived and the way they will be remembered. That being said it could be expected that I would respond positively to Kurt Mueller’s Living Still, part of the Artpace International Artist-in-Residence 11.2 exhibition curated by Chus Martinez.  Mueller’s subject matter does not focus specifically on the dead as much as the way we the living choose to remember and monumentalize them.

There are a total of five works in the second floor gallery that interact well together. The layout is austere and minimal and while the exhibition lingers, three pieces sat with me the longest. 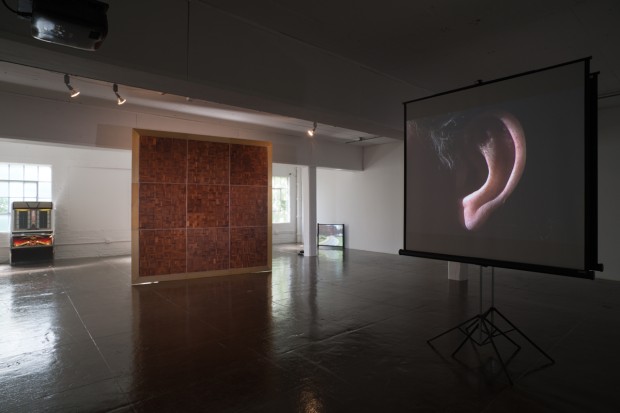 Cenotaph is a jukebox that plays a selection of 99 moments of silence taken from our collective history. Put a quarter in and then make a selection. Instead of raucous music you hear the words that lead up to a gesture of respect and reflection. It is a history lesson disguised in nostalgia that can say a lot about the viewers’ selections. Mueller has altered a machine originally built to musically emanate good times, create bittersweet memories and launch heartache subtly so that it continues to achieve those primary goals through subversion. 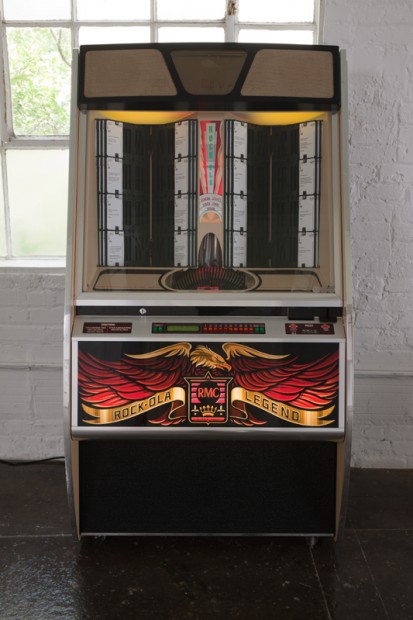 Man in Black (after Sonya Vasquez) consists of two projection screens displayed back to back. One screen captures the left and the other screen the right ears of Johnny Cash wax sculptures which are on display at San Antonio’s and Grand Prairie’s Ripley’s Believe It or Not! Museums here in Texas. Both ears appear real until we notice that the right one is broken, alluding to this music icon’s current state and the overzealous fans that come to pay their respects. 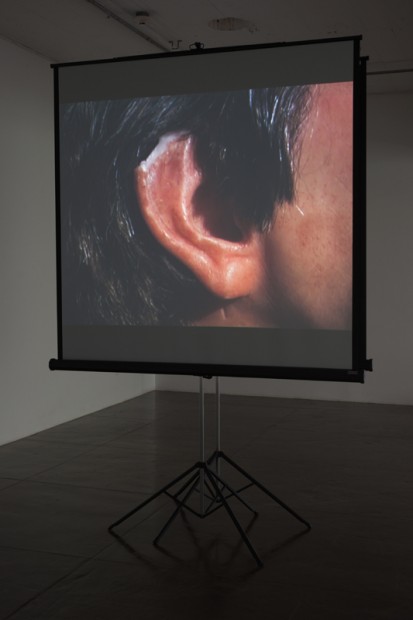 Shot, a 5-minute looped video montage, shows visitors at Dealey Plaza in Dallas, the site of President John F. Kennedy’s assassination. It’s a strange place that I have to admit causes me confusion and shame every time I drive by it and past the tourists. Mueller documents sightseers of all ages reenacting and interacting trying to comprehend what happened on that day in 1963. There is no actual monument just an X in the middle of the road making visitors bob and weave while dodging traffic for their own glimpse of Kennedy’s perspective. The site is surprisingly festive and comes off more like entertainment in Mueller’s video than reverence. 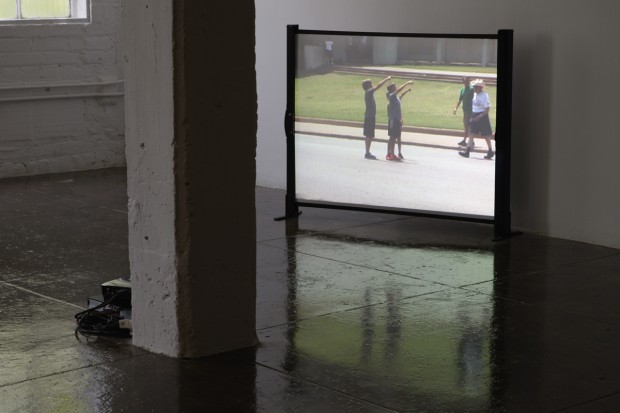 On September 11, 2002 I experienced my first personally moving moment of silence while walking to work in Manhattan. I was crossing in front of a fire station when the city went from its normal frenzied pace to a palatable standstill. I knew this moment was coming and wasn’t sure how the city or I would react a year later after having tried to move on from such loss and devastation. When the moment arrived, emotions flooded in and then the minute was over and people surged back to the present gaining composure and trying to still get to work on time. At that moment my local fire station became a cenotaph, an empty tomb.

Like the words in poet and musician Jim Carroll’s song People Who Died: “They were all my friends, and they died.” Kurt Mueller’s work puts a spot light on absence and loss. Whether it be Johnny Cash’s missing voice symbolized in his lifeless wax ears or the shape of an X meant to mark a tragic national loss, Living Still becomes a memorial to our own impending demise and the quiet absence we each secretly hope will be left in the lives of others when we pass.

[…] (IAIR) Kurt Mueller’s poignant new exhibition, Living Still, is featured in a recent write-up on Glasstire. Margaret Meehan focuses on three pieces in his exhibit, including Cenotaph (pictured above), a […]

This is a really great exhibition; thank you for writing.

Hmmmmm-will this be in Dallas at any time?