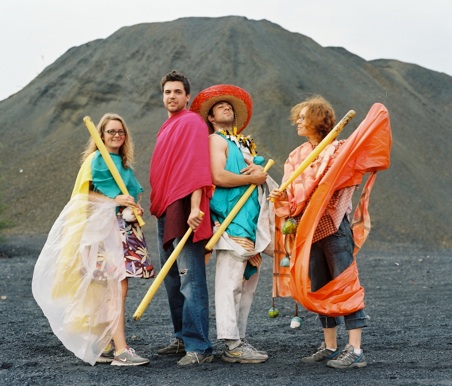 I wrote awhile back about the need for more unsanctioned, free-thinking, button-pushing art to take place in Dallas — things out in the public that recall, maybe, Dallas’ renegade spirit, or at least incite one. So I was greatly pleased to hear of  Centraltrak artist Tom Russotti’s little antic-ful operation called Aesthletics –a project that brings folks together to play sports with only a few, very loose rules so that the game is free-wheeling, collaboratively invented on-the-spot, and by-and-large wholly silly. There are games like straight-jacket softball, wiffle hurling, imaginary soccer, three-way basketball, and slag heap. In a recent interview on D Magazine’s FrontRow, Russotti explained the spirit of his endeavor, and why he thinks it’s so timely:

Tom Russotti I think the reason to do something in the social realm now is that America has all these spaces that are inhospitable to that kind of interaction. And also, as a whole, we’ve just kind of stripped away the social constructs that were always in place — little things, from manners to speaking properly to the right way to introduce someone, to more complex rituals like balls and Masonic societies. All these things had intricate structures in place that would allow someone to be in public and give them some sort of water wings so they could interact. Now we don’t have that…

When I have these ideas, it is like, ‘Oh, let’s have an idea and see how it works.’ We don’t play ‘test it and make sure it is a great game,’ but have it be so that when you play the game you have to participate in the making of the game, and not just, ‘Here are the rules, go play this.’ It is like, ‘Here is the idea, make something with this.’

FR: It takes its form solely during the acting out.

TF: Yeah, so it gets the people more involved. It kind of deemphasizes the competitive aspect of the game. If you are just a player, you’re only objective is just to play the game to win. But if you are part creator and you are thinking about how the game is structured, then you can take yourself out of that role and have this dual position as collaborator in the event and also as a player understanding the artificial, ritualistic aspect of what you are doing. And that’s kind of my critique on sports culture and business culture, which harbors this mentality in people to not think about anything else except for that role. People rely on the structures that are given to them in society and don’t become creative or inventive. They just play – they just do what they are told to do.

Tonight Russotti will stage “The Dancing and Drinking Competition”  at the Sons of Herman Hall, an event he’s staged a number of times elsewhere. In it, contestants drink and, you guessed it — dance… at the same time! Russotti says about tonight’s dance: “I walked into Sons of Hermann Hall randomly and I thought, ‘This place is amazing.’ Going upstairs to the ballroom, it is this beautiful old Texas ballroom… We are not going to play a lot of Western Swing music, but soaking it in – the space will necessarily affect the experience that everyone is going to have. In terms of participants too — getting people to take part who are going to bring something to the table, bringing their own personalities that you wouldn’t be able to predict. And it seems like Dallas is not short on personalities.”

For tips on dancing and drinking, there’s this:

Drinking and Dancing Tips from Aesthletics on Vimeo.

And for a really beautiful gem of a video about the slag heap game called After History, watch this:

After History from Aesthletics on Vimeo.