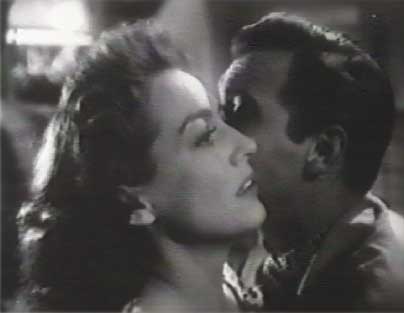 A still from Tracey Moffatt’s “Love”

Emotions roil and crest like crashing waves in Australian-born artist Tracey Moffatt’s “Handmade,” seven cinematic mashups made from 1999 to 2010 on view through Sept. 11 at Artpace. Her movie montages are made up of nearly 1,000 TV and film clips linked by common themes, ranging from the various permutations of motherhood in “Mother” to Hollywood clichés about the lives of artists in “Artist.” Working with her collaborator and editor Gary Hillberg, Moffatt has compiled these clips in fast-moving sequences that play on the emotions like a musical score.

Her films and photographs often deal with how women and people of color are portrayed in popular culture. During her residency at Artpace in 1995, she created a photographic homage to the female stars of roller derby made popular on TV in the 1970s. Moffatt is known for her professionally produced short films such as “Night Cries: A Rural Tragedy,” which screened at the Cannes Film Festival in 1989, and she has worked in television and made music videos. “Night Cries” reflects her childhood experiences as an Aborigine orphan adopted by a white foster mother.

“I know mothers because I had two of them,” she said at her Artpace lecture. “While I was working on ‘Mother,’ the emotions were just too powerful and I would break down crying. These montages were not put together as an academic exercise. I could play with the images; it gave me more freedom.”

“Mother” is the most powerful collection of moving images, highlighting mothers at their best and worst, from Woody Allen’s giant, hectoring Jewish mother in the sky to Katherine Hepburn and Jane Fonda bonding glowingly as mother and daughter in “On Golden Pond.” Moffatt’s technique in these montages is to assemble similar scenes within the larger theme, so “Mother” has sections devoted to loving mothers, yelling mothers, spanking mothers and martyred mothers.

The movie moments, sometimes with key lines of dialogue, evoke personal memories of motherhood along with reflections on originally seeing these movie scenes so that the personal and the popular become inextricably intertwined. Freed from the academic, chronological structure of most movie documentaries, Moffatt freely mixes and matches images for the most emotional impact. She said the images came from a variety of sources, from DVDs and VHS tapes, and so the quality ranges from HD crispness to pirated murkiness.

“Love” deals with all the ups and downs of Hollywood romance; then becomes disturbing when it focuses on the physical violence that can break out between lovers. A sequence of women hitting men has an element of slapstick, since the men take the blows without any emotion, but scenes of men striking women are jolting. White female bosses mistreat their sassy African-American maids in the earliest montage from 1999, “Lip.”

“Doomed,” which features disaster scenes ranging from “Dr. Strangelove” to “The Day After Tomorrow,” escalates from campy miniature smashing to CSI spectacles that have become almost ho-hum to most moviegoers. Blowing up the White House or flooding New York just doesn’t seem to matter much when it’s pixels and not people being affected.

“Artist” is filled with Hollywood stereotypes of “crazy” artists, most notably Kirk Douglas as Vincent Van Gogh in “Lust for Life.” It ends with a wild sequence of artists and others smashing and vandalizing paintings and sculptures, which might be seen as a metaphor for the way the low-brow products of the silver screen have knocked high art off its pedestal.

Along with Moffatt’s videos being shown continuously in a square space within the Hudson (Show)Room, her “First Jobs” series is mounted on the outer walls of the gallery. In these doctored, hand-colored, 1970s-vintage photographs, Moffatt has affixed her smiling face to various workers in low-end jobs, such as a waitress, meat packer, convenience store clerk and assembly line worker in a pineapple canning factory. Moffatt’s free-spirited sense of humor shines through in these somewhat cartoonish images, which somehow transform her early employment struggles into candy-colored, cherished memories. 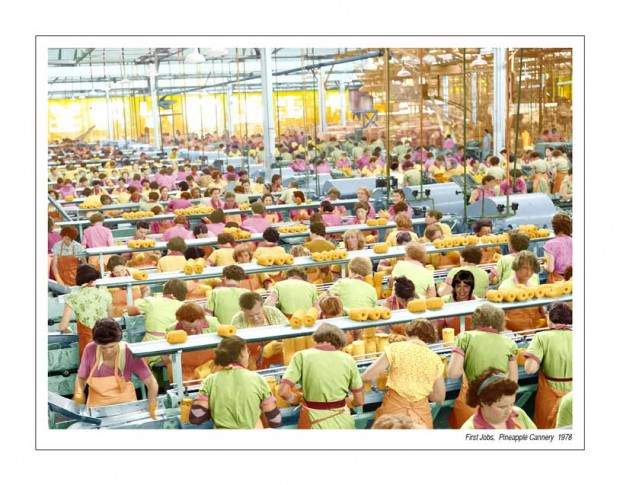 Some Fun with the Debates!