Don’t Be Afraid of the Ants

Probably one of the most stirring moments in the art world in the past year was the removal of David Wojnarowicz’s video, “A Fire in My Belly” from the Smithsonian and the public dissent that followed. The film was initially on display at the Smithsonian National Portrait Gallery as part of the exhibition “Hide/Seek: Difference and Desire in American Portraiture”, curated by Jonathan Katz and David Ward. Divided into historical periods, “Hide/Seek” charted the representation of homosexuality in American visual art from the country’s origins to the present. 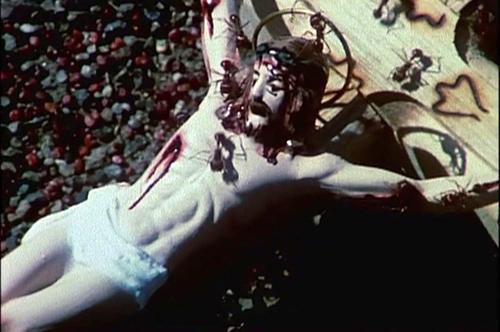 A small segment (11 seconds) of the video depicted an image of ants crawling on a crucifix, which sparked mounting criticism by conservative leaders such as Bill Donohue, president of the Catholic League (who claimed the video was “hate speech”), and soon-to-be Speaker of the House John Boehner, and soon-to-be second-ranking member of House GOP leadership Eric Cantor. The museum was threatened to remove the video or lose federal funding. Under this pressure, G. Wayne Clough, Secretary of the Smithsonian, caved and pulled the piece.

Ironically, the removal only increased the notoriety of the film and ignited arts activism among arts institutions, leading to one of the most talked about chapters in American arts in the last year and possibly years.

“Do not be afraid of the ants. Artists and academics promote culture in America, political activists do not. Americans are facing unprecedented challenges right now at home and abroad, we do not need another phony “culture war” distraction.” – James Alefantis, Board President of Transformer & Victoria Reis, Co-founder and Executive & Artistic Director of Transformer, in a public letter to G. Wayne Clough, Secretary of the Smithsonian

Public letters and responses were emailed and posted online by curators and arts leaders including one of the first responses by Transformer Gallery, a non-profit arts space in D.C.  Coverage of the incident were in major media outlets including the New York Times, NPR, New York Post, Washington Post, the Huffington Post, LA Times, and the Guardian. A crowd of about 100 people walked from Transformer Gallery on the front steps of the National Portrait Gallery to the steps of the Capitol Building with images of Wojnarowicz mouth tied in front of their face. 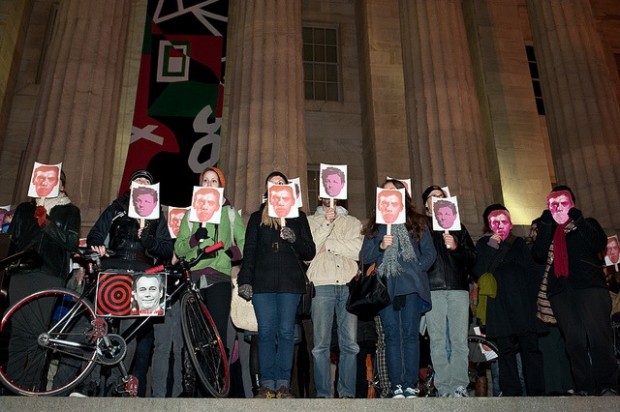 “A Fire in My Belly” spread across YouTube, and protestors Mike Blasenstein and Mike Iacovone displayed the film on their iPads and silently handed out flyers at the portrait gallery. They were removed by security and banned from the Smithsonian. Blasenstein and Iacovone later created the one-month-only Museum of Censored Art and set up a trailer in front of the National Portrait Gallery, where the film was shown along with other exhibits concerning the controversy about the film. Almost 6,500 people came to visit the trailer, which was open until the last day of the “Hide/Seek” exhibition.

Public screenings, panel discussions and readings were organized by art institutions and organizations throughout the world including the New Museum, the Andy Warhol Museum, SFMOMA, College Art Association, International Center for Photography, Tate Modern, and here in Houston at the Freed Auditorium in the Glassell School of Art organized by the CAMH, with a panel discussion by Bill Arning (CAMH), James Harithas (Station Museum) and Anne Wilkes Tucker (MFAH). The Andy Warhol Foundation, which had provided a $100,000 grant to the exhibition, announced that it would not fund future Smithsonian projects (an ironic gesture considering the impetus of removing the video was the threat of removal of funding).

Recent censorships recall how easy it becomes to remove and forget artworks and artists, such as the removal of a mural by artist, Judy Taylor by the governor of Maine, ordered because he claimed it was too pro-labor and anti-business. More close to home is the recent censorship at Texas Southern University by President John Rudley, in which workers used white paint to cover the historic murals painted by Harvey Johnson, a previous professor at TSU for 34 years and reknowned student of John Biggers. “When I bring dignitaries to campus, I can’t have them seeing that kind of thing,” Rudley said. “All art isn’t good art.” This statement seemed to be a similar perspective shared by House GOP leader, Eric Cantor when discussing the inclusion of  “A Fire in My Belly” the “Hide/Seek” exhibition, “…an outrageous use of taxpayer money and an obvious attempt to offend Christians during the Christmas season.”

The aftermath of the removal of “A Fire in My Belly”, nearly six months later brings to mind the overwhelming community response and activism it sparked. It seemed momentous to see art institutions, artists and the arts community energized around the ongoing battle of censorship in the arts.

For more on the community response to the removal of “Fire in My Belly”, please visit: HideSeek.Org