(For Part I and Part II, click here and here.)

As I’ve stressed before, the analysis I’ve done here is far from flawless. The data nonprofits report to the IRS is notoriously messy and paints only a partial picture. But it’s what we’ve got. Money is tight for everyone right now, so it’s driving a lot of decisions. For this reason, an understanding of the finances of these organizations is essential for anyone who wants to have a voice in their futures.

A look at the finances of the large and well-established contemporary arts museums in Houston, St. Louis and New Orleans leaves one thing clear: everyone’s been having trouble of one kind or another over the past few years. When I first conceptualized this series I selected CAMH as a more stable case study against which to consider the rapidly expanding Arthouse and Dallas Contemporary. Of course, as the museum is quick to point out, CAMH has experienced a significant transition of its own with the departure of former director Marti Mayo in 2007 and the arrival of current director Bill Arning in 2009. Ultimately, there are no perfect comparisons across organizations. Comparing a museum to itself over time may be the most useful exercise. There’s more consistency in a single organization over time, so you can look for what’s changed, where things might be slipping and where they’re improving.

Among this set of institutions, New Orleans’ financial situation is the most concerning to me, but all three have vulnerabilities. It’s New Orleans’ cash flow that freaks me out, very crudely approximated by a look at how long the organization’s unrestricted net assets would sustain it in an emergency. The answer: they wouldn’t. New Orleans has reported negative unrestricted net assets every year for the past six years. In other words, it must be borrowing to fund operations.

There is a series of charts at the end of this article. Figure I shows how long each institution could sustain its current level of operations with its unrestricted net assets in the event that new funding temporarily stopped coming in because of, for instance, a global financial crisis. It’s a popular metric for getting a sense of an organization’s financial stability and resilience.

If you need a refresher on unrestricted net assets: net assets are assets that would be left over after the organization satisfied all of its liabilities, and unrestricted assets are those that can be used for anything the organization deems appropriate—as opposed to funds that bear stipulations from donors and grantmakers such as “this money can only be used to fund a catalogue for the Stan Vanderbeek exhibition.” Net unrestricted assets aren’t actually cash, of course. It could take a while to turn them into cash, so it’s not an ideal measure of actual cash available to an organization for operations. However, negative unrestricted assets definitely means there’s not enough money around to fund operations. Eventually, this has to catch up with the CAC, and it will be a crisis.

CAMH’s unrestricted net assets reflect exactly the pattern one would expect over the years of the global financial crisis. Between 2004 and 2007, these assets could cover around eight months of operations. When the crisis hit, CAMH made use of them to sustain itself through the rough period, and they were depleted by the end of 2009. The example demonstrates exactly why an organization needs a reserve of unrestricted assets. They are critical to maintaining programming and operations in hard years.

Figures 2 – 5 present the rest of the most interesting information I’ve gathered from the 990s of CAMH, CAM St. Louis and CAC New Orleans. At this point, I hope the figures can stand alone for the most part, given what I’ve explained in parts I and II of this series. As always, the speech bubbles draw attention to points of interest.

In each article in this series, I’ve introduced a few new ways to approach the financial health of museums. In Part I (on Arthouse, the Dallas Contemporary and the ICA San Jose), I talked at length about operating surpluses and deficits, revenue concentration and program ratios (percent of budget spent on programs). In Part II (on Austin Museum of Art, Tucson Museum of Art and MOCA Jacksonville), I added fundraising efficiency measures to the mix. And here in Part III, I’ve introduced a quick-and-dirty measure of flexibility and stability.

By now, I’m hoping that the few and intrepid readers who’ve stuck with me have begun to get a feel for what the numbers can—and can’t—tell you. These kinds of rough calculations don’t provide answers. Rather, they reveal the right questions to ask.

In closing, I want to repeat something I said at the beginning of this series. Financial stability is not an appropriate mission for an art organization. Rather, it is a tool to use in service of an organization’s mission. The money is only there to support the mission. In fact, dogmatic pursuit of certain types of financial stability that look good on paper—large cash reserves, consistent staff size and budget growth, surpluses and so on—may be counterproductive for some organizations. In particular, I’m thinking of organizations that support very contemporary artists and artwork. Stability is inherently conservative. For this reason, it takes a lot of work and a lot of smarts to fuse financial stability with creative risk-taking. There may be healthy alternatives to financial stability for organizations that can stomach risk and won’t be embarrassed by the need to cut back sometimes or be intimidated by the challenge of expanding capacity quickly at other times. Growing and shrinking as resources become available and interesting projects materialize could be a perfectly healthy (if significantly more stressful) financial alternative.

Whatever the decision about the financial model, it must driven by mission. Period. 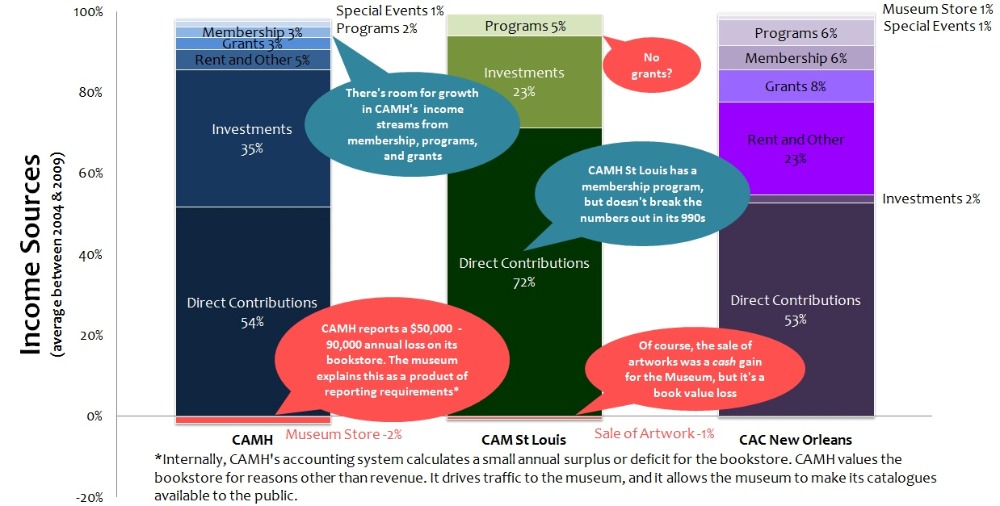 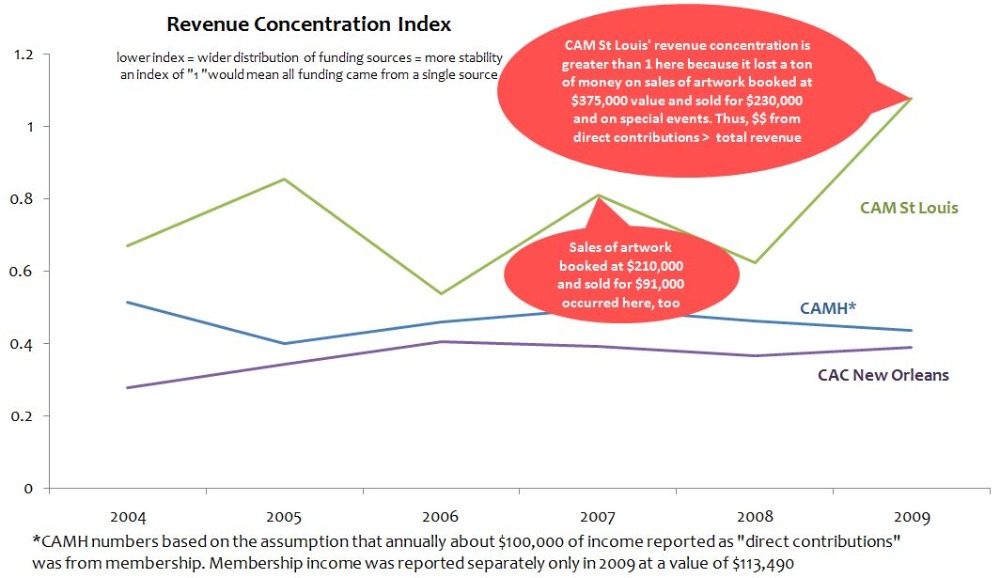 Claire Ruud has an M.A. in art history from The University of Texas at Austin and is pursuing an M.B.A. at The Yale University School of Management. She thinks a lot about feminism, queer theory, and financing contemporary art production.

Thank you for this series. I think you are dead on in your conclusion– “it takes a lot of work and a lot of smarts to fuse financial stability with creative risk-taking.”

This could all be said about artists and their own careers as well. I believe organizations that serve artists should strive for this balance that we hope artists can find. Your series reminds us that financial well being can circumscribe creative well being. Looking forward to more articles in this vein.

Could you clarify a couple of things? Would you consider “net unrestricted assets” the equivalent of free cash flow in a for-profit enterprise? Also, you write “Net unrestricted assets aren’t actually cash, of course. It could take a while to turn them into cash, so it’s not an ideal measure of actual cash available to an organization for operations.”–if they aren’t cash, what are they? I guess in a collecting institution, they could include actual artworks which could be sold. But in a non-collecting like CAMH, wouldn’t such unrestricted assets be cash (or maybe liquid securities of some sort)? Or am I missing something?

Robert,
“Net Assets” could be compared to for-profit “Equity”–both represent the difference between total assets and total liabilities. You’re right, most unrestricted net assets are probably quite liquid–bank accounts, stocks, bonds, and so on. I point out that they aren’t literally cash because I don’t know exactly how liquid without more information. By the way, generally, museums either don’t put their collections on their balance sheets or they list the value of their collections as $0 or $1. The reasoning behind this, on a basic level, is that collections are not to be liquidated to fund operations.