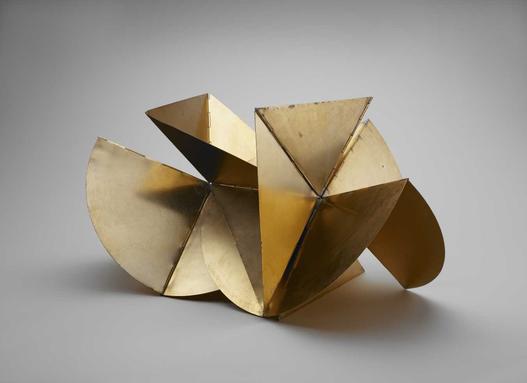 Lygia Clark’s “Bicho (Máquina)” is one of many artworks listed on the Museum of Fine Arts, Houston’s online feature, “100 Highlights of the MFAH”. Framed as “the most significant objects in the MFAH collections”, these artworks are far-ranging in media, time period, style, and geographies. What is most pronounced is the striking contemporary and avant-garde works by notable Latin American artists including Alfredo Jaar, Cildo Meireles, Tunga, Mira Schendel, Teresa Margoles, and Lygia Clark. Works by these international artists are all here in Houston, as part of MFAH’s collection.

“Bicho (Máquina)” translates to “Critter (Machine)”. “Bicho” is a gold, foldable, kinetic sculpture made of hinged aluminum sheets. Created in 1962, Lygia Clark intended for the sculptures to be opened, folded and reconfigured by her audience into a range of different shapes — all of which can move, and none of which remain static. “Bicho” portrays “Clark’s artistic obsession of collapsing the inside and outside and notions of top and bottom, front and back, the traditional elements we take for granted in a two-dimensional picture plane.”

The “Bichos” series evolved in the 1960s, when Clark along with other artists around the world were interested in defining new relationships between artist, artwork and audience.  These pieces synthesize the formal innovations of the Neo-Concretists (of which Lygia Clark is a founding member) and express their radical vision for the social role of art. By human interaction with these kinetic, geometric forms, art could become a multi-sensory experience involving the spectator as an active participant. The Neo-Concretists defined art as subjective and organic, believing that an artwork should be manipulated by the spectator, and that during this interaction the object and person would become a single entity.

“When we play with Bichos, we un-learn the traditional dialogue of artist/art and spectator, in which the spectator is synonymous with receptor. When the spectator or rather initiator plays with Bichos, he plays with life, he identifies himself with it, feeling it in its totality, participating in a unique and total moment, he exists. The gesture is not the gesture of the artist when he is creating, but it is the very dialogue of the work with spectator.” Lygia Clark

Lygia Clark’s “Bicho” would not be in Houston if it weren’t for the establishment in 2001 of the MFAH’s Latin American collection and its research arm, the International Center for the Arts of the Americas (ICAA). Conceived, led and developed by internationally renowned curator, Mari Carmen Ramírez, formerly of the Blanton Museum of Art at The University of Texas at Austin, Ramírez has crafted the most ambitious effort of its kind in the U.S. through the development of MFAH’s Latin American Art Department and the ICAA. These two entities are dedicated to collecting and showing work by the Latin American avant-garde, and plans to become the most comprehensive research center in the Western Hemisphere. On a local level, the Center has conceived and presented many ground breaking exhibitions to Houston first, that later have toured internationally; has established a rigorous publishing program that serves as the foundation for the research, scholarship of many of the exhibitions and artists in the collections; and have developed critical international symposia. This year marks the tenth anniversary of MFAH’s Latin American Art Department/ICAA and in fall 2011 the ICAA will launch a groundbreaking online resource, Documents of 20th-Century Latin American and Latino Art: A Digital Archive and Publications Project which will provide a free, universally accessible digital archive of some 10,000 primary sources fundamental to the development of 20th-century Latin American and Latino art.

“Bichos” is a part of the world-renowned Aldopho Leirner Collection of Brazilian Constructive Art, one of the most significant collections of Brazilian Concrete-Constructive art. The Leirner Collection comprehensively documents how starting in the early 1950s, artists from the Brazilian avant-garde assimilated and contested the tenets of international Constructivism, developing a unique Concrete-Constructive art. Among the cutting-edge artists and groups represented in the collection are Lygia Clark, Hélio Oiticica, Alfredo Volpi, Grupo Ruptura, and Grupo Frente. The collection was built by São Paulo-based collector Adolpho Leirner beginning in the 1960s and acquired by the MFAH in 2007.

On giving the collection to the MFAH, Leirner states in the New York Times: “I decided for Houston because, first, of the seriousness of Mari Carmen in looking toward Latin American art. The museum is studying Latin American art. They want to publish books, they hold seminars, they are sending collections abroad. They are very serious. I didn’t have any other serious offer that I bothered about, because I didn’t like the philosophy behind them. They didn’t have the background to give the collection the importance it deserves.”

Works like “Bicho” acquired by the MFAH position Houston as a global leader. Wall text from an exhibition (Brought to Light: Recent Acquisitions in Latin American Art) presented by ICAA speak to this: “the works in this exhibition constitute the core of what the MFAH envisions will one day become the most important collection of Latin American art in the United States”.

In its ten year history it seems the goal of  the Latin American Art Department and its research institute, the  ICAA has been to develop a consciousness about Latin American artists within the American public. A more larger aim might be to shift definitions of American Art and re-frame art of the Americas in a more integrative and comprehensive manner. As many of our “American” artists remind us through their work (while distinct) there are parallels in North American, South American and Caribbean histories and culture… us Norteños just sometimes like to forget that America is plural.

A Pan-Latinidad Vision: Roberto Tejada in Conversation With...

Is <> some Dallas competition for Glasstire? Is it flattering that others try to do the same shuffle of the deck of art in Texas?

The foregoing comment had to do with the site Texas Contemporary Art dot com.