by Lucia Simek May 16, 2011
FacebookTwitterEmail 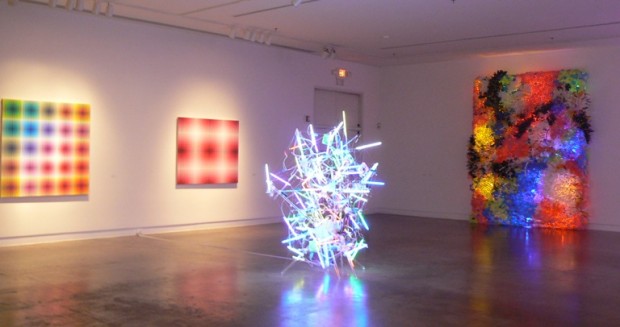 Independent curator June Mattingly has put together a show at the McKinney Avenue Contemporary called Starry, Starry Nights: Five Light-Filled Installations with work by five artists — Adela  Andea, Chris Lattanzio, JeremyMcKane, Susie Rosmarin, and Billy Zinser — that puzzled me and irked me more than a little. Nearly all five artists deal with light somehow in their work, the exception being Billy Zinser who only uses light  in this show in the form of a projected video, and in the sense that his inflated sculpture on the roof, a Macrodon, is as “light” as air, I guess. And I get that Mattingly is referring to Van Gogh’s Starry Night in the name of the show, though I am not sure what “night” that has to do with anything in the work shown here, except that some of it could powerfully glow-in-the-dark in the dark of the night, or  induce a dark night of the soul, as one of these installations here almost did to me. 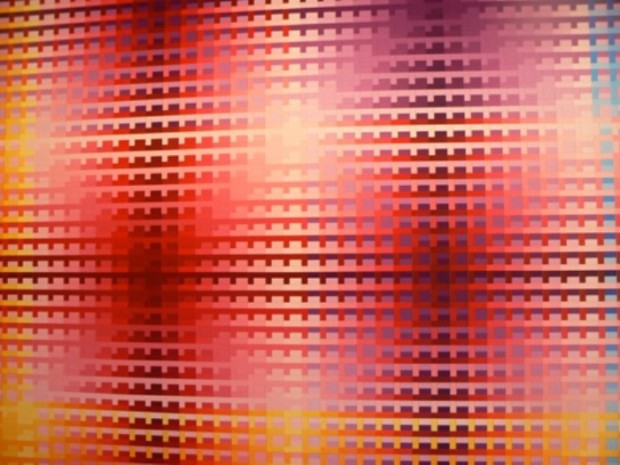 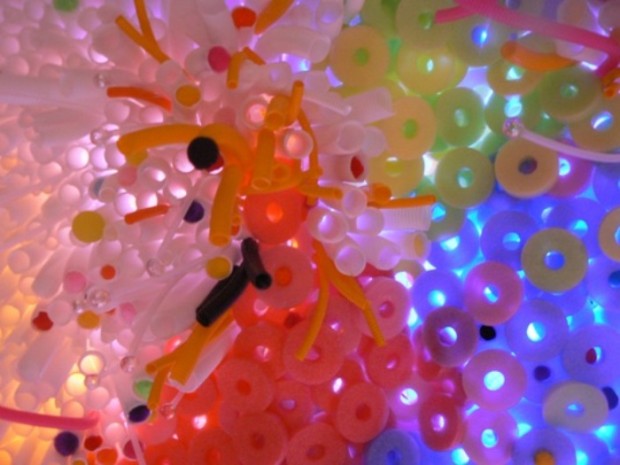 The connections between Susie Rosmarin and Adela Andea’s work are apparent. Rosmarin’s optically gridded, complicated, candy-colored paintings are a good pairing with Andea’s equally complicated sculptures, which are bright, saccharine tangles of lights, plastics, Styrofoam and whatnot. The gridded science of Rosmarin’s paintings creates the illusion of three dimensionality, like digital hills, that “cast” off light and play with Andea’s mounds of lighted gadgetry. 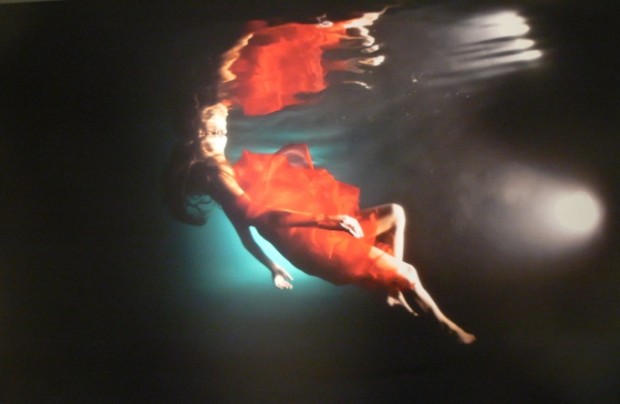 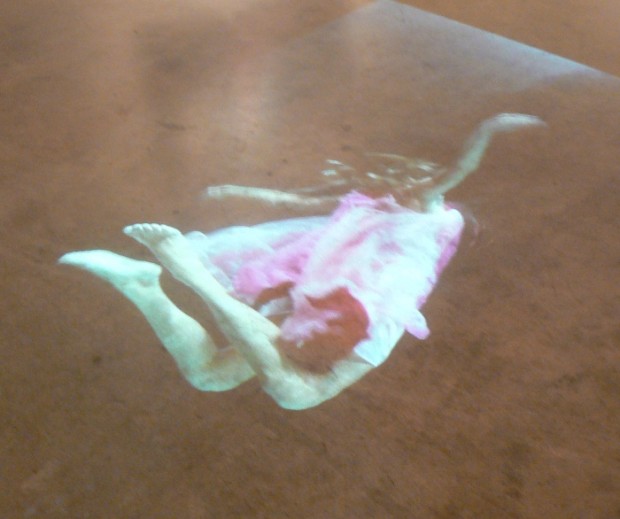 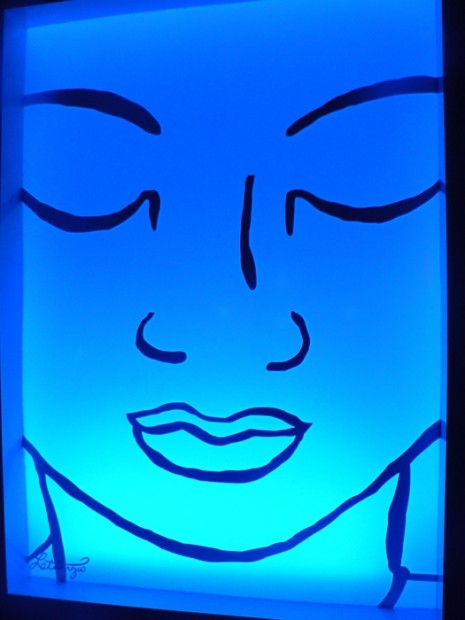 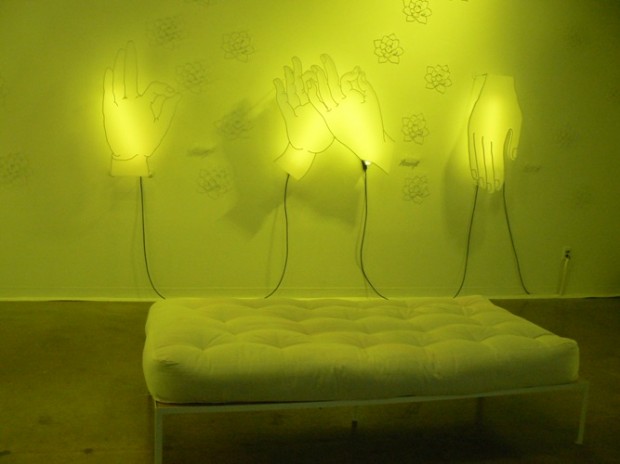 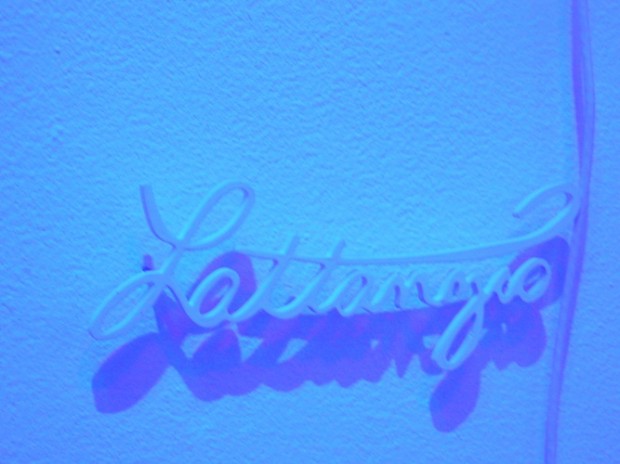 The dooziest light doozy of the show goes to artist Chris Lattanzio who has created, in the small gallery, an installation called Lotus Room —  an experience which he calls an Immersion.   “Here you can walk through and immerse yourself in his art — painting with LED lights and drawing with 3D lines,” says the artist statement for the show, which reads like an automotive write-up as he describes the various dimensions, technical equipment and processes used in making the work, all of which betray Lattanzio’s less-than-humble amazement at what he  fancies as his artistic ingenuity. 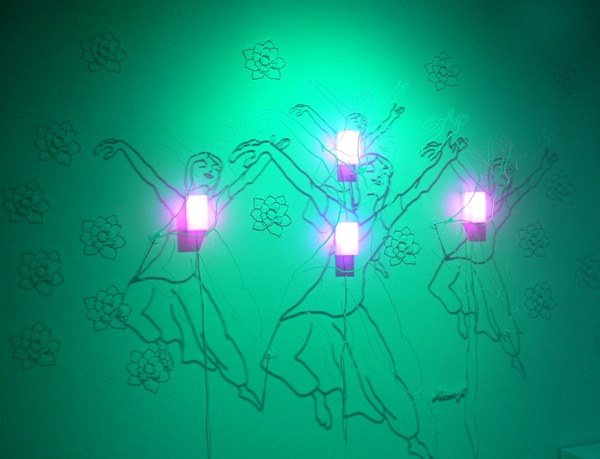 The room that Lattanzio has decorated here with his art (and “signed” with steel, laser-cut signatures mounted to the walls six times) is meant to be a place to relax — there’s a mattress in the center of the space where you can lie down and watch the room’s LED lights change colors while listening to stereotypical meditation music Lattanzio commissioned for the show, all while gazing at steel-cut lotuses and skipping girls that dangle from the ceiling or are rigged to the wall. As the colors shift, shadows from the skipping girls and lotuses shift on the wall, causing totally unnatural eye adjustments that left me dizzy, discombobulated, and subsequently sick-feeling, which compounded the soul-ache I was catching from the utter insipidity of Lattanzio’s sentimental work. 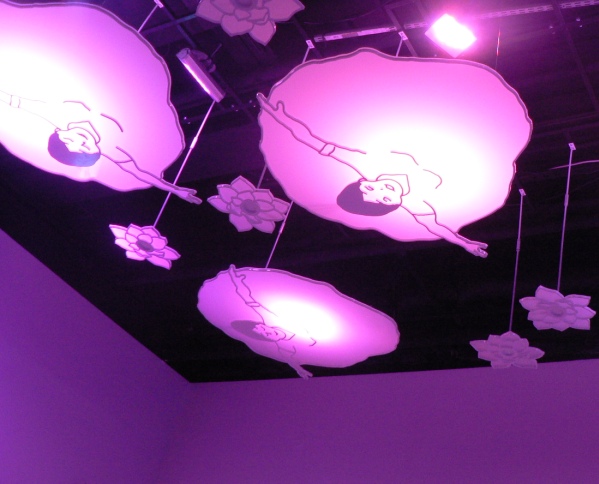 There has been some debate as to whether or not artist Chris Lattanzio’s installation here is actually some kind of ironic jab at yoga and Eastern-inspired religious practices that have come to define and facilitate a very contemporary need for serenity or calm in a hectic and loud Western culture. I wish I could say that Lattanzio is bold enough, brazen enough to act as a critic of  spiritual fads/exercise trends that are very removed from their rich roots in the East, just as Werner Herzog was in a recent interview in GQ. When asked if he could ever be with a woman who took yoga classes, Herzog said:

“Of course not. Of course not. I think there should be holy war against yoga classes. It detours us from real thinking. It’s just this kind of…feeling and floating and meditation and whatever. It’s as tourism in religions. People all of a sudden becoming Buddhist here in Los Angeles.”

But Lattanzio isn’t being critical, nuanced or even ironic with is work here in Lotus Room, which is to say he can’t get away with anything like Herzog can. Lattanzio’s work here  is as earnest as apple pie, and just as syrupy.