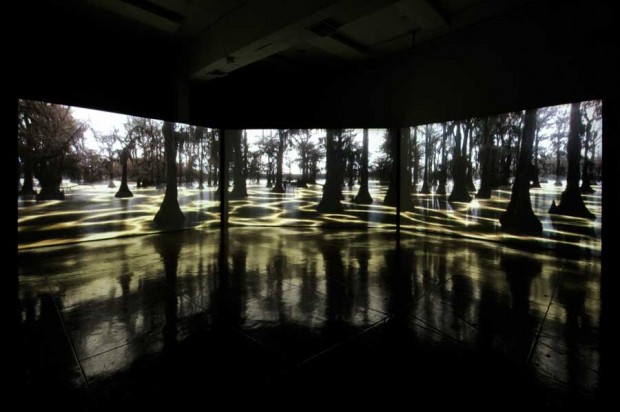 With newspaper headlines reading “It’s in the Water,” Kelly Richardson’s “Leviathan” acquired extra topicality. Though the headlines referred to radiation in Japan, the glowing translucence flickering through the swamp waters of Caddo Lake in the Canadian/English artist’s immersive three-channel video installation took on even more sinister implications. Like a scene from “Cloverfield,” the monstrous, implied threat is intensified by what isn’t seen.

While artists’ videos often fall short of the magic of Hollywood CGI effects, Richardson, working alone, used cutting-edge software to create an image that would make DreamWorks proud. Nearly 12 hours of processing and output was required for each two-minute clip of high definition video in the 20-minute loop. Projected on three screens that fill the viewer’s peripheral vision, “Leviathan” provides an absorbing, meditative environment for contemplating threats to the natural world.

“I always try to come up with effects that are on a par with the film industry,” Richardson says. “I tried to connect current reality with a futuristic effect to create a plausible future. This piece is slow enough that you can lose yourself in it. I want people to see what is happening to the environment more clearly.”

Standing on a pier near Uncertain, Texas, Richardson filmed the cypress swamp on the day before the big freeze hit this winter and there is a still, foreboding quality to the almost static scene. Using the computer, she eliminated all signs of life, except for the quick flash of a ghostly bird. An ominous soundtrack heightens the suspense. While the Spanish moss moves slightly in the breeze, glowing streaks of light zip through the murky water like some kind of alien life form. 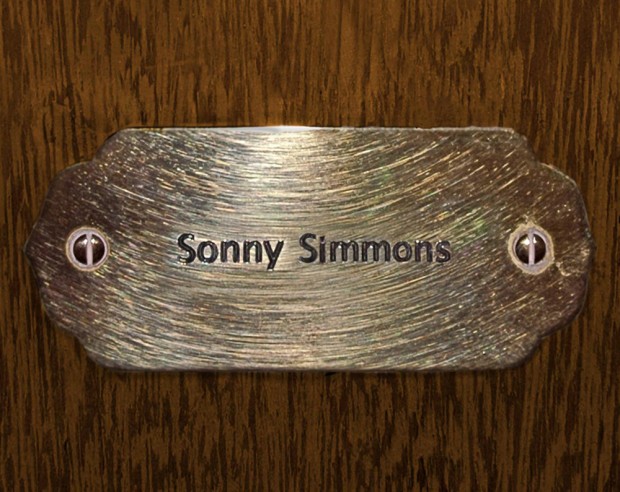 Austin-based Devon Dikeou, who has an MFA from New York’s School of Visual Arts, encountered rooms named after American and Latin American jazz greats in a Buenos Aires hotel. She took photographs of the brass name tags, which she has transformed into a jazz wall of fame in “Mamas Don’t Let Your Babies Grow Up to Be Cowboys” with the help of an octogenarian tenor saxophonist she met in New York, Sonny Simmons.

Though not really a jazz fan when she started the project, Dikeou was intrigued that these American artists were so highly regarded in Argentina. But any jazz fan who’s traveled the world knows that foreigners are often better acquainted with jazz history than most Americans, partly because of broadcasts by Voice of America and State Department-sponsored tours by jazz musicians. Jazz transcends language barriers better than any other American art form.

“Some of these jazz names people will recognize; others less so,” Dikeou says. “The project is partly a commentary on the curatorial process, where a curator puts different artists together and tries to match them up. By appearing with the well-known jazz musicians, the lesser-known ones may become better known.”

But simple errors, such as the fact that several of the names are misspelled, raise niggling questions about curatorial authority. Dikeou also added a giant brass nameplate, probably created with Photoshop, for her friend, Simmons, a free jazz pioneer who recorded with Prince Lasha, Eric Dolphy and Elvin Jones in the 1960s. But personal problems sent his career into eclipse in the 1970s and 1980s following a move to the West Coast. After years of scuffling on the streets, he emerged in 2000 with a well-regarded trio album, “Ancient Ritual,” that re-energized his career. As part of the Artpace installation, Dikeou collaborated with Simmons to produce a limited edition CD, “Sonny Simmons Quintet Performs the Music of Charlie Parker.” Copies were being given away free when the exhibit opened. The last track features Simmons rapping about 56 jazz greats that he met over the years, including several whose name plates are on display and reproduced on a Wikipedia page devoted to “Mamas Don’t Let Your Babies Grow Up to Be Cowboys (artwork).” 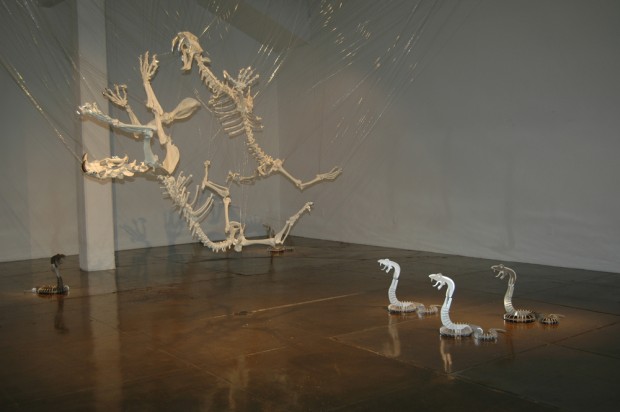 E.V. Day is known for her deconstructive fashions in “Exploding Couture,” and she continues her exploration of the feminine mystique with “CatFight,” partly inspired by the infamous TV cat fights of shows such as “Falcon Crest” and “Dallas.” However, Day staged her fight using the skeletons of a pair of saber-tooth cats battling in mid-air, suspended from the ceiling by plastic monofilament lines.

Day acquired the resin skeletons from Bone Clones Osteological Reproductions, which cast them from remains discovered in the La Brea tar pits near the Los Angeles County Museum of Art. Saber-tooth cats also lived in the San Antonio area at the end of the last Ice Age. The skeleton of a Homotherium serum found in the Friesenhahn Cave in far north San Antonio is currently on display at the Texas Natural Science Center at the University of Texas in Austin.

Perhaps symbolic of the evolution of feminine warfare over the centuries, Day provided her cats with some contemporary fashion sense by painting their claws and giant saber-tooths with silver nail polish.