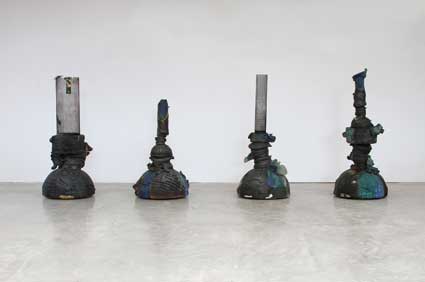 
An influential figure in ceramics for 40 years, Steve Reynolds pioneered the idea that clay is supple and malleable and can be used like any other media to ponder difficult philosophical and aesthetic issues. Seeking to elevate ceramics to the same high art status as painting and sculpture, Reynolds’ far-reaching work ranges from non-functional vessels that satirize ceramic stereotypes to metaphysical puzzles in images, objects and texts.

Catherine Lee, a nationally-known artist with a studio in Wimberley, assembled a mini-retrospective of the long-time UTSA art professor, “Steve Reynolds: Serial Investigations in Sculpture,” which is on view through Feb. 23 at the UTSA Art Gallery. Accompanied by a well-illustrated, thoughtful catalog, the exhibit is touring to Texas A&M, Corpus Christi, March 10-April 15.

Reynolds (1940-2007) was a president of the National Council on Education for the Ceramic Arts and a member of the International Academy of Ceramics, based in Geneva. After earning degrees from Denver University and the University of Colorado, and studying at the San Francisco Art Institute, Reynolds began his teaching career at Odessa College in West Texas and later taught at Texas Tech University. He came to San Antonio in 1977 and was among the first group of artists to show at the Blue Star Art Space when it formed in 1986. 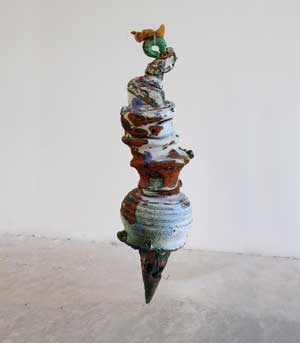 “I think Steve opened up ceramics and helped make everyone understand that it is not all about vessels,” says Lee, who was introduced to ceramics by Reynolds while she was a visiting artist at UTSA. “He worked in an intensely serial manner when researching and creating forms or ideas. He was constantly gathering, searching, sorting, making use of random occurrences and improvising.”

Late in his career, Reynolds, whose beaming sense of humor shines through in most of his work, began making expanded multi-media wall pieces that function as cognitive maps, charting his ideas about art, life and philosophy. A portion of one of his key works, “Aleph,” is included in this show, a framed obituary page with a grid of bird skulls of diminishing size and, below, the word “FINIS.”

The original piece stretched across an entire wall and told the story of mankind, beginning with a mythical life-giving serpent and Adam and Eve figures who give birth to generations of humans, rendered in twisted porcelain figures resembling primitive rag dolls, ending with the piece here, “Aleph: Obituary.”

“It’s amazing how this whole piece relates the history of mankind, but then it ends with birds, not humans,” Lee says. “I think ‘Aleph’ shows how connected we are to everything. Our survival is tied to the survival of the Earth and all its’ species.”

Bird forms often stand in for the human figure in many pieces that look as if Reynolds made them by idly squeezing the clay in his hands. 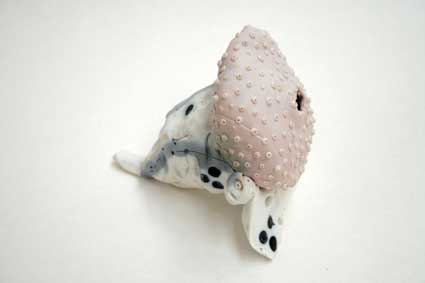 Tea cups and saucers, among the first things ceramic students are required to make, is a recurring motif in Reynolds’ work, though steeped in Mad Hatter whimsy. There’s a whole series with strange flourishes in dazzling colors with suggestions of coral forms, alien flowers, insects, desert plants and rocks. His earthiest works are the “kettle pots” suggesting ancient rock mortars or miniature volcanic craters, but Reynolds splattered them with an assortment of pigments, some metallic for shiny, gleaming surfaces.

Among the most delicate works are some that have never been displayed before, “Gifts for Daphne,” made for his wife. Small and somewhat crude, they suggest a rich inner life, postcards of his emotions, with forms evoking sea shells, a prop from a Tim Burton movie, battered cowboy boots, antique furniture and subterranean treasures.
“Black Stacks,” his largest and most dramatic series, evokes the smokestacks of the Industrial Age, with pipes and cylinders of mesh wire rising out of molten-tar-like pedestals.

Many of the last works Reynolds made reflected the influence of Robert Rauschenberg , especially in his use of multilayered prints, cut-up wooden elements, paint, found images and multimedia collages. While spending a summer at the Art Academy in Oslo, Norway, Reynolds began packing all the information in his spread-out wall pieces into compact 21-by-21-inch squares in his “Tiles,” which feature layer upon layer of printed imagery drawn from post cards, letters, music scores and other sources as well as colorful glops of clay, paint and pigment in a compressed stack of information.

In her catalog essay, Kathleen Whitney notes, “One way to comprehend Reynolds’ work is to think of it as a singular, continuously evolving entity rather than a series of discrete ‘pieces.’ The concentrated thrust of his ideas acts like a rock thrown in the water; his work is the impact, concentric rings of thought and image.”

Reynolds called his work “sheer imaginative play,” but it represents a radical departure from what had distinguished ceramic art before, the sturdy utilitarian object made from a single lump of clay. His work uses clay to animate the imagination, dancing between several kinds of sensibilities, integrating different systems of thought in multimedia explorations of vast intellectual and emotional realms. 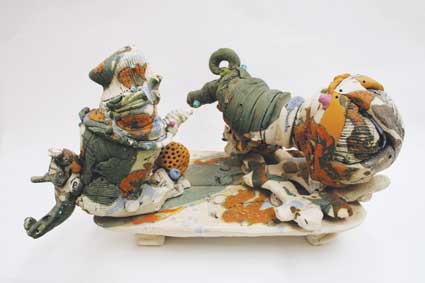 I am so sorry to hear that Steve has passed. He was my college instructor in sculpture at Odessa College. He was also one of the judges of the Junior Service League that gave me a scolarship to Odessa College. I was one of his first students. I remember when we was pouring one of my bronzes – hot metal bronze blew out of the top of the mold and burned right threw his shoe into his foot, he was in pain for awhile. Steve and I had alot of fun in and out of the class room, he would always be the life of the party. He became more like a brother to me than a teacher. He told me that my work reminded him of Henry Moore, I said hum, it reminds me of Jimmy DeMoss. LOL. I have lived in Kerrville since 1989 and had no idea I lived that close to him. I sure could have talked to him about alot of things. He was as close as a brother to me, he talked to me about girls he liked when we were at Odessa College. Steve will really be missed by many, and already is. Gods speed Steve till we meet again. friends forever Jimmy L. DeMoss V