M at Fort Worth Contemporary Arts 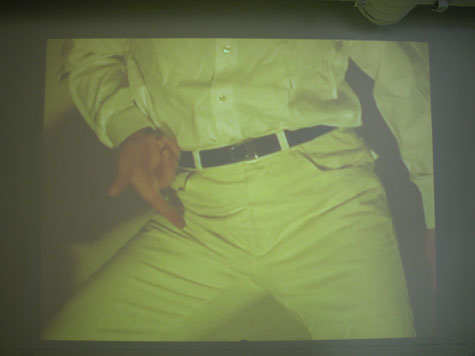 I’ll have to take Schjeldahl’s word for it regarding baseball, but he’s right, per usual, on the art part. As proof, take the artist M’s show at Fort Worth Contemporary Arts. The name of the show: Let’s Build a Fort! (Together We Can Shield Ourselves From the Fear and Worry Within the Blackness of One Hundred Million Nights) joyously tickles right off the bat. And his work here—a handful of drawings, a sculpture and a gem of a video—play with images of youth, mythologies and memory with a kind of wisdom that only the joyfully pure of heart could render. In that wisdom, the artist also has a white-knuckled grasp on the odd, and often disturbing, realities of growing up. But like Peter Pan, M’s vision of boyhood is nothing if not defiantly magical. 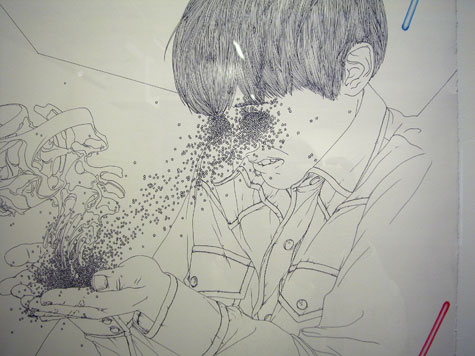 I wasn’t expecting to see many of M’s meticulous, gasp-worthy ink drawings in this show, but was delighted to find a generous offering of them. These are wrought with M’s usual penchant for intricate myth-memories—a hyper-detailed, imagined moment of discovery or encounter that spins out a sparkled, starry vision for the figure in the picture, who is always a pre-teen boy. In one, Until We Meet Again, Please Enjoy a Dream, a boy crouches down, grimacing, as his eye sockets pour out reams of perfect little stars into his cupped hands, while a fleshy, decomposing beast writhes like a Chinese dragon across the page away from him. The moment looks painful, horrifying, and we can just hear the kid about to say, “Jeez…what’s happening to me?” But the tiny stars, each just like the other and all full of pixie sounds, tame the picture into something other than nightmarish. Full of beastly release and feather-lightness, the picture is orgasmic.

That kind of pressure-filled energy packs each of the drawings here; and in all of them innocence meets an emblem of experience: a youth affectionately cradles a phoenix or chats on the phone while lions and tigers roar behind him. 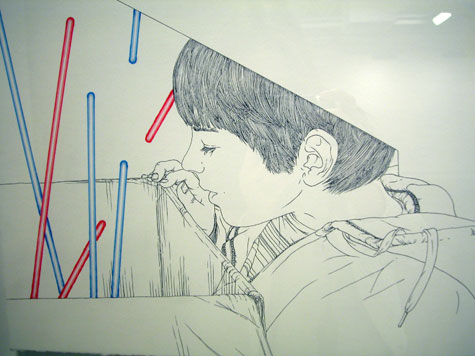 In all of the drawings, including one scrawled across a wall (if you can call M’s mark-making magic, scrawl), red and blue laser-ish capsules slice through the space of each scene, conceptually jumping around the room from picture to picture. These compound the retro-feel of all the work here—bowl haircuts and vinyl windbreakers abound—and lend a super-hero speed to each picture, infusing them with a historical mood that any child of the 80s will palpably feel. The laser beams begin their trajectory on the floor of the gallery, in a sculpture, as neon rods bursting through the skull of a motorcycle helmet emblazoned with an old Thunder Cats sticker. The piece feels like the hot core center of the artist himself—playful, but danger-loving, and marked with dreams of perpetual, climaxing adventure. This work, though, even with all of its piercing thrust and brightness, gave me a kind of archeological melancholy, forcing me to admit to time’s steady beat. When did my childhood become retro? That seems to be M’s deepest concern. 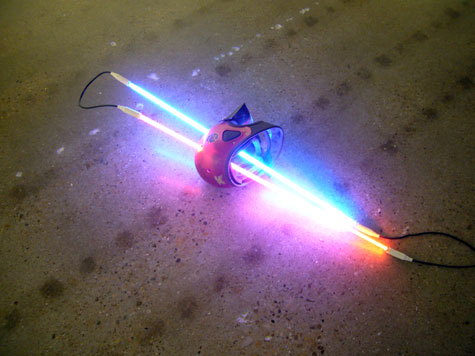 He handles the perennial crisis of time, and fends off fears of vanishing youth, with boyish trickery and zeal in a stunning little video piece called From Here to Maturity. Projected on the back wall of the gallery, the film opens with a shot of a drab and empty carpeted room, achingly sickly yellow-colored, and hung with an ugly chandelier. A monotone beat thumps through the speakers, setting a pace that feels like dread. I half expected one of the artist’s fantastical creatures to pop up and scare me half to death, and I braced myself for it. Instead, M himself is seen jumping diagonally across the room, over and over, as if he were about to do a cannonball into a pool, only he disappears each time before he ever lands. The next scene shows the artist dressed in a white shirt and skinny white pants, hiked up a little too high. He walks closer to the camera and then begins to gyrate his hips as the music turns disco. M pumps and grinds, pausing now and then to point to his goods with bravado. And then it’s more pelvic circus tricks, much to the mounting laughter of the audience. From this scene, we jump to the next in which M runs full tilt toward the camera, over and over, laughing, smirking, having a damn good time.

Somehow, the video isn’t smoldering with burning urge, much as it sounds like it could be. For all his package-thrusting, the artist keeps a boyishness about him that parodies the idea of sex and makes it moot, and in that, he surrenders his manhood. He is uncategorizable at that point—so outside of age or gender he becomes a kind of incorruptible. And that’s his offering to us, his rapt audience—himself—a gleeful balm against all that ails us. A fort.

M: Let’s Build a Fort! (Together We Can Shield Ourselves From the Fear
and Worry Within the Blackness of One Hundred Million Nights)
Fort Worth Contemporary Arts
January 22 – March 6, 2011

Lucia Simek is an artist and writer living in Dallas. She co-founded the culture site Renegade Bus in 2009, and is a frequent contributor to D Magazine‘s arts blog FrontRow.