Annabel Livermore at the Muskegon Museum of Art 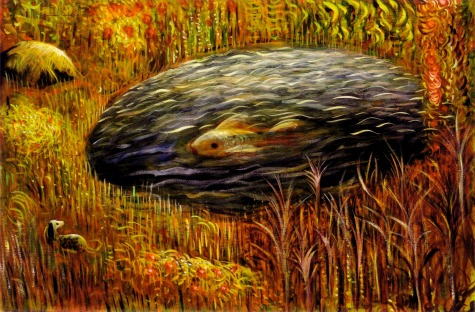 It glides in under the radar while I’m enjoying a patch of midday sun or clear night sky: without warning, I miss Texas. Not the heat and air pollution and lack of regard for the public realm, but the art. Since moving back to my home state of Michigan after nearly 25 years in Texas, I sometimes bitterly miss the extraordinary vitality of its visual culture. Yet, that said, I’ve met art professionals and institutions here whose devotion to the field would be impressive any time and any where, but truly inspires in an economy that went south—literally and metaphorically—long before November, 2008.

A case in point is the Muskegon Museum of Art, which I vowed to visit as soon as I unpacked my last box last fall. Memories of the MMA’s annual juried show drew me back, along with its elegant beaux-arts building. What I didn’t expect to encounter was a bijou installation of works by El Paso artist Annabel Livermore.

The first public showing of Annabel’s work in the Midwest, Remembering Newaygo County: The Symbolist Paintings of Annabel Livermore featured 20 paintings of trees, hills, sky, flowers and small bodies of water, executed with festive fervor and presented in ornate frames under glass. 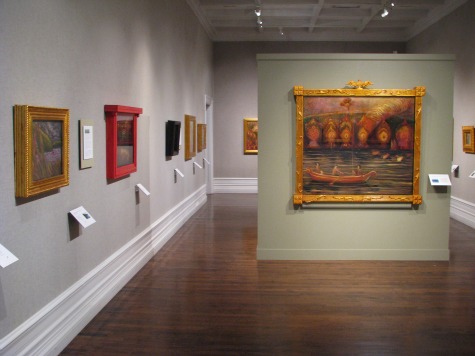 Overlaying the work’s physical beauty was its conceptual focus on relationships between memory and identity; development of a visual language suited to communicating those relationships; and the interaction of personalities within an individual, such that a more complete whole is achieved.

Each painting was accompanied by a lovely Annabel Livermore comment on the work’s significance. Scattered throughout were photographs of the bucolic meadows, ponds and parks represented in the paintings. The pictures that especially moved me evoked a mash-up of van Gogh, Ryder and Bacon, steered by a sense of feminine gentility. I had never seen so many Livermore works in one place, and never outside of a private collection.

A phone call later and I had an account of how the exhibition came to be. It was a tale of attentive patronage, curatorial chutzpah and administrative acumen, beginning with the recognition that many artists currently living and working in Texas come from other places. Livermore’s alter ego, James Magee, sojourned far and wide for decades before settling in El Paso. Livermore, the shy librarian, may not have shared Magee’s wanderlust, but she does share his roots in Newaygo County, Michigan (Newaygo County falling on Muskegon County’s northeastern border). Artists move away, come into their own and are reconnected with their places of origin. 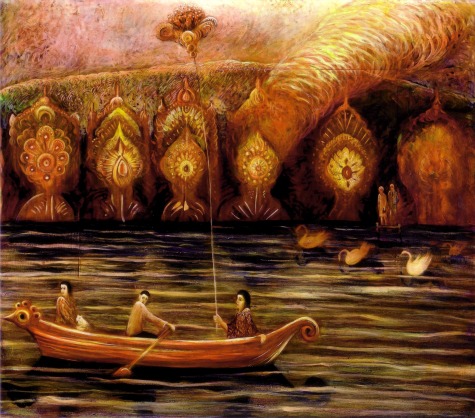 Rowing Past the Shrines of the Ancestors during the Forty-Seventh Biannual Festival of Lights on Pickerel Lake (2007-2009), oil on panel, 48 x 54 inches, photo: Marty Snortum

The MMA’s tradition of collecting contemporary American art and supporting regional artists feeds into the story as well.

The institution was founded by Charles H. Hackley, a lumber baron who stayed on in Muskegon after all the trees were cut down. Vowing that the city would reinvent and distinguish itself, Hackley invested in progressive schools, a hospital, public library and city park, among other endeavors. He also planned for a public art museum, but died before its inauguration in 1912. By the time it opened, though, the then-Hackley Art Gallery already owned Henry Ossawa Tanner’s Holy Family (1909-10), as well as pictures by tonalist Leon Dabo, impressionist Lawrence Mazzanovich and the landscape painter Ralph Blakelock. Key paintings by Whistler, Homer, Curry and Hopper followed. More recently, the museum has added works across a wide range of media by Roger Brown, Nancy Callan, Elizabeth Catlett, Whitfield Lovell, Dante Marioni and Aminah Robinson—as well as an important painting by Livermore. European works include significant Early Netherlandish and German paintings, and French late-nineteenth through early-twentieth century pictures. Studio glass and African American art have become two areas of special focus.

All along, the museum has also nurtured artists in the region, not only through exhibitions, but by hosting the above-noted juried show and presenting small-group and one-person exhibitions for artists in or from West Michigan. Artists like Annabel Livermore.

MMA Senior Curator Jane Connell learned about Livermore (and Magee) from a pair of the museum patrons, and knew immediately that she wanted to organize an installation of Livermore’s paintings of places in Newaygo County. It was a chance “to reveal the institution’s strengths, indeed its very existence, to a national audience and to important persons in various fields,’’ Connell said. With the museum nearing its centenary, “who knows how these contacts may come into play again in the future?”

More particularly, Connell’s goal was to reveal Livermore and Magee intimately, in their home setting of West Michigan, and to demonstrate that Livermore’s “ultimate spiritual well’’ is located in Newaygo County.

Connell’s research for the exhibition and its clearly considered, poetically written catalogue, took her to El Paso and to Dallas, to Pickerel Lake and to the gravesite of Magee’s parents in Fremont, Michigan. She visited The Hill, Magee’s totemic installation in the desert near El Paso, and the chapel that Livermore has endowed, at El Paso’s Thomason General Hospital.

“I wanted to examine one manifestation of the creative alter ego,” she says. “Memory, myth and transcendence; the importance of family and friends; and the abiding influence of our ancestors are recurring themes throughout Annabel’s painting. And, indeed, are integral to Jim’s sculpture as well.”

The installation allowed Livermore’s works to stand for themselves as objects, and to communicate the themes that Connell responded to. As a viewing experience, it was perfectly measured—just enough to convey the work’s memory-saturated reality without provoking an overload. Thankfully, the catalog also is precisely balanced: it documents the exhibition and brings the curator’s keen insights into fuller focus.

For now, it seems unlikely that Livermore’s Michigan paintings will enjoy a comparable showing in El Paso or Houston. But I wouldn’t be surprised if Muskegon viewers ask for a display of Texas scenes by their newly found regional artist.

Writer and art historian Janet Tyson is a former Fort Worth resident. She now lives in Spring Lake, Michigan.