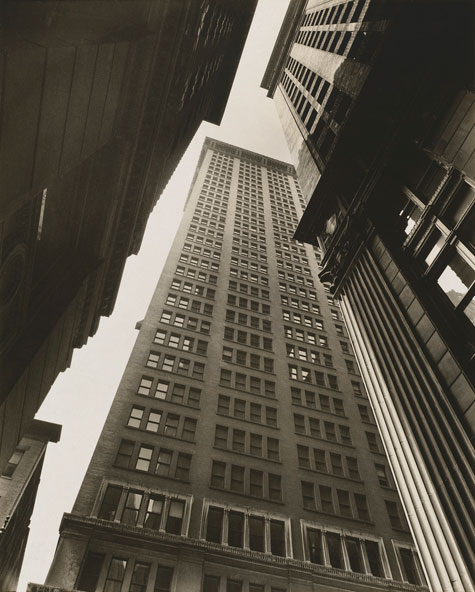 The 1930s marked a complex intersection of events in America. The Stock Market Crash of 1929 and the ensuing collapse of the American economy set the course for what was to come in the following decade. Documentary photography ended up playing a key role in the economic recovery. Concurrent with an upsurge in industrial mass production, worldwide mass media communications were born. Periodicals, books and small intellectual journals were no longer solely driven by text and illustration. Photographs flooded the country, reaching record numbers of people. Meanwhile, modernism, a European aesthetic concept that emphasized simplicity and repetition, was quickly working its way into the American psyche, especially as the Depression took hold.

American Modern:  Abbott, Evans, Bourke-White hatched out of a scholarly friendship between Jessica May and Terri Weissman, who were in Washington, D.C. in 2005 working on their dissertations. May, now the assistant curator of photographs at the Amon Carter Museum, was researching Walker Evans. Weissman, assistant professor of art history at University of Illinois at Urbana-Champaign, was researching Berenice Abbott. They both agreed that there was a new story to be told about American documentary photography in the 1930s and that the work of Evans and Abbott made perfect vehicles.

During their early discussions, May and Weissman determined that Margaret Bourke-White was pivotal to the story they wanted to tell, so they turned to Sharon Corwin, a Bourke-White expert. Corwin, the Carolyn Muzzy director and chief curator at Colby College Museum of Art, agreed to join May and Weissman in their pursuit: to redefine the golden age of documentary photography in the United States between the late 1920s and early 1940s through the work of the three photographers. The final results are on view at the Amon Carter Museum in Fort Worth through January 2, 2011, as well as in the illustrated companion book to the exhibition, American Modern: Documentary Photography of Abbott, Evans and Bourke-White. 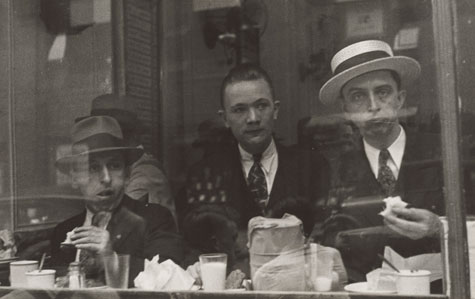 At the end of the 1920s, Abbott, Evans and Bourke-White, all born and bred in the Midwest, ended up in New York City, the center of the publishing industry. The three photographers were part of the documentary model, but each developed totally different ideas about what documentary photography was. Their photographs were exhibited together in galleries and museums starting in the early 1930s, but they were never close allies.

The exhibition at the Amon Carter Museum opens with two pages out of Bernice Abbott’s 1929 scrapbook, filled with small black and white contact prints of New York City landscapes that she made after returning from an eight-year expatriation in Paris. Including the scrapbook in this exhibit is a coup of sorts—it has never left the Metropolitan Museum of Art until this show.

The Abbott scrapbook images point the way to the rest of the exhibit. In them, we see Abbott tilting her camera upward, a radical move for the era, into the emerging skyscraper canyons. Influenced by European modernism, Abbott and Evans endeavored early in their careers to bring visual innovation to their compositions through extreme perspective points and severe, abstract camera angles. Using compact, handheld cameras, both photographers roamed the streets of New York, looking for subject matter.

In the exhibition’s second gallery, there are several examples of Evans’ “captured moments in time,” the most poignant of which is when he walked past a Lexington Avenue lunchroom window in 1929 and caught three men mid-sandwich. An example from Abbott’s series on the Lower East Side and a makeshift Central Park Hoovervilles are installed nearby. 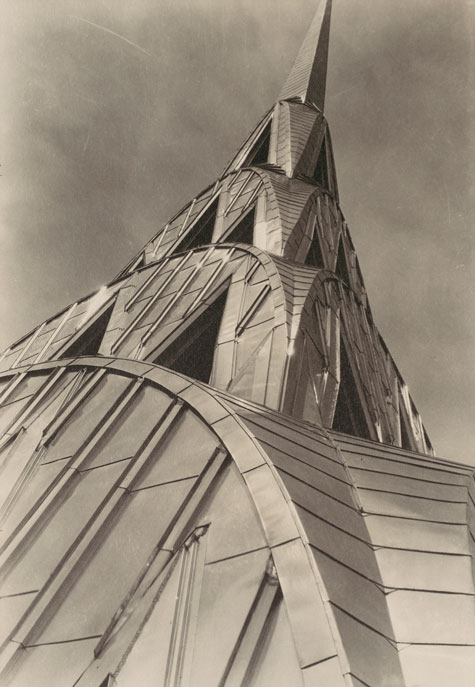 Bourke-White is another story. The youngest of the three featured photographers, she enjoyed commercial success for most of her career. Bourke-White found her niche early on, beginning in the late 1920s with her self-assigned Otis Steel factory photographs, a selection of which are included in the American Modern exhibition.

Visually, Bourke-White found inspiration during her three trips to Russia in the early 1930s. She was also inspired by Hollywood cinema, evident in the dramatic way she often lit her subjects, as she did at the First National Bank in Boston. By pure coincidence, she made the photograph “First National Bank, Boston” while on assignment there on the night the stock market fell on October 24, 1929.

Despite the financial security Bourke-White received from her corporate commissions and staff positions at Fortune and Life magazines, she was often conflicted about what she was photographing. Even though her photographs often glamourized capitalistic pursuits, they also subtly pointed to Bourke-White’s underlying sympathy with the disenfranchised factory worker.  From The Towering Smokestacks of the Otis Steel Co., Cleveland, 1927-28 to the later Chrysler Corporation, 1932, there is a tension between the scale of the diminutive worker dwarfed by the gigantic factory.

The third gallery of American Modern focuses on the subject of the changing New York City skyline and it is here that Abbott really shines. She was acutely attuned to the city’s urban landscape, going all the way back to her 1929 scrapbook contact prints. Seven years later, Abbot creates abstract forms out of the slivers of sky in between towering skyscrapers in Canyon, Broadway and Exchange Place, 1936.

As his career progressed, Evans’ vision simplified to a no frills, just-the-facts approach. When Evans presents the Chrysler Building under construction the emphasis is on its graphic solid, blocky regularity. In contrast, Bourke-White presents the same building upon completion in her signature glossy style. 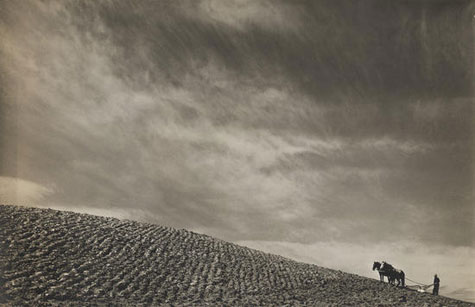 Beginning in 1933, New Deal arts patronage projects, like the Farm Security Administration, provided funding for documentary photography projects which in turn helped to fuel change in America. Abbott and Evans were both on the receiving end of government support; Abbott was able to pursue her dream project of documenting New York City through the Federal Art Project. Evans traveled throughout the South for the Resettlement Administration.  It is during this same period that Evans made his now iconic Alabama Tenant Farmer Wife (Allie Mae Burroughs), 1936 while on assignment there for Fortune Magazine.

The final gallery of the exhibition clearly illustrates how differently these three photographers interpreted the same territory. Bourke-White’s stylized portraits of the South, made while traveling with playwright Erskine Caldwell, are in stark contrast to Evans’ neutral, straightforward point of view portraits from the same year. Both forays resulted in very popular, now classic, books, Bourke-White’s You Have Seen Their Faces and Evans and James Agee‘s Let Us Now Praise Famous Men.

Even though the Amon Carter has one of the largest and most important photography collections in the country, only four of the 120 prints in this show are from their collection. Almost all of the prints in the exhibition are vintage. Especially illuminating are several table cases of books and publications from the 1930s, including Hart Crane‘s short-lived The Bridge, Lincoln Kirstein‘s Hound and Horn, as well as the first issue of Fortune Magazine, on loan from Stanley Marcus‘ personal collection, and the first issue of Life Magazine with Bourke-White’s photograph of Fort Peck Dam on the cover.

This engaging exhibition assembled by Jessica May, Terri Weisman and Sharon Corwin makes clear that the photography of Abbott, Evans and Bourke-White goes beyond social documentary. They were artists as much as they were documentarians, each with their own style and approach, who moved the concept of American documentary photography forward and firmly into the twentieth century.

Christina Patoski is a journalist and photographer who lives in Fort Worth.  A former NPR reporter, she has been published in Newsweek Magazine, The New York Times, Life Magazine, and USA Today.  Her photographs have been exhibited in museums and galleries throughout the United States, including the Smithsonian’s Museum of American History.  She received a National Endowment for the Arts fellowship grant for her video and performance art which was shown at the Whitney Museum of American Art,the Walker Art Center and the SanFranciscoMuseum of Modern Art.

Why don’t you write about the big fucking hole in front of the Kimbell and the loss of something better to ‘us’ than any museum exhibition?
Engaging minds want to know.

It’s because there isn’t a single living soul out there who can justify the theft and destruction of a park and existing museum space that catered to the needs of the very people who actually live their lives here.
I hope your great big brains come back to bite you someplace that’s special… and that it hurts a very long time.