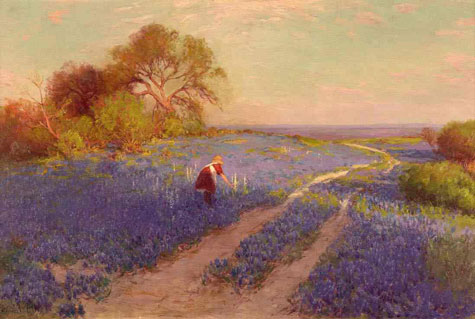 Few things are more universally maligned by artists than a canvas full of bluebonnets. I admit I have been guilty of disparaging the shameless embrace of bluebonnet landscape paintings, prominently hung with pride on the living room wall of just about every bubba this side of Fredonia. I shudder to think about how many dime-a-dozen factory reproduced bluebonnet paintings are out there and, shudder, shudder, shudder, the sentimental reverence paid to them.

What drives the mania for these “blue vomit” paintings?  It probably goes back to 1901 when the bluebonnet was officially named the Texas state flower. In no time at all, the bluebonnet genre reached the heights of hyperbole and became a pop industry icon with legs long enough to sustain it as a profitable art form for more than a century.

If there’s someone to blame for all this, it’s got to be Julian Onderdonk, the San Antonio plein air painter who started painting bluebonnets around 1910. He’s often referred to as the Father of Bluebonnet Paintings, a moniker he despised because bluebonnets were hardly the only subject he painted. Even though his bluebonnet paintings inspired a long line of imitations, Onderdonk was by no means a schlockmeister. He is recognized as one of the earliest and best landscape painters in Texas. Today, his paintings sell for $500,000 and up.

When I recently visited the Ogden Museum of Southern Art in New Orleans, I wandered into a small Onderdonk exhibition, on view there through January 2. I put aside my longstanding disdain for bluebonnet paintings and decided to give it a whirl. I’m glad I did.

There are plenty of things to look at in the Ogden exhibition besides bluebonnets. The first gallery features drawings and paintings by Julian Onderdonk’s father, Robert, a classically-trained East Coast realist painter who studied with William Merritt Chase, one of the most advanced teachers of late 19th century America. After helping to found the Art Students League in New York, Robert traveled to Texas in 1879 to find work as a portraitist, finally settling in San Antonio where he ended up raising his family.

It’s hard to fully appreciate Julian Onderdonk without putting his work into an historical context.  Julian decided at an early age to be an artist and his father became his first teacher.  When Julian turned eighteen, he followed in his father’s footsteps and left Texas to study painting in New York at the Art Students League and then with William Merritt Chase at his Shinnecock School of Art on Long Island where he learned the basics of American Impressionism.

The earliest painting of Julian’s in the Ogden show is “Still Life”, a tabletop of fruit and objects painted in an Old Master style that demonstrates his considerable technical prowess and the influence of his father.

After eight years on the East Coast, Julian returned to Texas and began making a name for himself by painting the South Texas landscape, capturing the land, the rivers and the regional plants throughout the four seasons. His impressionist style was considered avant-garde for the time, especially in Texas.

Julian’s love of nature is at the forefront of all of his work. Two standouts in the Ogden show depict spreads of prickly pear cactus in their full bloom glory. “A Summer Afternoon, Southwest of San Antonio, Texas” shows a winding, narrow caliche country road framed by old oak trees. “Early Spring, SW Texas”, includes another stand of prickly pear, this time in muted tans, grays and moss greens. Big, billowy clouds fill more than half of the canvas “In the Hills of the Spanish Oaks”, and the remainder is shimmering splotches of rust to red of autumnal oaks in Texas Hill Country.

You’ve probably seen the rolling indigo landscape from “Bluebonnet Scene With Girl” a million times, but when you’re faced with the real deal, it’s easy to understand why Onderdonk has spawned so many imitators. No question about it, Onderdonk had a gift for observation and the skills to elevate those observations to a poetic art form. You won’t ever find me snickering at an Onderdonk bluebonnet painting.

Throughout his career, Onderdonk worked to capture a very specific landscape, as well as the specific time of day, the season, the weather, the moment. Consider the names of some of his other paintings: “Bluffs on the Guadalupe River, 17 Miles Above Kerrville, Texas”, “Mountain Pinks in Bloom, Medina Lake, Southwest Texas”, “Redbud Tree in Bloom at Leon Springs, San Antonio”, “Rainy Day in Bandera”.

Onderdonk painted in Texas for a little more than ten years before he died unexpectedly at age 40. Who knows what he would have achieved if he had had more time to continue his quest.  Even though his name will forever be linked to bluebonnets, Julian Onderdonk’s legacy is a lot more than that. He was a naturalist and an astute observer of nature whose knowledge and celebration of the Texas landscape endure on his canvases. 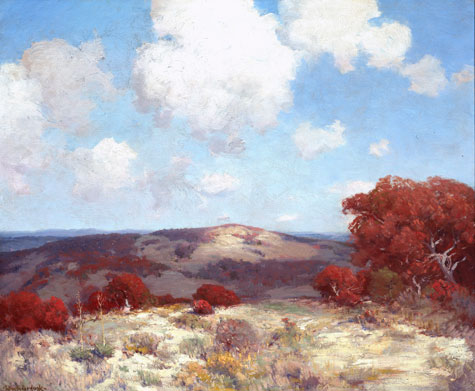 In the Hills of the Spanish Oaks, c. 1917 by Julian Onderdonk

While I do not have absolute numbers or even a sample survey, I suspect that there are sound reasons to suggest that bluebonnet paintings are not universally maligned by artists. Frankly, most of the vast universe of artists have no idea what a bluebonnet is. And while Mr. Onderdonk’s paintings might sell for $500,000 and up, this inflationary hyperbole does not reflect an accurate range of values. A little checking might have provided some worthwhile information to the reader. A quick glance at recent auction records for Julian Onderdonk sales at Heritage Auctions in Dallas (Onderdonk does not often command high prices outside of Texas) shows that from October 2005 through November 2010, 36 paintings sold at auction and ranged from $5,975 to $131,450. The average was $30,052. Three paintings sold for more than $100,000 and one of those was indeed a bluebonnet painting ($107,550 in 2010). Obviously, these â€œrealâ€ values do not approach the $500,000 plus prices noted in the article. I can imagine that somewhere, some gallery has a $500,000 sticker price on what they consider the paradigm of Onderdonk’s bluebonnets. And maybe someone will actually pay that. But some “reality check” may have been of more relevance; the tendency to bolster an artistâ€™s reputation with appeals to high prices does not really do anyone much good, especially when it misrepresents the market. It is more accurate to say that Onderdonk’s paintings sell for $5,975 and up. My guess is that you might find one for less and maybe in moderately good condition.