“Matthew Ronay: Between The Worlds” at Artpace 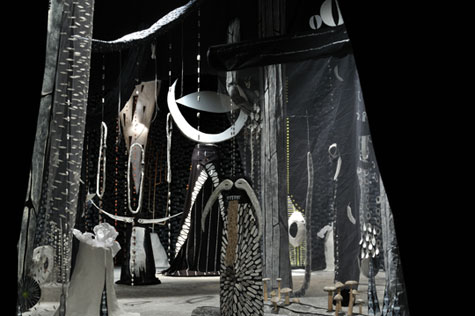 Matthew Ronay’s Between The Worlds, at the Hudson (Show)Room, Artpace, appears alternately rooted and nomadic. Yurt, grotto, hall of mirrors, night wood, it beckons a walk through corridors darkened by low light and black curtains. An opening reveals a total world, a forest to get lost in. The curtains, which serve as the walls of the enclosure, are speckled on the inside with energetic white dashes that give an entoptic effect, while the ceiling of the gallery is concealed with loosely gathered billows of black cloth that festoon with weight and volume. The floor, covered with spattered drop cloths, completes the illusion of a space complete unto itself.

Between The Worlds is a call to dreamtime, but that is not the only between to be found in it. Opening night was not really about stem clutching and chitchat. Even that night, it felt like a place to be quiet and still. But now, many days later and empty of visitors, the drone of the air conditioner, accented with moans and clanks from the video projection in an adjacent space, combined with other random building sounds—closing doors, footsteps, etc., creates the sense of a pleasing solitude that feels portable like it can be kept on the walk back into that other world —the one filled with so many more sounds, so much more randomness. It suggests a way into an inner scenario and is more infiltration than exhibition—the increasingly corporate nuances of the art world falter in hazy dissolve. 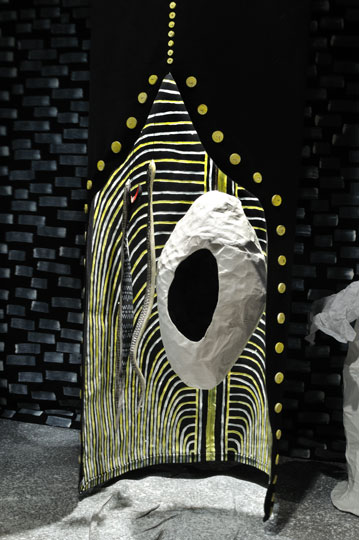 The work—it’s really more like play—can be related to the sort of 40s Jungian primitivism that rose in Jackson Pollock, but the specific antecedents don’t matter as much as the ambience. It is more an offering of the moment than a foil for reference and tradition.

An out-of-the-way bowl, situated on the margin, balances on a copper tube. A tiny red turret-like object occupies the bowl’s center amidst crimson spatters, suggesting a sacrificial rite. The diminutive size of the bowl and its casual location signal a happenstance opportunity for individual transformation, rather than group ritual. 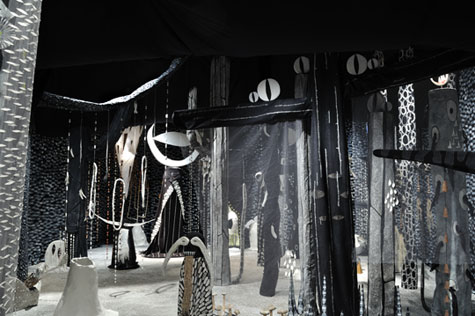 A strange, vertical tube channels light that beams straight down, illuminating a primordial birth tableau that hangs suspended within it. The tube opens like a gown or miniature grand drape to reveal the primal scene—dangling snakes, womb—and is dotted up the center of its length with a vertical line of yellow buttons that also follow the edges of the opening. Oddly, there is a ruffle about eight feet from the floor that seems a creepy anomaly smirking from above with a feeling of benign threat like a Killer Klown collar, but this slightly paranoid tone is tempered with shroomy humor giving way easily to the calm, expansive state that is mostly the way in these woods. The column reads as an umbilical terminating in a tiny theatre, but also comes off as some kind of Olive Oyl-looking outfit providing a bit of non-sequitur relief. The line of buttons carries on above the ruffle implying an absurd continuum. It is tempting to say that this is the only pop reference in the show, but the entire work can be seen as a cartoon without diminishing its power.

Between The Worlds is a fantasy, but accessible as a prop that can send one beyond, to a sense of having observed something in stasis. A moment suspended that feels like stillness growing. Or quietness humming. The sensation may take root in imagination, spreading a bodily feeling of being low to the forest floor, listening. But the stillness is part illusion too—the forest walls breathe with the moving air from the AC and from any passerby who walks by outside the curtain. 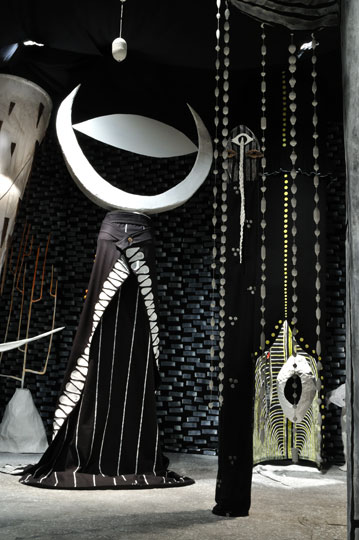 Ronay’s previous work—multicolored, acerbic, in other words conventionally gallery-friendly, has received a lot of play in recent years and much has been made of the departure this new work represents. As if a change-up is some sort of risky marketing move. As if some Prodigal Son has returned home to find that his absence is what gives him his identity and his value. As if moving toward a connection is somehow less engaging than playing with the toys of a dying empire.

Opening night, the artist inhabited a shamanic tree suit topped with crescent horns framing a blank eye. A blind looky-loo, eliminating the usual spectator/artist relationship—the viewer gazing upon a faceless guise; the voyeur with no eyes. He occupied this costume for three hours, probably bored, thirsty, itchy, hot, or otherwise uncomfortable. Intrigued at times too, I’m sure. Couldn’t see, couldn’t be seen, moving slightly now and again. Vulnerable, inspiring curiosity, requiring trust. People whispered to him. Touched him. He hovered on the edge of the incoming, unseen persons—at what range, twenty feet to two inches, do they become known to the tree that hopes to be part of the forest?

Lubbock native Hills Snyder lives in San Antonio. He is an artist,
curator, song writer and Director of Sala Diaz. You are invited to
follow his writing on the Facebook page U.S. 87.