by Theresa Bembnister December 15, 2010
FacebookTwitterEmail
Marfa is full of curious things, and the Ayn Foundation is one of the most curious.
The windows of the two storefronts of the old Brite Building downtown are covered with white screens. There’s a number of unused buildings with covered-up windows around town, so it’s easy to drive or ride a bike by the Brite Building without giving it a second glance. But on foot you can see phrases — “Ayn Foundation,” “Das Maximus,” “Andy Warhol: The Last Supper,” “Maria Zerres: September Eleven” — painted in black letters on the white wall.
What is the Ayn Foundation? What’s going on behind these white screens? And what does it have to do with Andy Warhol and September 11? 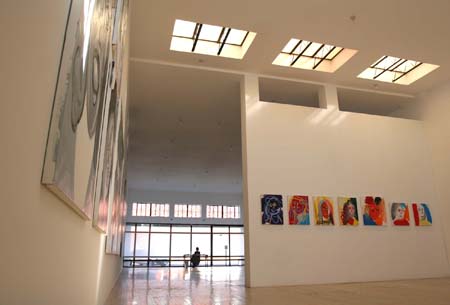 The south gallery in the Brite building contains a series of paintings that German artist Maria Zerres made in response to the September 11 terrorist attacks. Zerres kept an apartment in New York at the time, but she was away that day. Upon her return to the city, she began the series of works based on her feelings about the attack, using a restricted palette of black, white, red, yellow and blue.
The first half of the tall, vertically oriented canvases on display depict life in New York before the attack: a mother and her children walk down a street, a musician plays the guitar in a park, and boats move down the Hudson River. The painting “Silence” depicts the World Trade Center the moment before the attack, and the remaining paintings in the series show the aftermath. 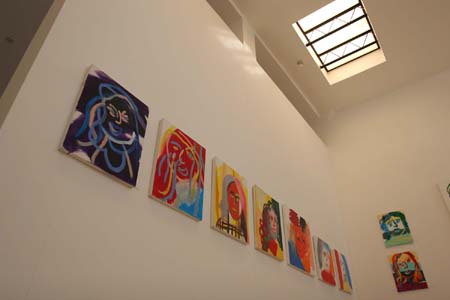 The gallery on the north side of the building contains three paintings from a series Andy Warhol created, based on Leonardo Da Vinci’s “Last Supper,” in the mid-1980s. The first thing you see as you walk through the door is a giant painting of Jesus at the Last Supper, outlined in dripping black strokes of paint and filled in with flatly painted areas of red, blue, peach and brown.
On the south side of the gallery hangs a canvas that re-creates the outlines of Leonardo’s mural in its entirety, and on the opposite wall is a painting with a bisected composition. One half pictures Jesus; the other shows a shirtless man from the chest up and features the slogan “Be a Somebody with a Body.” 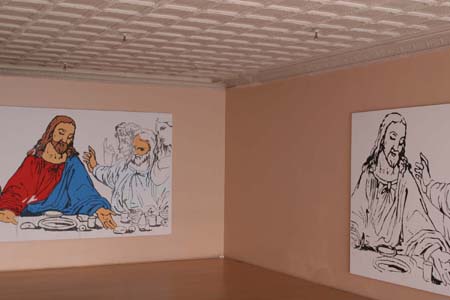 Gretchen Coles, the director of the Ayn Foundation’s space in Marfa, agreed to answer my questions about the installations, but her answers seemed to lead to more questions.
The name of the foundation, it turns out, is a word made up by the founder, Heiner Friedrich. He hasn’t told anyone what it means, Coles said. The foundation does have a mission statement, but that, too, remains a secret.
When I asked what significance this particular work had to Marfa, Coles said the selections on display here were made at the last minute. “It doesn’t have a relationship to Marfa,” she said. But she did tell me that the Ayn Foundation aims to bring a stronger painting presence to Marfa.
Friedrich is a German art dealer who co-founded the Dia Foundation, which helped Donald Judd finance, in its earliest stages, the museum that was to become the Chinati Foundation.
The Ayn Foundation’s Marfa project seems to carry on the spirit of the Friedrich-guided Dia, but on a smaller scale. In the 1970s and ’80s Dia purchased buildings and property that were adapted for single-artist museums with long-term installations, such as Fred Sandback’s (now defunct) space in a former bank in Winchendon, Massachusetts, or Walter De Maria’s “The New York Earth Room” in SoHo (which is still on display). 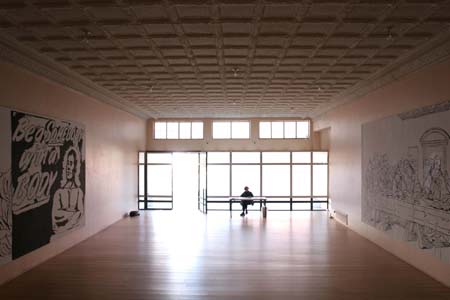 The Brite Building spaces were adjusted specifically for the work installed inside, and the foundation considers them to be long-term, semi-permanent installations. The space opened in October 2005 with a five-year lease, and the contract has recently been renewed for another five years.
If you find yourself walking down Highland Avenue in Marfa sometime before 2015, stop inside the Ayn Foundation and take a look. It’s open noon to 5 p.m. Friday and Saturday during December, January and February.