One Kind Favor 6 (Maybe this’ll be the day)

Next morning in Marfa I mail a sixth postcard to Jens Hoffmann. A funny ratio you might say to the two postcards he kept, especially considering that I also sent him the Texas Lady VHS tape and a photograph of Will Rogers & Soapsuds in Lubbock, but his postcards were vintage, half a century old. Dr. Pepper aged is still sweet, just as a rose is read by its petals, as the saying goes among bicyclists.

Today is my eighth day on the road. You may recall that one of the items Hoffmann kept was a shot glass from a bar in Presidio, so that’s where I’m headed with a replacement that I picked up back in Adrian. I’ll have a shot at the bar and then leave the glass there. The postcard I mailed today came from Adrian too. There is a bust of Will Rogers on the front with this inscription:

Live your life so that whenever you lose, you are ahead.

Pretty much what I was thinking when the stop sign got stolen. Serves quite well as a general mantra for the entire project too. And in a broader sense has been lurking the whole time — what I’m thinking of most is how this process has compacted time and keeps saying, softly and clearly, that every moment counts. Even when you’re off the road you’re on it.

Over coffee I hear a couple tell the cashier that they are biking from Marfa to Presidio. I’m headed that way too, I tell them. After awhile I get on the road, finding it empty but eventful. I pass the shadow of a helicopter following 67 South, check out The Profile of Lincoln and Elephant Rock, and come upon the bicyclists at mile thirty four. 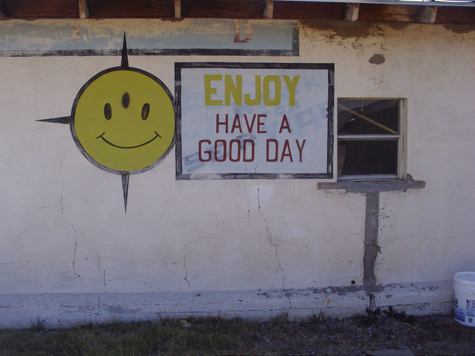 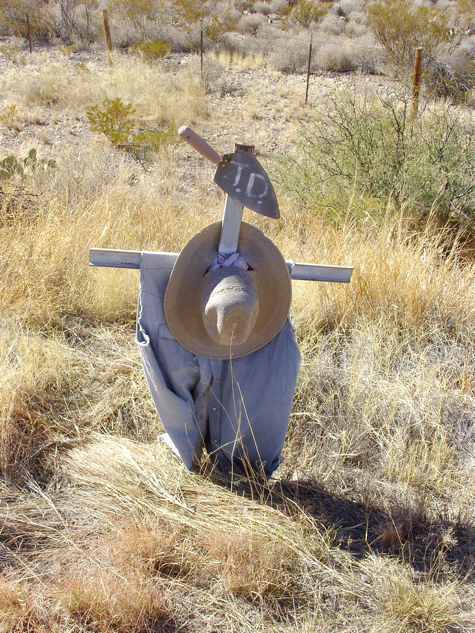 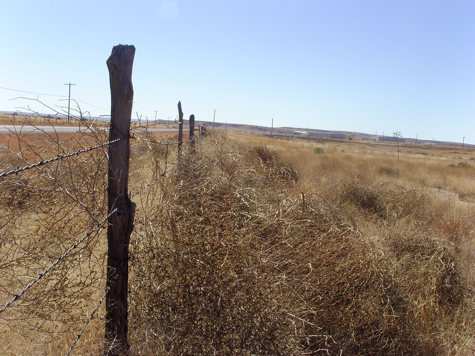 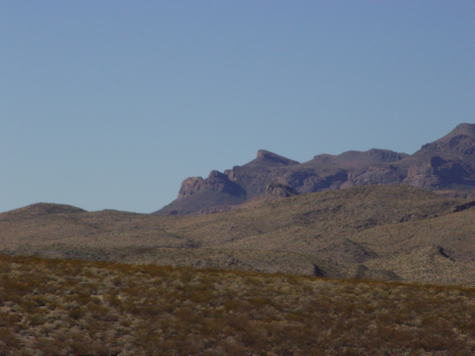 When I get to town I drive around for a while looking for bars. Eventually I stop at a motel and go in to ask where one is, figuring that I might be able to guess which one the shot glass came from. Inside there are two guys checking in. I hang while they do their stuff, then ask the first one finished if he knows where a bar is. He says he doesn’t know and the other one starts laughing. Says something about senoritas and beers. Evidently the first guy was bragging to the receptionist at the motel, but then she heard him telling me he didn’t know of any bars. Blew his credibility. Guy number two is still laughing and laughs even more when he hears me tell the first guy that I bet he didn’t know a stranger was going to walk in the door and put a hole in his story.

So I tell the receptionist that I’m supposed to meet a friend at a bar in Presidio but I don’t know which one, can she name them for me. Outside, after the receptionist has told me there are no bars in Presidio, the guys are unloading gear and I say I guess my story has a hole in it too. More laughing.

I ask the question again at a store on the corner and get the same answer. Then consider the possibility that the glass came from one of the two restaurants in town, but decide to drive on, figuring the whole deal is starting to sound a little shadowy. Kind of like Big Spring and its double.

Right outside town I meet the bicyclists heading in, and five miles further out, I see the Palomino Bar. Closed. 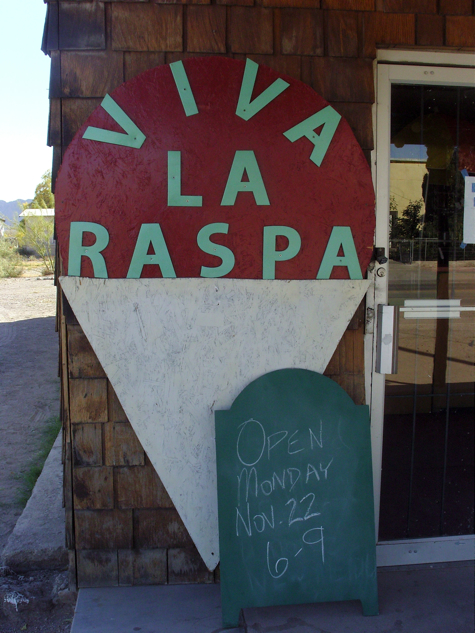 Maybe I should've hung around Presidio for a tequila raspa 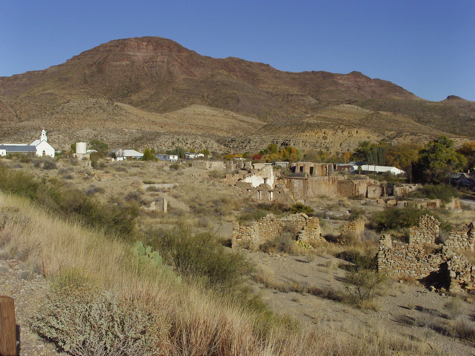 Shafter, Texas, on the way back to Marfa 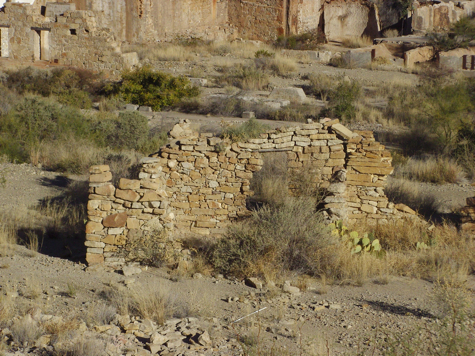 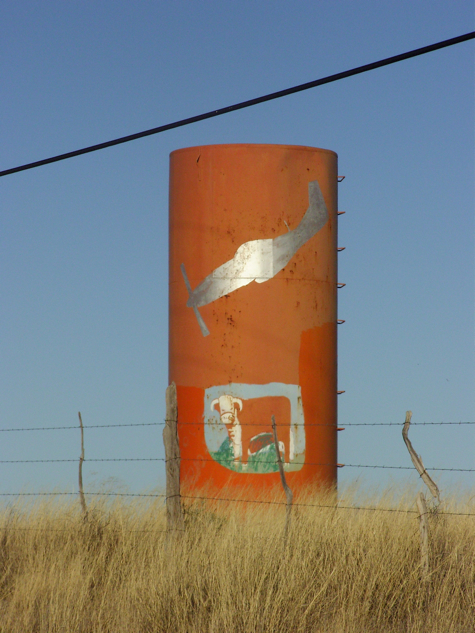 
Back in Marfa I get a bottle of tequila. I’m going to meet Doc Cactus later on at Marfa Table. He’s an Osteopath that works at clinics in Marfa and Sanderson during the week, and on Monday nights he’s the host of the West Texas Blue Monday show on Marfa Public Radio. He’d been reading the story and contacted me a few days prior to drop by.

Marfa Table is a good place to hang out, right next door to the KRTS broadcast booth. We have some drinks. The Doc allows that he’s never seen The Palomino open. He tells me about growing up in Lufkin and a few stories about his life in West Texas, mentioning a friend of his, Mark Pollock, who has a guitar shop in Alpine. I’ll come upon his shop next day and just stop long enough to say hi and take some photos. Hit it, git it and split, says Mr. Pollock. But before I take off he’s got a story about playing in the James Cotton Blues Band and finding a H.U.D. eviction notice in the back of an amp belonging to famed Chicago bluesman Otis Rush. Next time you’re out this way drop in and ask him about it.

I drive around Alpine looking for people staring into dark places, hoping to offer them the flashlight. Or anyone in a Boy Scout uniform will also work. But as fate would have it, my overlay was undermined when I see the perfect kid to give it to. He looks like he might like it. He’s with his Dad and a friend. They’re from San Antonio.

Wait a minute. It’s still yesterday. You know, when I was talking with Doc Cactus.

Anyway, we have a couple more shots and off goes the Doc with the Route 66 shot glass I got at The Midpoint Cafe. 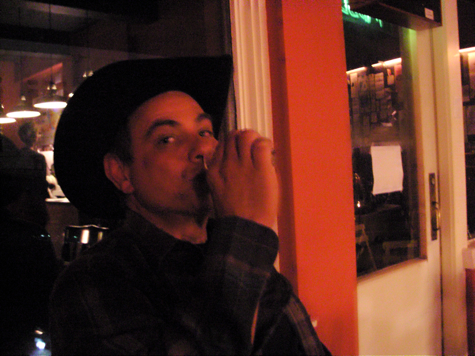 Tomorrow, when I’m for the third time on this trip very near the border, I’ll release the wildflowers. 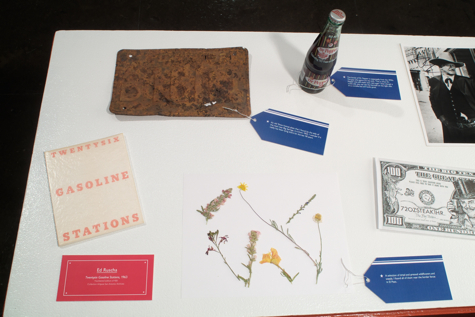 Tuesday, waking up in Marfa for the second time. The only time on the trip I’ve stayed in same place twice. Today I’m out the door towards home. I drop by the Ballroom Marfa and leave the rodeo photo. As if in answer to the That’ll Be The Day photo, I’ve written across it Or maybe this’ll be the day. 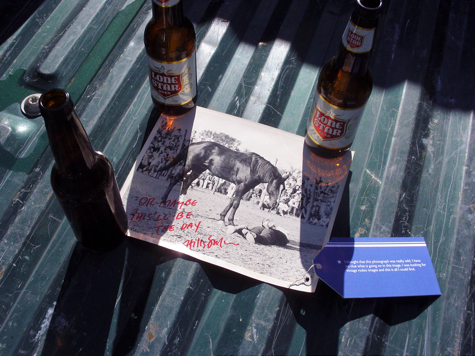 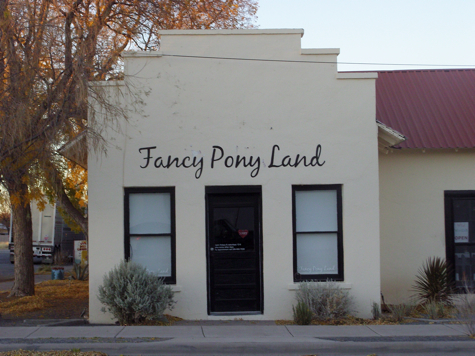 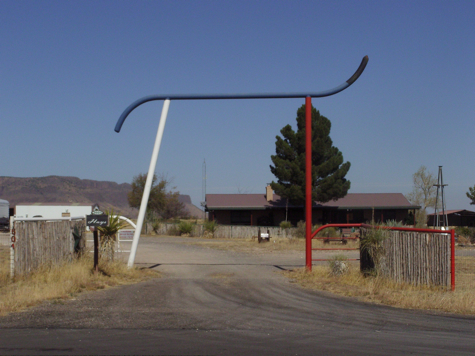 The ratio of a circle's area to the square of its radius, that's what I'm talkin' about

In Alpine I complete the flash-forward that jumped in here a few sentences back and give the flashlight away, then get some breakfast before the long drive to San Antonio. In the café there is a fellow doing origami at the next table. 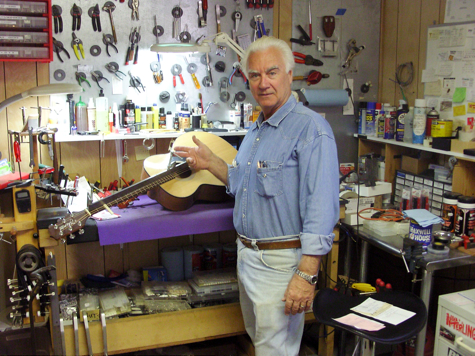 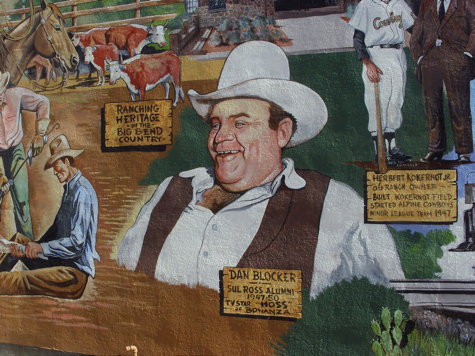 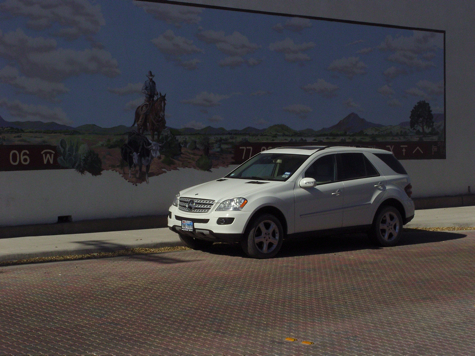 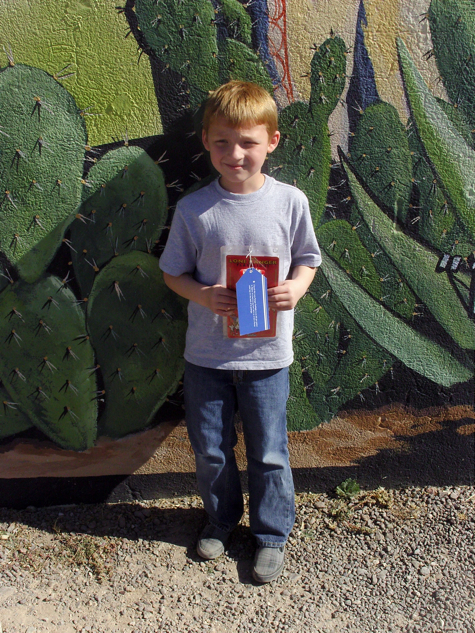 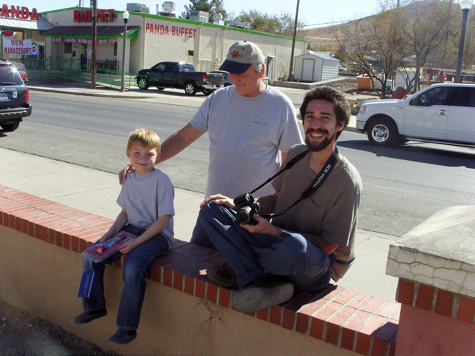 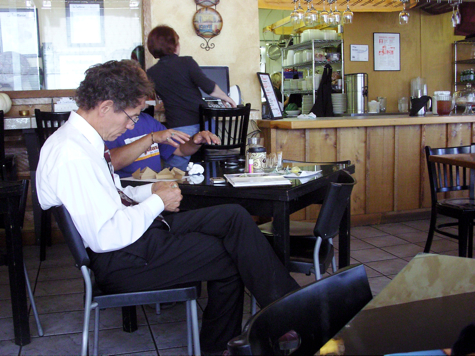 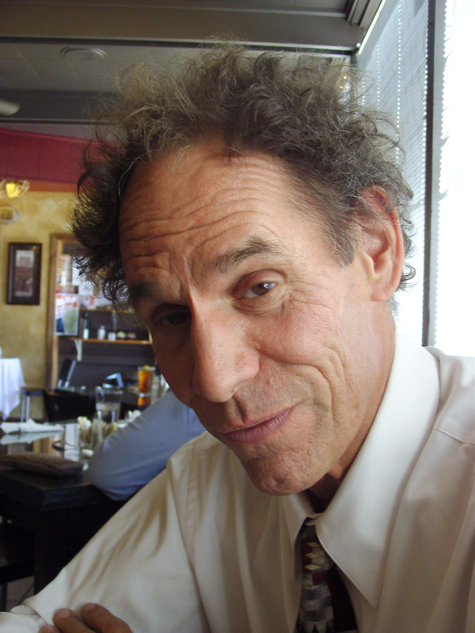 The border or the sense of it is pretty much ever present along 90, at least until you clear Uvalde. But before that point comes I stop at the Jersey Lilly in Langtry. This is the saloon where Judge Roy Bean held court. I ask the receptionist at the visitor center if she’s heard the one about the wild goose that goes into a bar in Presidio. No, she hasn’t. Are there really any bars there, she asks? We exchange a few more road trip pleasantries, then I check out the bathroom to see if it has a good urinal for a photo op.

Not long after that I reach the Pecos River Gorge. The highway over the Pecos is less than a mile from the Rio Grande. From the bridge you can see the mouth where it pours into the big river. It is here that I release the dried flowers that Hoffmann gathered near the border fence in El Paso. The wind takes them. 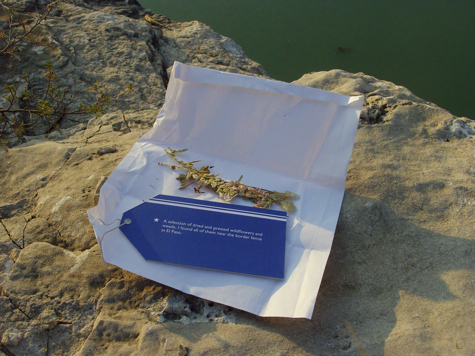 On a cliff overlooking the Pecos River

The wind takes them

Thirty miles later I pull into Comstock looking for a post office, but I need an address. Luckily someone in town has an unlocked network that allows me to get on and find what I need. Then I find another kind soul who gives me an envelope. I drop the blue tag that was with the flowers into an envelope and mail it to the governor of Arizona. 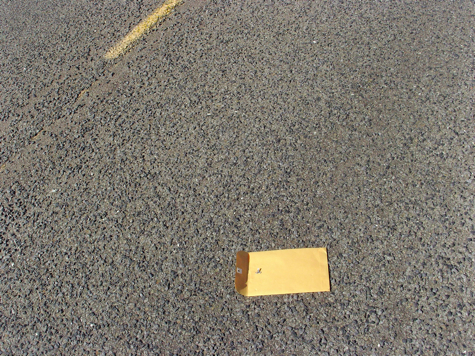 At dusk I pass three guys changing a flat on a mini van. It’s a little hard to see, but I swear one of them is wearing a Boy Scout uniform. A few hours later, it’s dark when I pull into San Antonio. The next day I make a certificate of authenticity, complete with photos featuring the beer can. I take it over to Mike Casey for an official notarization and then drop by the San Antonio Museum of Art, which was once the Lone Star brewery where the can was originally filled with beer probably around fifty or so years ago. 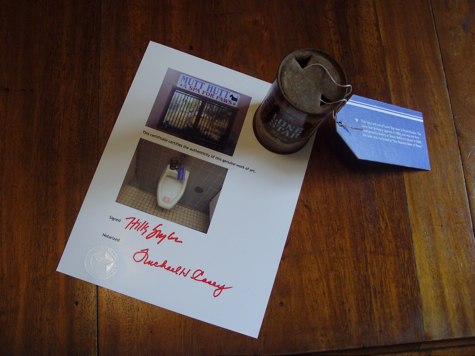 Certifying a genuine work of art 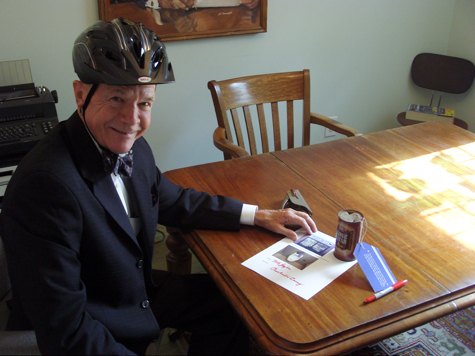 Once at the museum I give the can with tag and the notarized certificate to Curator David Rubin who has me meet with Assistant Registrar Leona Skull-Hons for documentation of the gift. 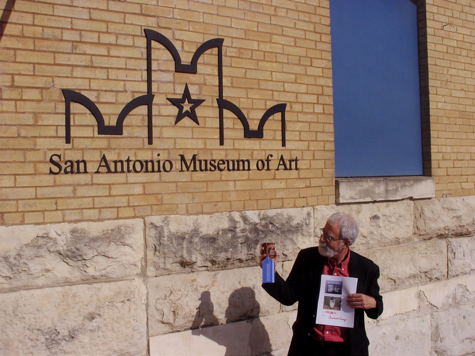 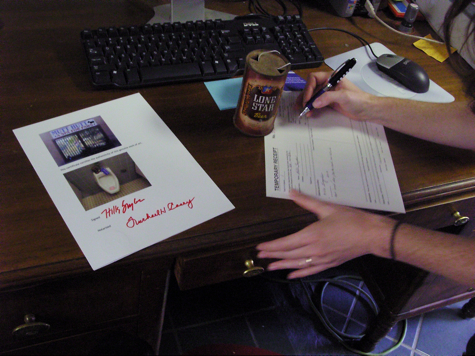 Signing in the possibility

By January, the scheduled time for the next Collection Committee meeting, we’ll know if the can gets to stay.

But I’ll still be on the road.