One Kind Favor 5 (Chuck is my co-pilot)

I can sense the Hermes assist as I cross into New Mexico. Out here they call him Coyote. He’s a kind of fellow traveler for me and has provided joy, insight and a lingering sense of loss as I drive these days. It’s Friday afternoon after the nearly tearful tumbleweed release — evidently I loaded the little weed with far reaching associations.

I spend some time struggling with finding the road around Montoya, but hit a good section of Route 66 between San Jon and Tucumcari, where I pull in to crash for the night and write. Next morning, before I pull out, I mail the menu written over with the letter re Fast Food Nation. 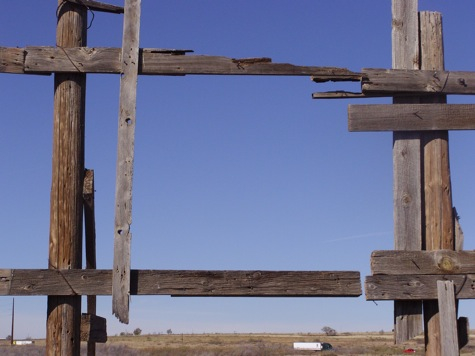 Maybe another way to picture the wind 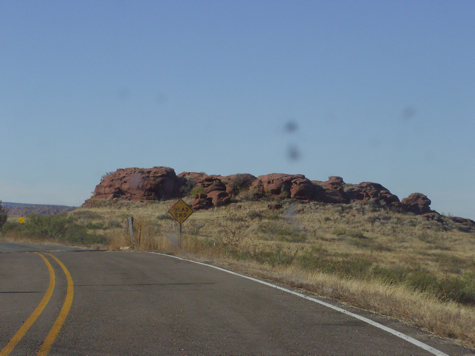 These rocks near Montoya gave me a lucky feeling

Tucumcari is a town full of neon, past and present. Some of the signs are current and functional — just turned off. Hard times. I can remember coming through at night when I was a kid. The place looked like Las Vegas in the dark, but that was an era when the roadside energy one could discover was well lit. The defunct signs still standing continue to read as indicators nonetheless, variable references to one moment or another, all passed over now by the march of generic America. 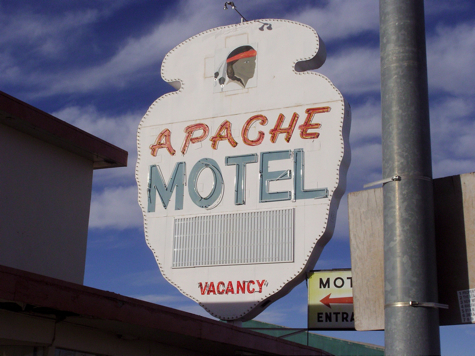 Saturday morning I’m down the road to Alamogordo. These are some lonesome roads out here, hence my previous speculation about the cream cakes. Later on I begin to get close to mountains and feel some real joy when I recognize Nogal Peak from a distance. I was on top of it once in the seventies. Every rock, every leaf, every stick, was completely covered with lady bugs. They were lined up on every long stem of grass like little freight trains. The entire summit was covered with thousands of them. 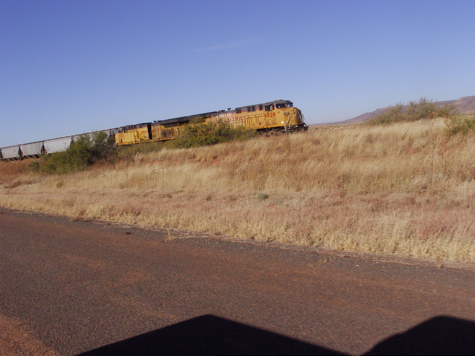 An over the shoulder train shot 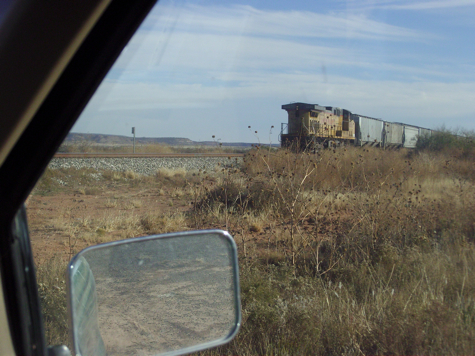 Waited for the train at the next crossing 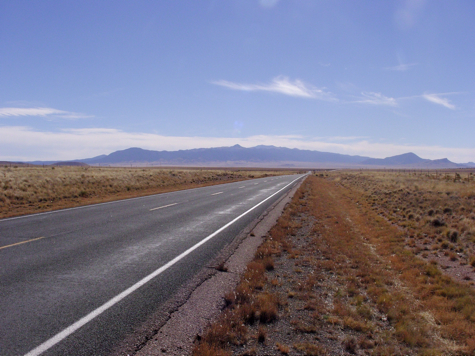 The point in the center is Nogal Peak 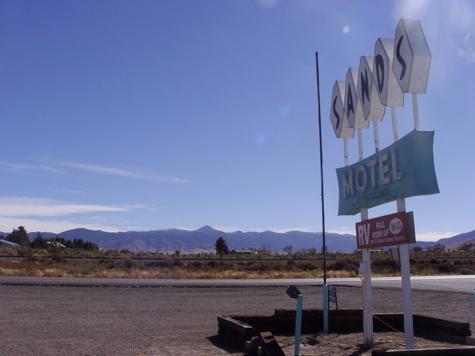 Nogal Peak as seen from Carrizozo

Soon I come upon Three Rivers, west of the White Mountain Wilderness. When I was twenty I brought several nine to sixteen year old kids out here to hike and camp. It was my second attempt to find a system of springs and trails connecting Sierra Blanca (elevation 11,093) to Nogal Peak (elevation 9,957). I had first tried it three years previous and wound up drinking water off of leaves. I wouldn’t finally figure it out until my third attempt. Anyway, when I was up there with the kids I made a classic error and took us off what I once thought of as the backside of the mountain. After one really long day traversing trail-less forests we made it to a good place to camp near water and hiked out to the flats the next day. None of the kids ever knew we were lost. Either that or I never knew they knew. It’s a small range compared to the Sangre de Cristo in Northern New Mexico, and the kids were having a blast, so I was never really worried — it was a good adventure. Anyway, we came out at Three Rivers, which was then a pretty minimal gas station. I hitched the sixty miles back to the other side of the mountain to get the borrowed ’61 Chevy station wagon we were in and picked everybody up before dark. Today, Three Rivers is an extensive Curios shop where you can even get cherry cider. Glad to know the backside of the mountain is doing so well. 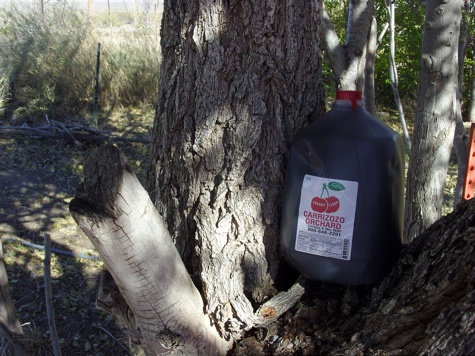 This is the stuff

I get to Alamogordo for another night of writing. This place is so Anywhere, USA. One long strip center, at least as it appears from Highway 54 through town. Next morning I’m out the door toward White Sands National Monument and Las Cruces. I head for the dunes when I get to White Sands. Up in them I open the jars and pour the sand from both of them into a single pile. I’ll let the wind do the rest. Back at the Headquarters I ask a man if I can give him the official brochure of the park (with attached blue tag). He’s willing and cooperative and obviously a little nonplussed, but bemused. 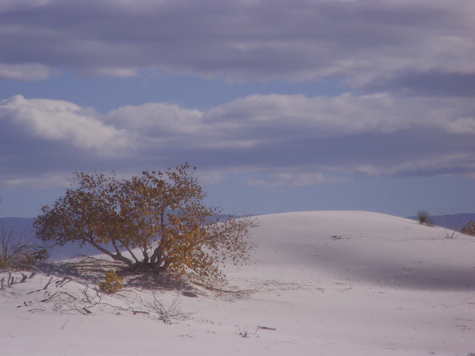 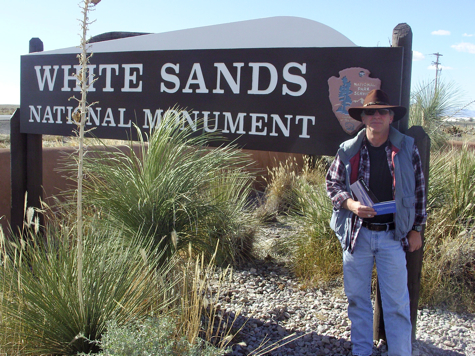 As I near Las Cruces I see The Lovely. They call it Sugar Loaf. In the world, there are a number of mountains called this. Kind of like it is with the Will Rogers statue, the name gets around — us projecting our stuff on everything again. But this is a good one for sure, though I’m not likely to meet one I wouldn’t like. The first time I saw it, it looked like some impossible pastry jutting up out of the roots of the surrounding mountains.

I pause to consider Werner Herzog at Aguirre Springs National Recreation Area, which offers the best access to Sugar Loaf. My thoughts start with Aguirre but then jump to Fitzcarraldo, a movie set in Peru about an opera obsessed European who drags a small ship over a mountain in order to connect his route from one river to another.

The drive off the highway to Aguirre Springs is about eight miles. This is some Yucca rich time here, every one of them gorgeous. Cows would go apeshit eating these blossoms. When I get to the campground I find one of the bear-proof trash cans. In go the cream cakes. Between them being off my hands and the magnificent intrusion of Sugar Loaf, I feel pretty sweet. 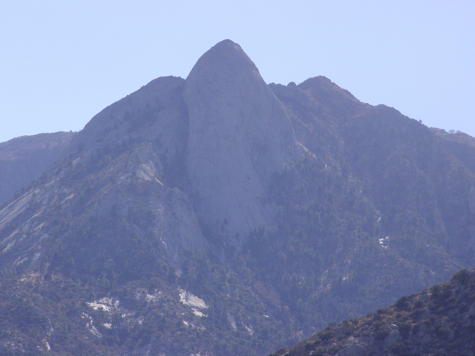 The San Augustin Pass cuts through these mountains to Organ (made it!) just on the other side. One of the peaks is known as the Organ Needle. I didn’t know this until now, but my previous musings about acupuncture appear to have been on the mark. 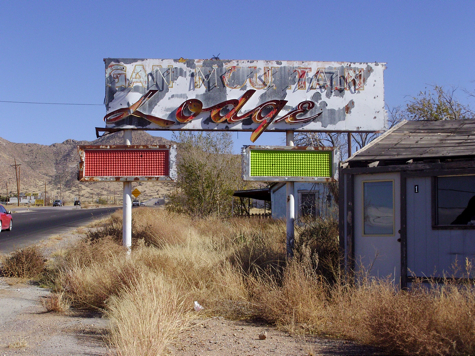 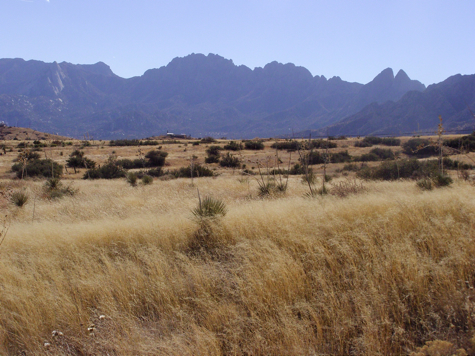 One of these peaks is the Organ Needle 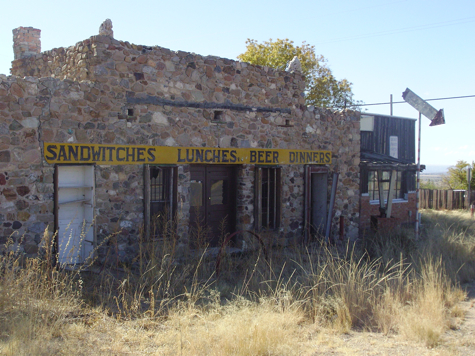 I saw this sign in Organ, but everybody I met in the dunes was pretty nice

When I pull into Las Cruces a couple of hours later I come across a site where I feel the impulse to photograph the Lone Star beer can. Hoffmann got it in Hondo on his trip, so if I’m going to end up returning it to its origins, which has been a guiding principle, I’ve still got a couple of days and lots of miles to discover what will happen with it. 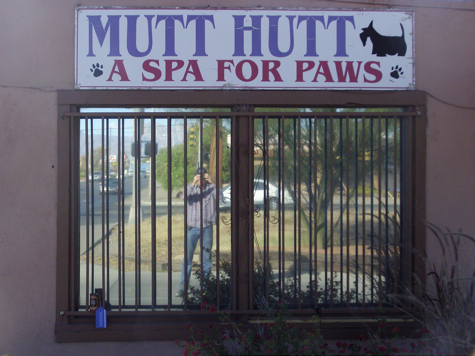 The one artifact that’s been like a feather tickling my ear the whole trip is the rodeo photograph. The one Hoffmann calls odd. It is odd within this group of things in one aspect — most everything else has told me pretty clearly where to leave them or who to give them to.

Night falls, but I drive all the way to Marfa. When I pass through Valentine the darkness is deep and the place seems abandoned except for one light, but it’s OK. I don’t need any shoes and I already have a bag.