Thursday morning Jeff and I head into Lubbock in separate cars. He’ll go east to Dallas for a Texas Artists Today book signing and I’ll go north, but first we roll over to the Buddy Holly Center. I’ve got the autographed
John Wayne photo, which I’ve amended a bit. The image appears to be
from The Shootist, Wayne’s last movie, but the only film of his that
means anything to me is The Searchers, loosely based on the story of
Cynthia Ann Parker. In the film Wayne’s character Ethan Edwards utters
the line that became a Buddy Holly signature. I write That’ll Be The
Day on the photo, autograph it and give it to the women in charge at
the Center, telling them they can do with it as they please. 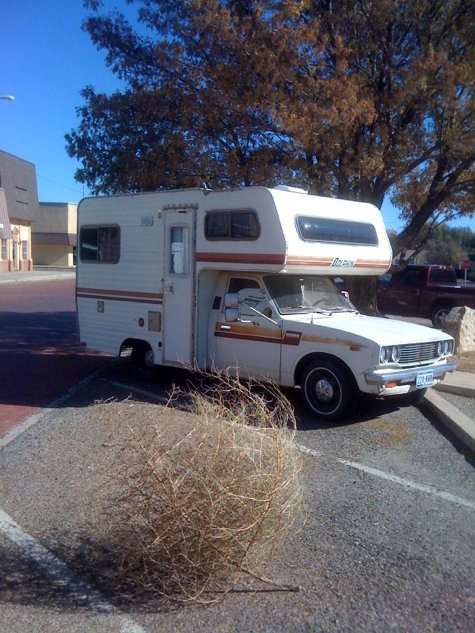 The camper, next morning 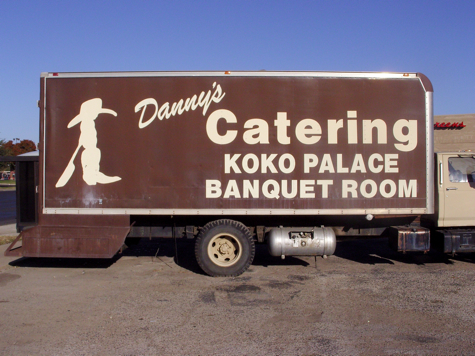 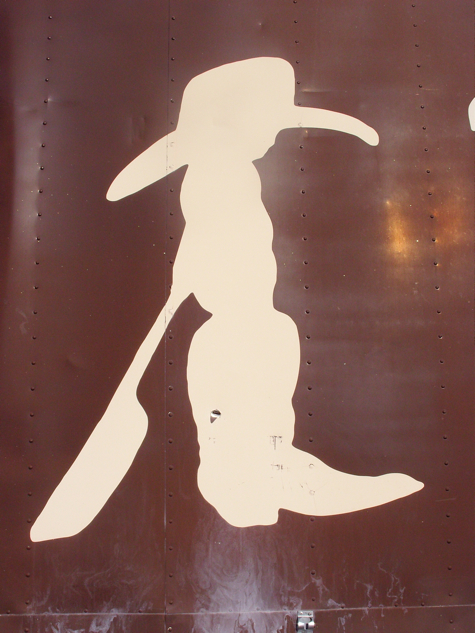 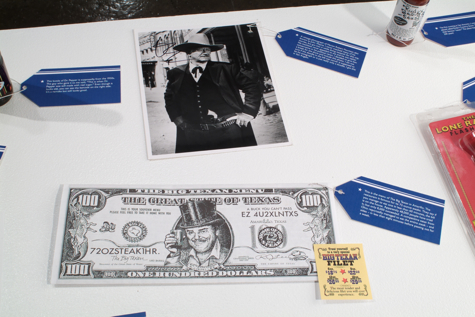 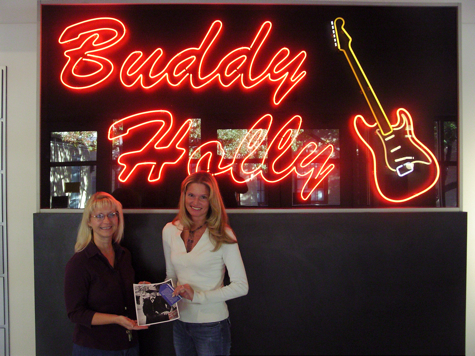 Afterwards we meet at the Tech Café for some breakfast. Pretty uneventful but Jeff draws a picture on a napkin that I want to get a picture of so I fumble in the backpack for the camera. I’m looking down when Jeff says someone’s messing with your truck. Sure enough there is a girl holding the stop sign. I can’t tell if she’s looking at it or what, but I start clicking the camera. We go outside to see what she’s up to, but as we approach she sees us and takes off with the sign. Immediately I yell Stop! Why, I don’t know. Do people stop when you yell that? I try it again, still shooting images. Finally, as a last ditch effort I yell Yield! But she’s gone. 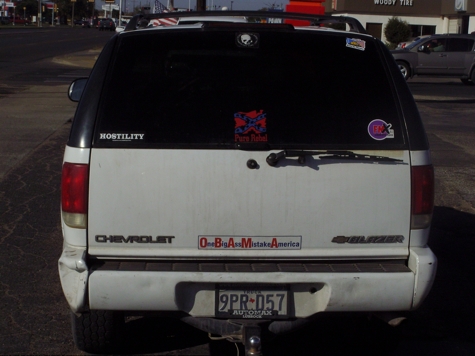 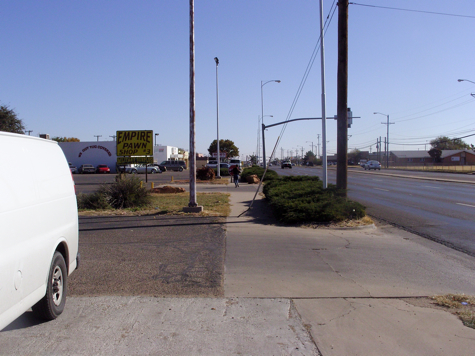 
The Will Rogers statue on the Texas Tech campus is one of many apparently. The same one is somewhere in Ft. Worth as evidenced by one of the missing postcards. Because of this statue, I grew up knowing the name of Will Rogers horse — Soapsuds. On Sunday, wherever I am, I’ll drop a photo of Will Rogers astride Soapsuds in the mail to Jens Hoffmann. 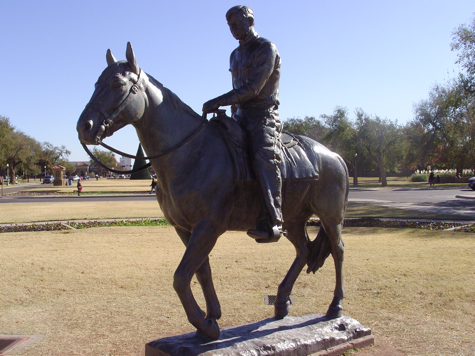 Will Rogers and Soapsuds, Texas Tech

Not far from the statue is the site of what was formerly the Texas Tech
Museum. There used to be a sheepherder’s dugout right outside. Inside
there is an amazing egg tempera mural in the round by Peter Hurd
depicting the history of Lubbock. Each panel is a different important
character in that history. I wonder how big the circular space would
have to be to include the hidden histories. 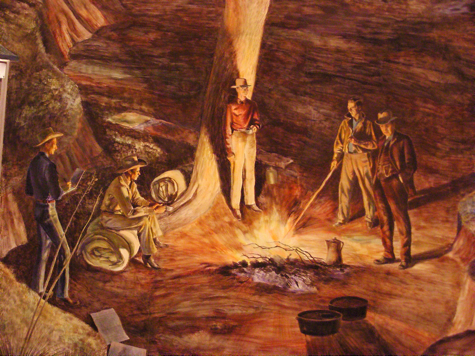 Peter Hurd on the left 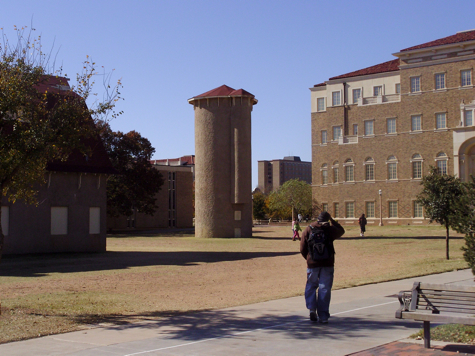 Silo on the Texas Tech campus 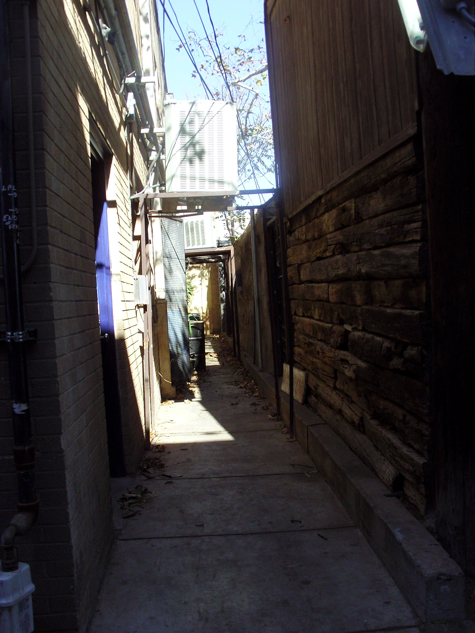 This passge led to good music in the late sixties


Sometime in the early seventies I think, a Pioneer Family statue was erected in downtown Lubbock. I recall that there was some controversy because the pioneer woman had nipples that were deemed too prominent. So I left the license on the edge of the small retaining wall that surrounds the statue in order to, retrospectively, offer some leeway — just a gesture, not a sanction, which she has already supplied herself. Hopefully Lubbock, in the passing decades, has acquired an increased tolerance or even some affection for nipples, be they pioneer or contemporary. 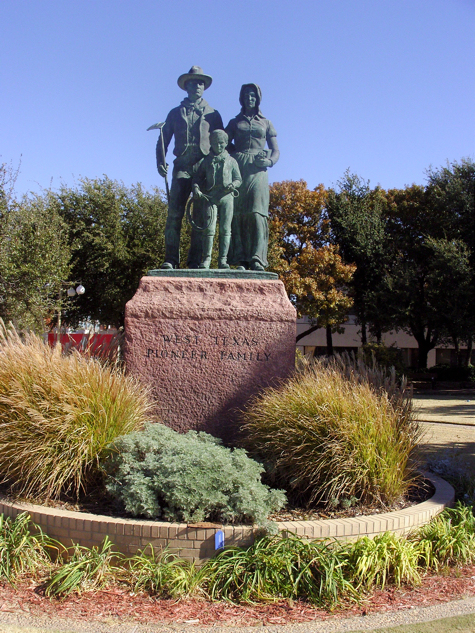 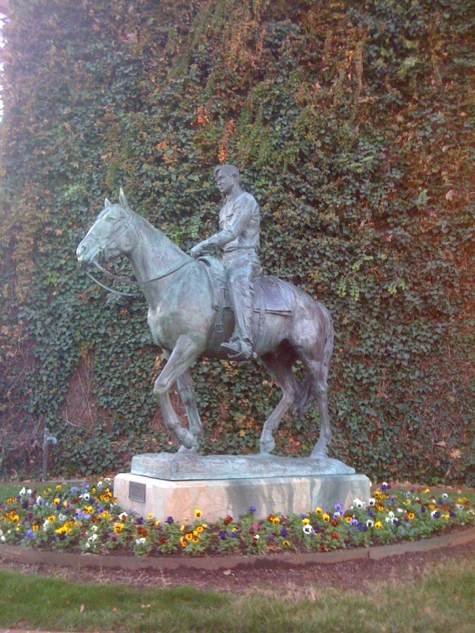 In Dallas, Jeff dropped over to the Anatole Hotel for a drink and found this 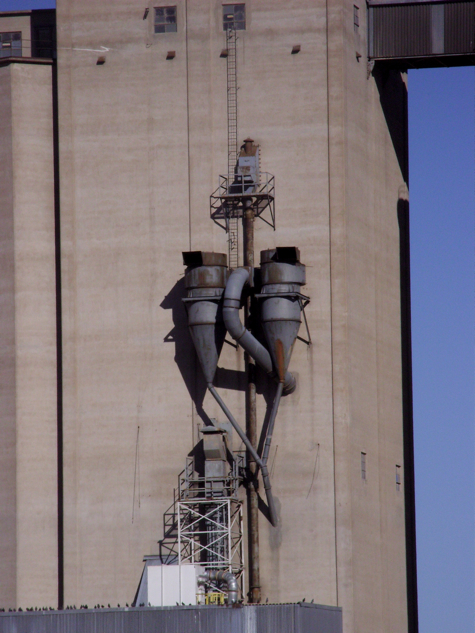 
All this fooling around in Lubbock has got me once again later in the day than I wanted to be. I’m headed to Palo Duro Canyon, just south of Amarillo, outside the town of Canyon. I’d imagined having an afternoon writing in the cabin I’m going to stay in. Instead I get there at near dark and write until one or so. Silence and darkness. I chop some wood to get a fire going and since I don’t have any newspaper I use the Smokey Bear comic, tag and all, as fodder for the kindling. The night passes slowly. It’s good. The fire is still glowing when I get up at four to write a letter to Richard Linklater on The Big Texan menu thanking him for Fast Food Nation. Based on a book by Eric Schlosser, it is a film that Linklater put out a few years ago, but I only viewed it recently. If you think every little thing you do doesn’t implicate you in some unseen big picture, check this movie and think again.

Early morning, coyotes howl and sing and the tumbleweed is on my mind.
There’s not a lot of Panhandle left, just a few miles to Amarillo and
then about 70 more to the Texas – New Mexico border. 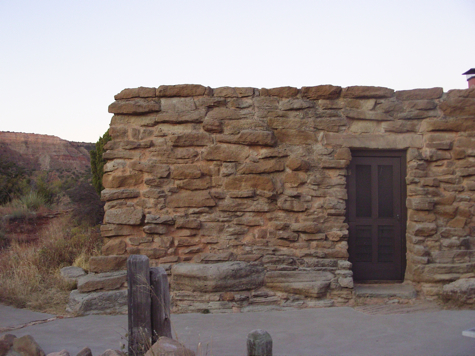 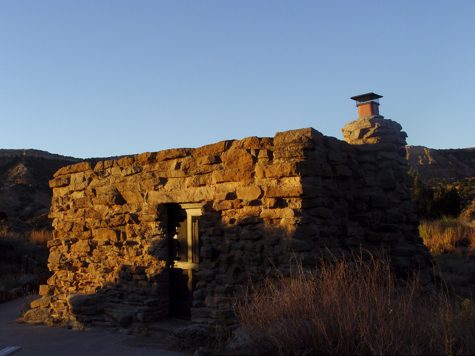 The cabin, next morning

A ways out of Amarillo, I come to Adrian, the midpoint of Route 66, back when it extended from Chicago to Los Angeles. I’ve been driving it whenever possible, but it’s not continuous anymore and in some of the places it does exist, it is virtually impassable.  The Midpoint Café is famous for pie I’ve heard and I’m feeling kind of Agent Cooper already, what with the secret nature of my mission. Of course it’s not secret to you, Dear Reader, you’re on the inside. So I pull over in Adrian, enter the café and ask what kind of pie they have today. Chocolate, chocolate chip, and uh, chocolate cream. How about chocolate, make that cream I say. I’m reminded of Tommy Smothers, who yelled fire when he fell into a vat of chocolate because, he reasoned, no one would come to his aid if he yelled chocolate. I wonder if the Stop sign thief would’ve surrendered if I’d yelled fire, chocolate or maybe even chocolate cream. She may have been stunned by the non-sequiter. But probably not. She could be like me — I tend to just absorb everything into one continuous context, don’t you? 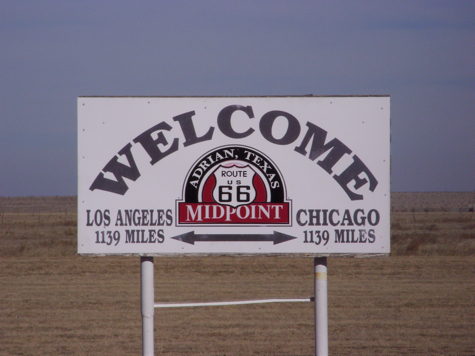 While I’m at the café I learn a little about Glenrio, a nearly empty town on the state line. It’s one of many places that suffered a change of fortune when I-40 was built to replace 66. Sounds like a good place for a tumbling tumbleweed. I head out, but I’m feeling a little wistful. I’m going to miss my little road buddy. During the five days I’ve been on the road I have often been comforted by the sight of it over my right shoulder in the bed of the truck. I reflect a bit on this. Thank goodness that thief chose the Stop sign. 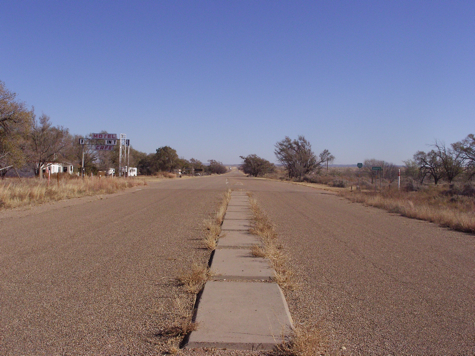 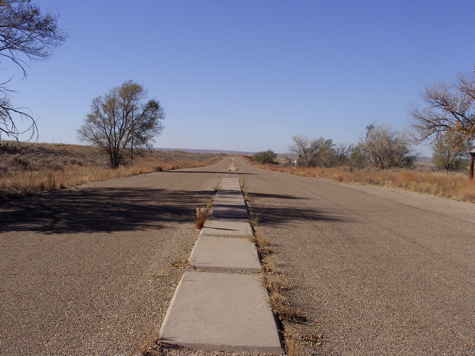 
Once I get to Glenrio I pick a spot right in the middle of Route 66, right on the state line, letting the wind determine the weed’s future residency. The sadness I’m already feeling is compounded by the diminutive size of the tumbleweed. It seems so small to be let go in this big country. I can recall six footers from the fifties and sixties when I lived in Lubbock. This little guy is about two feet. But I let it go, facing North so not to influence anything. The tumbleweed blows East, straight into Texas. 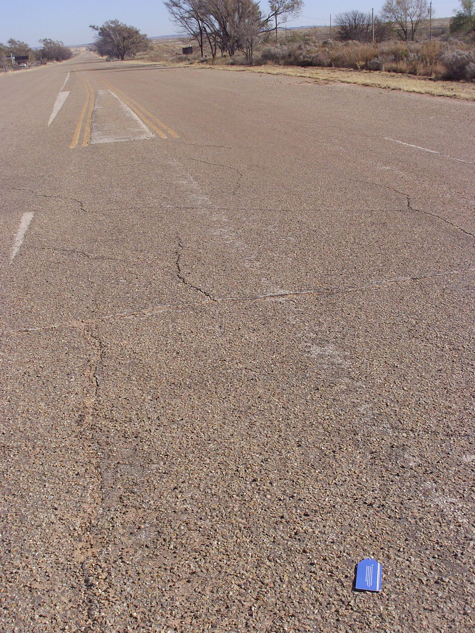 The tag fell off mid tumble

As I drive on I begin to sing: