Rather Be Fired Than Quit 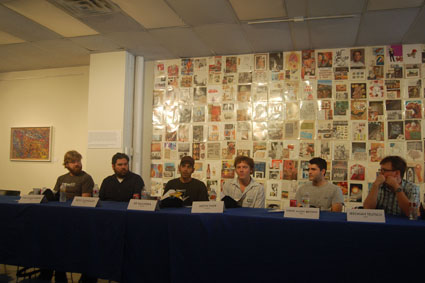 In making art, failure is an option. Sometimes, it’s the best option. And often it’s hard to tell the difference between success and failure. Just ask any artist, curator or art critic.

At least that’s the consensus of the artists and curators who gathered recently to discuss “I’d Rather Get Fired Than Quit” on view through Saturday, Oct. 2, at the Blue Star Lab, the new San Antonio downtown satellite art space operated by the Blue Star Contemporary Art Center.

Curators Ed Saavedra and Justin Parr are also the brains behind the Fl!ght Gallery and the Emvergeoning art blog. Generally representing the under-40 generation of San Antonio artists, they included where the artists have lost jobs on the invitation for this show. The artists reported being fired from Starbucks, a VA hospital, Baskin Robbins, Shoney’s, The Gap and CD Exchange among other employers.

However, the curators said they thought it was impossible for artists to be fired from the art world. Once an artist, always an artist. But they did challenge the artists to do the impossible.

“We asked the artists to do something that was probably more than possible given the time limitations,” Parr said.

In other words, Saavedra added, “Failure was expected.”

The most obvious failure was Bryan de la Garza’s “Portrait Failure,” though there was an inadvertent failure within the planned failure, which was to be a short film about a painter commissioned to do a portrait for a patron who finds the likeness unflattering and fires the artist on the spot.

An accompanying letter from “The Management” explains: “Due to the gross negligence on the part of the projectionist, the film sprocket holes were stretched out and to make a long story short, our short film cannot run. For this (the projectionist) has been reprimanded and subsequently fired.” 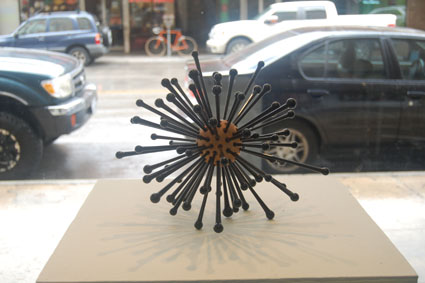 Glass artist Jake Zollie Harper created “Borospore,” which resembles a miniature Sputnik or perhaps a microscopic organism with glass rods radiating from an inner globe, which was a success. But he said people visiting his studio often find his discards more interesting than his completed creations.

“They pick up blobs of glass from my studio floor and want to buy them,” Harper said. “It makes me think there’s no such thing as failure in art.” 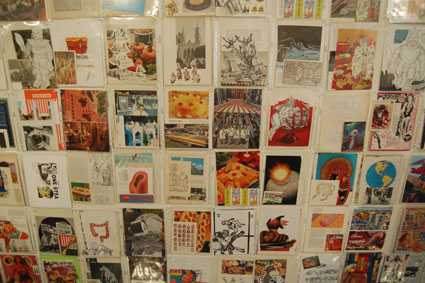 Beto Gonzales showed a wall full of pages from his scrapbook of collages. Some worked, some didn’t, but the point is the process he goes through to create art, often mixing and matching images from a variety of sources.

“I find it refreshing to get encouragement to fail,” Gonzales said. “I do my work outside the gallery system. I’m a compulsive image maker. But I find that galleries are  the best places to dump all this stuff I make. Sometimes I even get money for it.” 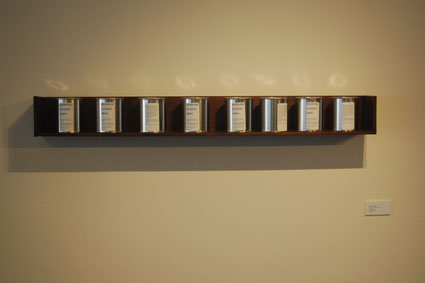 The biggest success of the show is Derek Allen Brown’s “Working Classic Gray,” a shelf of paint cans containing a mixture of black and white paint with a generic label that begins: “For use as an inspirational reminder to confront and fight racism of all forms.”

Brown, who uses a storage space as a studio, is forced to work within severe limitations. His landlord once locked him out of his studio saying that the artist wasn’t supposed to make things in there, much less work all night after the place was locked up. But Brown has made the most of his self-induced hardship, finding art where most artists only see mere paint.

“I’m recently unemployed,” Brown said. “So for once I had plenty of time to dedicate to this show. But I know there are artists with perfect studios who can’t produce like I can.” 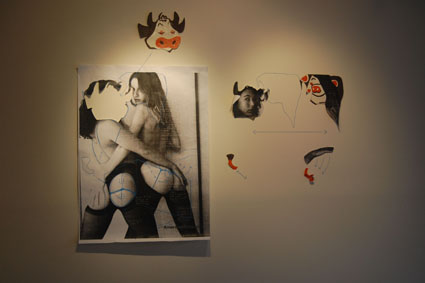 During the panel discussion, an older female artist took offence with Gabriela Santiago’s “Pop-Up Presentation,” which commingled a somewhat controversial fashion ad featuring two scantily-clad models and advertising from a popular San Antonio barbecue chain. Santiago used it to show how women are perceived as meat, drawing lines for cutting flank steaks from their over-exposed thighs, for example.

However, the older female artist compared it to masculine, sexist work that was done during the 1960s before feminism finally began to make inroads into the art world. A vigorous debate followed that showed individuals’ reactions to a piece of art, whether success or failure, is often determined by experiences and perceptions that can vary widely across the generations.

The Blue Star Lab is off to a successful start since opening last June. Located at 114 Broadway near Houston Street, the Lab is made possible by Zurich International Properties, which has turned several of the small storefronts along Broadway downtown over to artists. Next door to the Lab, furniture designer Peter Zubiate and artist Katie Pell have a space.