Less than a month ago, two murals in Texas Southern University’s historic Hannah Hall were destroyed. The works were painted in 1970 by Harvey Johnson. After artist, TSU alum and Glasstire blogger Robert Pruitt broke the story on Glasstire, the initial word from a university spokesman was that the destruction was accidental, that some painting crew had mistakenly covered them with a layer of white paint. But then TSU president John Rudley told the Houston Chronicle he ordered them painted over because they were “eyesores.”

Why did Rudley want 40-year-old murals destroyed? Did he really think they were “eyesores?” The murals were not severely deteriorated, apparently only a corner section had begun to flake. Is it because Rudley found them visually objectionable? They were very similar in style to work by the esteemed John Biggers , Johnson’s professor at the time and the man who began the TSU mural program in which graduating art students painted a mural in a campus building. Johnson painted the works as a student at TSU and he went on to be come a professor there as well as an important artist in his own right. He retired in 2007 after 34 years at the university.

In the same Chronicle article, Rudley was quoted as saying “I know where the Biggers are.” Those, apparently, he deems worth preserving. But if that is true, if Biggers is Rudley’s gold standard of TSU art, why would he destroy work that looked a lot like Biggers’ (students often paint like their professors) and was created by an artist whom Biggers later chose to collaborate with on murals?

Dr. Alvia Wardlaw, TSU Professor of Art History, Director/Curator of the University Museum and former Curator of Modern and Contemporary Art at the Museum of Fine Arts Houston had spoken out in defense of the works. So had MFAH Trustee and TSU professor Dr. Sarah Trotty. Rudley chose to ignore the recommendations of two noted experts who also happened to be on the faculty of his university. Why?

An excellent editorial in the Houston Chronicle advanced the theory that Rudley objected to the works because of their titles. The titles of the murals, Dere’s a “Han Writin on de Wall” and Mothers of “the Fathers and the Son”, were purposefully colloquial. Quoted in the Chronicle, Rudley had said “When I bring dignitaries to campus, I can’t have them seeing that kind of thing. All art isn’t good art.” (Wasn’t impressing “dignitaries” part of Priscilla Slade‘s, Rudley’s predessessor, justification of the $500,000 of TSU money she was accused of spending on furniture, landscaping, bar
tabs and a $40,000 dollar set of Neiman’s china?) Did Rudley feel embarrassed by the titles when he walked past with “dignitaries”? If so, one wonders where he stands on the dialect-filled works of writers like Zora Neale Hurston and William Faulkner? Does he think their work should be banned from the TSU library? 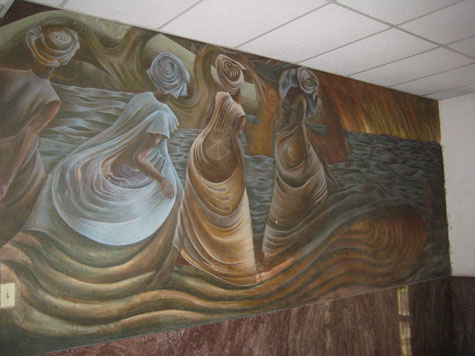 Harvey Johnson’s 1970-71 mural, Mothers of the Fathers and the Son

After the Chronicle got hold of the story, Rudley announced that he would allocate $50,000 for the preservation and restoration of the remaining murals. The money is undoubtedly welcome; efforts to raise money for the murals’ preservation and restoration have been going on for years, and there had been talk of having Hannah Hall and its murals declared a National Historic Site. If you want to put a biblical spin on it, the sacrifice of Johnson’s work may let others’ works live on.

But as one commenter on Pruitt’s blog post pointed out, Johnson may very well have legal recourse under the 1990 Visual Artist’s Rights Act (VARA), which, among other things, essentially states that just because someone owns your art does not mean they can intentionally destroy it. (The U.S. government and 11 other defendants had to pay muralist Kent Twitchell a $1.1 million dollar settlement for painting over his 70-foot portrait of Ed Ruscha.)

The Council for Artists Rights is a non-profit that often invokes VARA its frequent emails, albeit almost exclusively on behalf of Dallas “wildflower artist” Chapman Kelley. (See my post about it here.) Most recently in was because Chapman Kelley felt his sand dune painting was violated when the Dallas Museum of Art added an audio element to a group exhibition. Although Johnson’s work didn’t have its delicate sensibilities offended by a soundtrack, it was completely obliterated. Surely they’d want to take up Johnson’s cause. 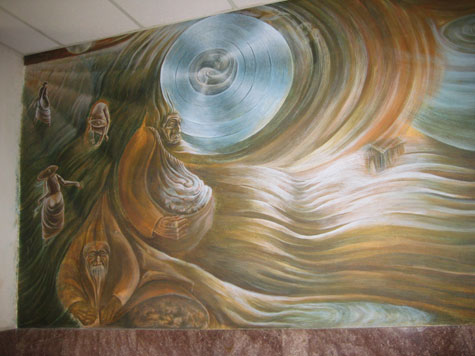 Has the artist filed an original complaint with the court?

Not to my knowledge.