Mona Garcia is exactly what non-Texans expect a Texan to be. A native Houstonian, she comes from oil and ranching families. She’s polite, but unafraid to speak her mind. And Mona’s a bona fide raconteur.

Despite all of her Texan eccentricities (Texantricities?), for 37 of her 73 years Mona lived outside the United States. I met her recently in her office at Building 98, the former Fort D.A. Russell’s officers’ quarters and club, and the current home of the International Woman’s Foundation, which Mona founded in 2002.
“It’s called the International Woman’s Foundation because I am an international woman,” Mona explained early on in the course of our conversation. We sat on either end of an antique couch she inherited from her grandmother, across from a heavy wooden desk hand-carved for her from Amazonian cedar. Mona is an interior designer; she has decorated houses on four continents. 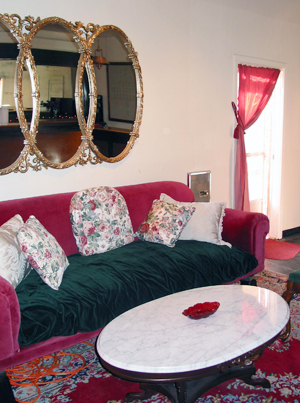 Mona furnished Building 98 with antiques from her parents' ranch house.

Mona first had the idea for creating a haven for female artists while living in Peru with her husband and children in the mid-1970s. Then 37, she watched as two of her friends—both female artists—died after circumstances left them without financial support and family stability.
Nearly three decades later, with financial assistance from her mother (whom Mona describes as a Baptist, feminist, Democrat and teacher), Mona purchased Building 98 and began renovating it to serve as IWF headquarters. Today, the foundation, whose mission is to enhance the intellectual, spiritual and physical lives of women in the arts, hosts artists in residence ages 40 and older, and holds art exhibitions, concerts and performances.
Mona works tirelessly to expand IWF offerings. During our conversation, she outlined the menu for a future café (roasted chicken, pommes frites, crepes Suzette), and the IWF website details long-term plans for a spa and health center. (Yoga and ballet classes are now held weekly in the building’s newly renovated L-shaped ballroom.) She’s organizing a benefit concert featuring Texas State Musician Sara Hickman to support the cost of building a meditation labyrinth on the grounds of Building 98. Mona explains that the garden will be modeled after the labyrinth at Chartes Cathedral, and will include purple sage, rosemary and thyme with a gray stone path and be open to the public.
Mona moved to Marfa 14 years ago with her husband, Rodolfo Garcia Salazar y Ledezma (Rudy for short). (He’s of French and Basque origin, Mona explains.) “This was the most foreign place we could live and still be in the U.S.A.,” she says. The old-timey feel of the town also attracted the couple; Mona describes Marfa as being “like things were 50 years ago.”
Although the Garcias planned to settle down for retirement in Marfa, an elderly man named J. A. Roosevelt distracted Mona from those plans. Roosevelt moved to Marfa in 1937 after his family (the same Roosevelt line as Franklin Delano, Mona explained) sent him west to find new ranch land. 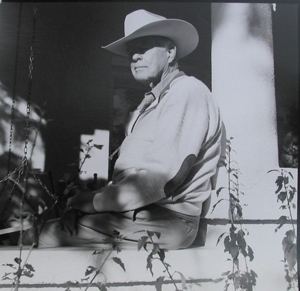 Mona keeps a black-and-white photograph of Roosevelt in a clear plastic frame on her office bookshelf. She had me take the photo down for a closer look. “He was a man’s man,” Mona says. Born in Long Island and educated at Yale, the man in the photograph looked more like a cowboy than a gentleman from the East Coast. Roosevelt decided to stay in Marfa and made the former officers’ quarters his home at some point after Fort D.A. Russell closed in 1946.
In 1999, Roosevelt approached Mona about buying the building, which she did in 2001. It was important for him to find a buyer who was interested in art and in the area’s military history. Two of the rooms in Building 98 are covered in World War II-era frescoes painted by German prisoners of war captured in North Africa. Thanks to the dry climate of the Big Bend region, these murals remain in good condition, with the exception of some peeling due to water damage caused by a leaky roof. 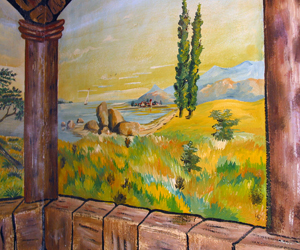 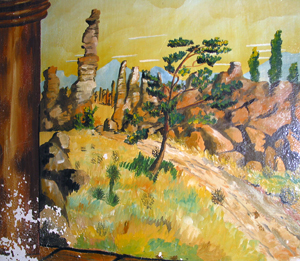 Since purchasing Building 98, Mona has done her best to preserve the murals. She raised $1.25 million in renovation funds, which allowed her to replace the roof to prevent further water damage. She’s applying for grants to help add climate control and to support the cost of hiring conservators to stabilize the murals.
The murals in the gala dining room, which would have seated 40 to 50 guests, depict landscapes of the Big Bend region and Germany as viewed through Medieval cloister-style columns. Separate panels show scenes of a stag standing in a green field, a small village nestled in between mountains and a lake, and contrasted by paintings of yellow grass, yuccas and cactuses. The adjoining room, Roosevelt’s former library, is covered with western scenes: a chuckwagon dinner, cowboys branding a calf, and a ranch house. 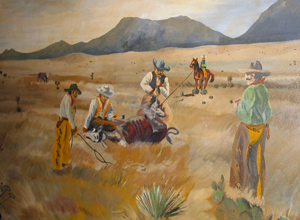 A depiction of branding on the wall of the former library 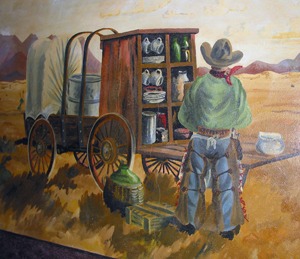 A chuckwagon scene on the wall of the former library

September 10-15, the IWF hosts an exhibition featuring artwork by Julian Press, the son of Hans-Jürgen Press, one of the two soldiers who painted the murals. (Robert Hampel was the other muralist.) After returning to Germany following World War II, the elder Press enjoyed a successful career as an illustrator. Also on display will be the work of Johannes Wunner and Sallie McIlheran. 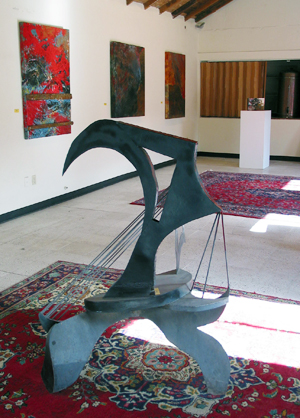 Other upcoming events include the Sara Hickman concert and an exhibition of work by Mona’s son Gregorio Garcia Von Blucher, who died earlier this year. Charles Peveto of the Texas Historical Commission curates the show, which opens November 26.
Mona says when she first purchased Building 98, locals doubted her commitment to the project. “When I first started, people were like, ‘Mona Garcia, she’s just dabbling.’” But nine years and $1.25 million later, Mona is still working to strengthen the IWF programming and to raise the funds necessary to preserve this unusual piece of military history.

Hello Mona,
I was visiting my cousin, Gary Mitschke, in Marfa a few days ago, and he told me about your gallery and that I probably would enjoy visiting it.
We stopped by the Chamber and Khaki (sp?) raved about you and your tours. I wanted to contact you and express my interest if you are planning one in the near future. Gary is the fire chief in Marfa, and I think he would also be interested, if he is available.
I live in Fort Davis and look forward to meeting you.
Thank you.
Kind regards,
Mary Margaret Mitschke

Mona, I am Mary Adams mother. She gave me your e-mail address and suggested that we would enjoy knowing each other. Would love to meet you sometime when we are down that way. It will probably be in the fall. As soon as school is out we are leaving for the summer to visit Mary in the Netherlands.
Donna Finch Adams