“On the Road” at Artpace

Dharma Bummed, But No Harm Done

And even without wanting to, we always leave traces.

The mares that carry me as far as longing can reach rode on, once they had come and fetched me onto the legendary road… 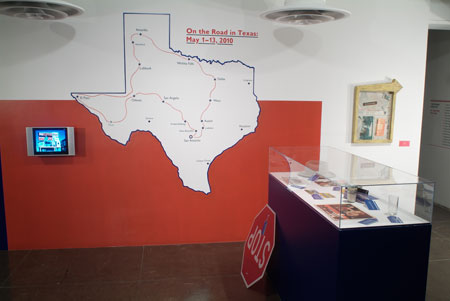 Curator Jens Hoffmann, Director of the innovative CCA Wattis Institute for Contemporary Arts in northern California, accompanies his Artpace Hudson (Show)Room exhibition On The Road with a list of road movies, each watchable on request, but there is one conspicuously missing; the one I’d most like to see right now: Pee Wee’s Big Adventure. Granted, it doesn’t register the cool, dusty, rugged tones of some of the other films, but in it no one really needs any snakeskin. I’d like to see it again for at least three reasons.

First, for the scene in which Pee Wee pours a huge pyramid of cereal into a bowl and tweaks one bite right off the top before chuckling and patting his lips with a napkin. This seems to be the sort of humor brought to the table by Mr. Hoffmann.

Plus, it would be good to verify that there really is no snakeskin in the Pee Wee film. 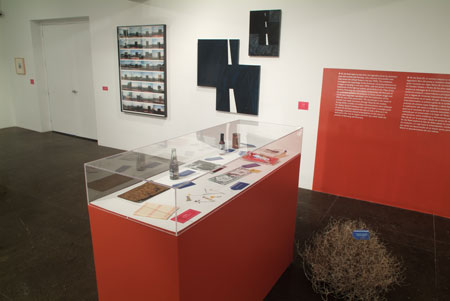 The Curator, assuming the guise of cultural anthropologist, climbs into his rental car, heads west I’m guessing, into the myth that calls him to his roadside service, the gathering of this glibly entertaining collection of Texian Artifacts which he has brought back to do vitrine-time in some misguided outpost of a visitor center, all done up pretty-like with tags of provenance and such.

The object-filled displays are bordered on four walls by collage, paintings, drawings, prints, posters and photographs by fifteen artists. A STOP sign The Curator found on the ground “in the middle of nowhere” leans against a case.  The label says that when he found it, he stopped immediately and turned around. I guess that’s just how you roll when you work in a museum, surrounded all day by signs that command, “DO NOT TOUCH.” 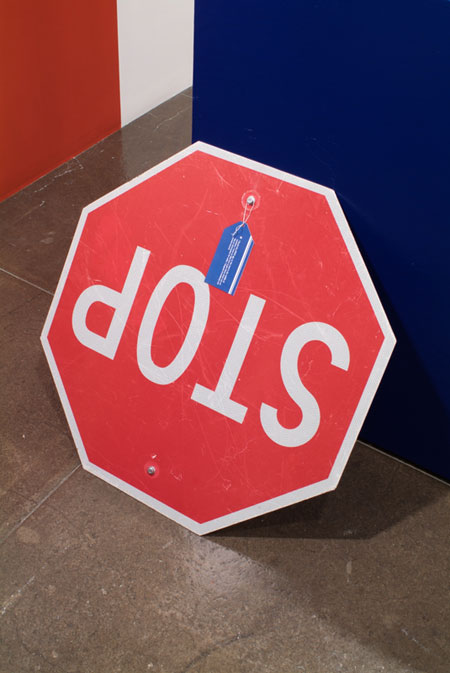 Seems he found a 1952 license plate and wondered if it had been on the side of the road for 58 years. Not likely, I’d reckon—usually these things were attached to cars the year they come out. But this is the sort of intentionally clueless (and delightfully humorous) speculation that accompanies these items.

Then there is the Lone Ranger flashlight that confounds The Curator’s archaeological dating instincts— he can’t guess how old the flashlight is because it comes with a Morse code key—implying that it could be from the 19th Century, possibly predating The Lone Ranger by up to seventy years! That, friendo, is solid fieldwork.

The map of The Curator’s travels comes prominently provided on a wall. It brings to mind the perimeters of René Daumal’s Mount Analogue, an invisible mountain known only to Non-Euclideans. This mountain is scattered about with peradams—transparent objects that are just barely perceptible to the unaccustomed eye. 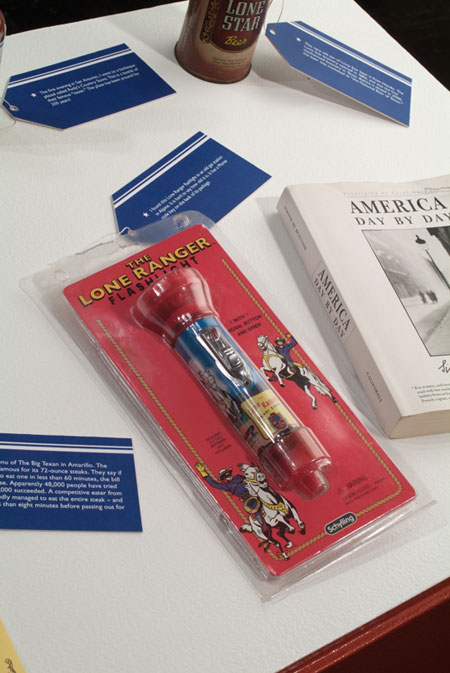 Let’s just say that the Texian Artifacts are peradams. We’ve seen them all before—that’s why they’re invisible. We think we know, but we do not know. Our stately pride has caused us again to fall. The Curator has rendered obscure that which was generic. Genius!

I love this one:

Right into the side of his car!

This isn’t the first time a Regional Profiler has come from The Outlands to alter the landscape. There has been a pretty steady stream of this in San Antonio for quite sometime, probably most successfully by Yutaka Sone (Artpace, 2001). But this is a little different. Hoffmann is profiling the profiler. He admires a jar of unlawfully collected sand from White Sands National Park and blithely guesses that “it just blew into the jar”—as all the while an illegal wind blows through this line about Will Rogers (who never met a man he didn’t like):

“I had never heard of him before, but he seems like a guy I would have liked.”

[By the way, there is no basement in Artpace.] 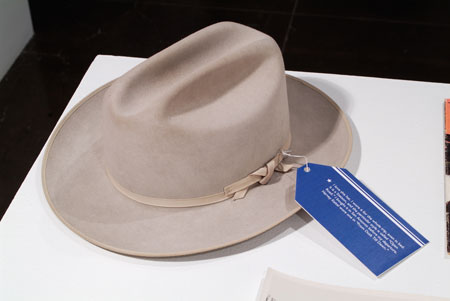 On The Road gathers the high points of a well-known topography while attempting to map the contours of a hypothetical visitor who journeys into a mythic grid that obscures the nameless expanse that exists just beneath it. Even if his intentions lie elsewhere, The Curator inadvertently lays open another world made invisible by the high visibility of all the stuff that is placed upon it, like when you’re reclining in a Barcalounger and suddenly realize that the ghost of your uncle is already lying there. A similar lack of presence governs the art works that line the walls in the gallery. They seem peripheral, as if sealed off by the inquiry going on in the center of the room.

So along side some legitimately great films like Badlands and Alice Doesn’t Live Here Anymore, The Curator includes the pointless Vanishing Point (Richard Sarafian) and the perhaps too pointed Zabriskie Point (Michelangelo Antonioni). Both of these movies feature narratives that drive toward the same terminus—the death of the protagonist. The viewer is also driven—into the void left on the list by the absence of Thelma and Louise.

No one can save the Sarafian film. Not Jake, the hippie biker desert dweller with beer tab headband. Not Kowalski, the hero, who coolly turns down some weed and goes for Marlboro Reds instead. Not even the nameless, naked, Honda-riding blonde who offers awestruck the respect such wisdom inspires. 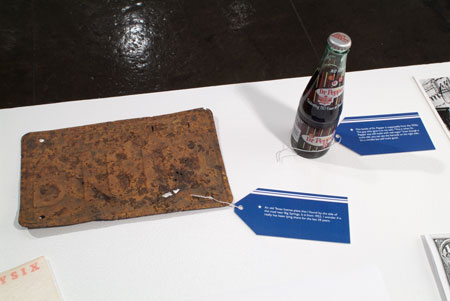 As it turns out, Zabriskie Point is the most engaging painting in On The Road. It is filled with stunning tableaus, among them the view through the office window of Sunny Dunes real estate entrepreneur Lee Allen. The floor to ceiling window frames a huge American flag flying in the foreground with a black and gold gothic/deco bank building behind. The sense of suffocating corporate doom crops the flag as does the window. The mesmerizing, slow motion explosions that end the film are inter-cut with images of high degree honchos, prospective investors in Sunny Dunes—they are gathered at Allen’s poshmodern Arizona desert home. You can’t take your eyes off the way their reflections are collaged into the map of the proposed marina, where living will be “casual yet affluent” and “water is gold.” Soon their world will be destroyed to the tune of Pink Floyd’s Come In Number 51, Your Time Is Up. Most all of the music and sound sequences in the film are well edited and rightly chosen. Nonetheless, the gratuitous narrative is belabored with stilted performances and silly dialogue. The best line in the whole film is “So anyway should be one word.” Released between Blow Up and The Passenger, it comes off as Antonioni attempting to translate Godard’s Pierrot le feu or in some ways his own Red Desert into sixties American counterculture. It’s a bad fit, but the more I watch it, the more I’m willing to forgive its flaws and just go with it as a visual feast.

[There’s more than one way to get fresh air into the East Flat.]

If cinematic liberation is what you’re seeking, you might be well served by checking out Janet Biggs’ video piece currently showing at the McNay Art Museum across town. Titled Vanishing Point, in reference to the movie, it is an elegant and engaging meditation on hope and recovery. The New Yorker mini review of the piece asserts that the association with the like titled movie “adds little, seems aimed at hipster cred”—ironic given that any credibility that Sarafian’s film has is merely of the cult variety, meaning that the movie was bad when it came out but decades later lots of people say they like it. Yes, it is hip to like bad movies. Don’t care. The cult thing is a dynamic which before the VCR used to be driven by scarcity, but since, in the even more ubiquitous availability of the digital period, has come to be aligned with cultural conflation—that flattening that comes with the desire to accrue the tropes of another time without having lived in them in a kind of sub-cultural bucket-brigade of cool, by way of (reissued) association.

Whether hip, cool or just silly, Vanishing Point reminds me of something I read somewhere just after the publication of a book I didn’t read, The Greening of America —that it was a book published in 1970 about 1967 for people stuck in 1963. And in the same way, as an archive of American counter culture, this film and a number of others like it (Two Lane Blacktop, The Strawberry Statement, to name just a couple) are off the mark just as Greening was. All of which is telling regarding The Curator’s two step-cum-Waltz Across Texas, in that by redefining the landscape he was moving through in terms of the cultural clichés that litter it, he missed that which he was trying to apprehend. Or he’s documenting the experience as if that were the case. The title panel of the exhibition claims that the road (but maybe not his road?) is “a rite of passage, a journey toward emancipation on the way to a destination that may be largely unknown but which holds the promise of liberating self-discovery.” But the talismans that The Curator brought back from his quest are anything but unknown—except in the sense that the cliché renders them invisible. Perhaps the inane commentaries tagged to each item are incantations through which the alternate universe, the one that holds the journey The Curator didn’t take, becomes visible to subsequent travelers.

Benjamin Engeli is known for his aubergine preserves. He has a basement full of the stuff.