Yes, it’s a 1000 degrees outside but if you can just make it through the parking lot, these Houston spaces have great air conditioning – and great art. 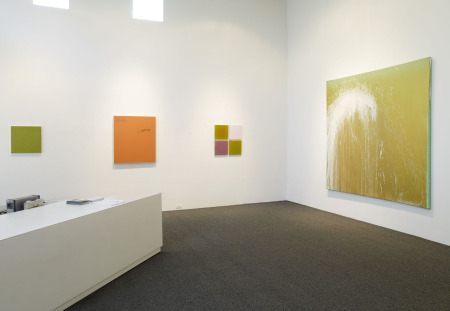 Lordy, lordy, Texas Gallery is forty. Their current show called, shockingly, “40” has been extended through August fourteenth. It’s got an eclectic array of work and some legendary names. The collection of paintings hung in the gallery’s entry is the visual equivalent of cold cantaloupe in July. They have a cool lushness and one of them, Rachel Hecker’s large painting of a tiny paint chip with the word “wrong” scrawled across it, is actually melon-colored.  (The work is from Hecker’s Texas Gallery show in which she monumentalized bits and pieces of ephemera like Post-It notes.) There’s a really lovely shimmery Pat Steir with watery green undertones. In the same room, Joanna Pousette-Dart has one of the best and least goofy shaped canvas paintings I’ve seen. The painting flows beautifully, the irregularly shaped canvas seems a natural part of the work rather than an affectation. 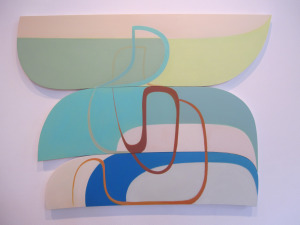 There’s also a goodly amount of exuberantly decorative work. I always love Brazilian artist Beatriz Milhazes ’ colorful painted extravaganzas of pattern. And when it comes to rhinestones, Mickalene Thomas uses them better than anyone. Her portraits are defined by gorgeously hued sections of glittering pavé. Meanwhile the bricolage-packed “quilts” of Louisiana artist Shawne Major channel the elaborate costumes of Mardi Gras Indians. 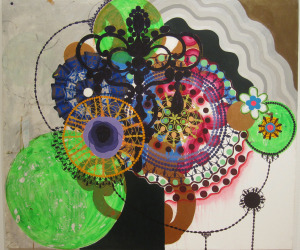 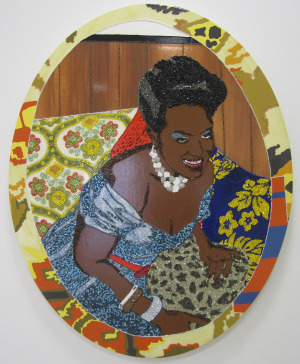 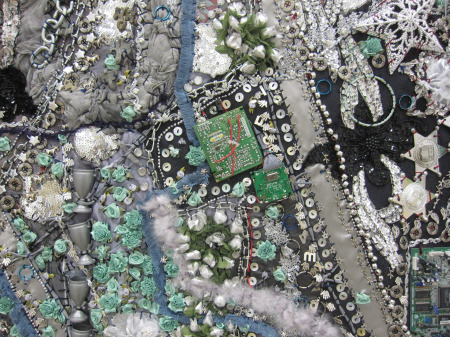 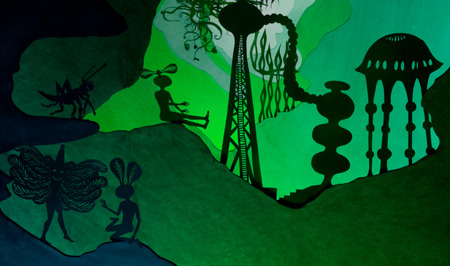 Andrea Dezsö, Sometimes in My Dreams I Fly, 2010, installation detail

Summer is a great time to check out the university galleries – the parking helluva lot easier. Andrea Dezsö’s haunting installation at Rice Gallery, “Sometimes in My Dreams I Fly” is fantastic. The artist is known for her box-like “tunnel books” which create scenes through paper silhouettes. Dezsö amped up the difficulty factor and the impact for her luminous installation behind Rice Gallery’s 44-foot window. A series of glowing “grottos” offer multilayered scenes, visions of otherworldly beings frolicking in surreal environments.

Sometimes in My Dreams I Fly
Rice Gallery
Rice University
Through August 8, 2010 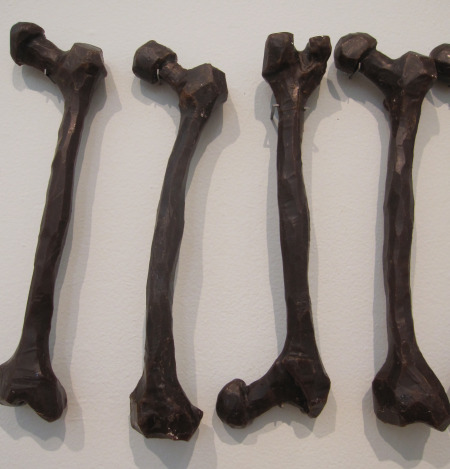 Texas Southern University’s University Museum has a show of powerul works by Houston artist Kaneem Smith. Smith has an incredible way with materials, weaving and felting her own fabrics to use in her sculptures. Her work has an organic, often visceral feeling to it. A massive length of crocheted jute, hung on the wall with fleshy bits of plastic stuck to it, feels as umbilical as its title. Her series of bones cast in dark brown wax look like archaeological artifacts. Smith displays them vertically on the wall, arranged in long horizonal lines, they read like chromosomes. Two fleshy-looking cylindrical fabric sculptures hang side by side, like butchered hogs. In particularly vibrant work, raw cotton is dyed crimson and lines a woven, womblike vessel. Smith’s installation of a massive, monolith-like cotton bale and antique weights, emanates a mournful gravitas, a silent testament to African American toil and suffering. 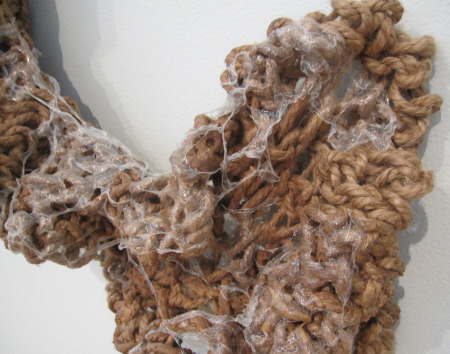 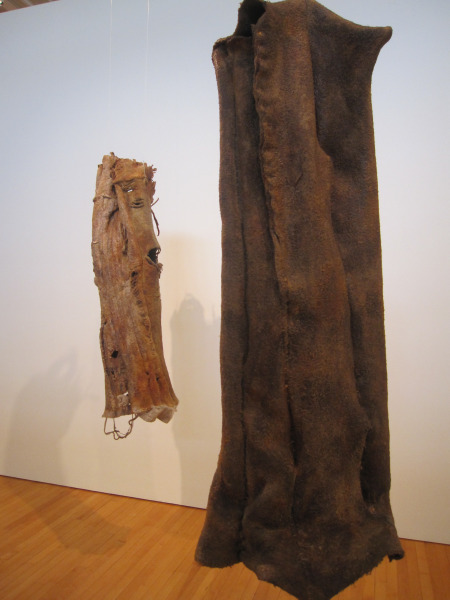 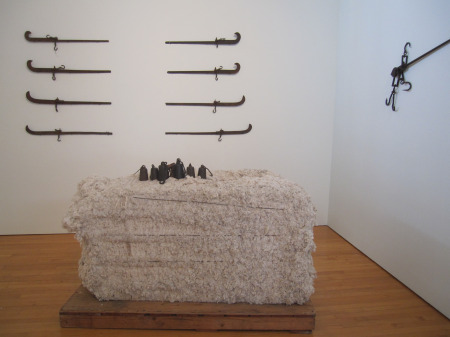 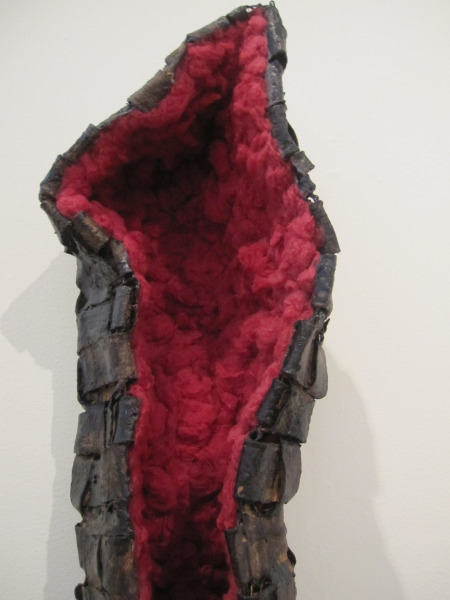 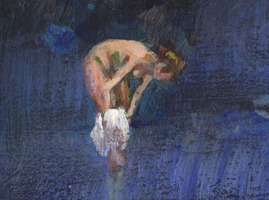 The Blaffer Gallery, recently rechristened the Blaffer Art Museum, has
an interesting show upstairs, tucked back behind the Tomás Saraceno
exhibition. What at first seems to be a show of paintings, is in fact a
show of videos of paintings. Working on a single canvas, Jacco Olivier
records the evolution of his paintings on video. But its not some
“how-to”, start-to-finish progression, the images ebb and flow, the
painting creates an animation. Olivier’s images, a nude bather, a
portrait, and a landscape are tied to the history of painting itself.