Charles Russell at the MFAH 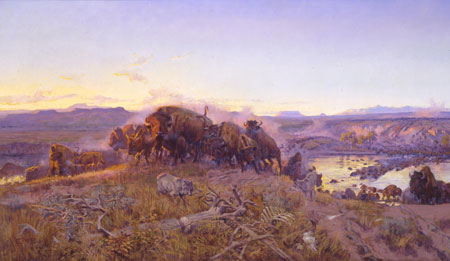 I recently attended a press preview for The Masterworks of Charles M. Russell at the Museum of Fine Arts, Houston. I especially wanted to see this show because it reminded me of a period of my life when I was 13 and spent an entire summer copying Russell’s horses, buffalo, cows and dogs in preparation for my intended career as a veterinarian.

My family has never been overly familiar with the work of any but a handful of artists, and the few that they admired ran more along the lines of the illustrative type, i.e. Currier and Ives, Currier without the Ives, Howard Pyle, Maxfield Parrish, Norman Rockwell, etc. Charlie Russell was among this group, and was especially revered as my family, in particular my mother’s side, felt a certain kinship with the man. Like Charlie, my grandma’s family had lived in Montana and Missouri, and like Charlie, they had been the cowboy type. 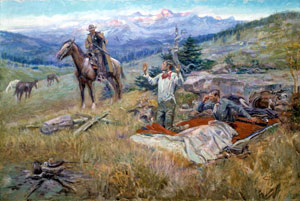 Charlie was born in 1864 in St. Louis, Missouri, son of a successful businessman and his wife. We’ve all known people like him, and maybe some of you out there have lived some version of his story: i.e. charming, affable, told a good story, prone to exaggeration, never learned to spell, humiliated and whipped by teachers, loved to read adventure stories, drew on anything, made horses out of wax, won an art competition, took art classes (but hated the structure), dropped out of East Coast boarding school, moved west to herd livestock, drew a picture of a starving cow, became a famous artist. This is the story of Charlie.

A mostly self-taught artist, his work was influenced by adventure stories and what he called “yaller back novels,” the paintings of Charles Wimar (a German-born artist who depicted mostly imagined buffalo and Native Americans in the Düsseldorf style) and engravings in periodicals such as Frank Leslie’s Illustrated Weekly and the Police Gazette. Charlie created both a real and a romanticized West: Indians herding buffalo, drunk cowboys riding horses into saloons, bandits robbing stage coaches, Canadian Mounties arresting Indians, Indians stealing cattle to feed their starving families, cowboys purchasing or mounting Indian maids. Real because he actually worked as a cowboy, and romanticized because by the time he moved out west most of the buffalo had been decimated and replaced with sheep and cows, and most of the Native Americans, likewise so, only with white people.

I was crazy about Charlie’s work as a kid, and one of my main objectives in going to his MFAH show was to see if there would even be a vestige of those same kind of feelings, 41 years later. I also decided that if now, as an adult, my reaction was one of immediate hatred, I would somehow force myself to find the middle way. (It’s a good thing I decided to do this, because otherwise I would have given up on the man after having only looked at the first gallery, mostly filled with wooden and sometimes prurient work. I would be back in the saddle of my cow pony rant, raising dust about readers of Louis L’Amour.) 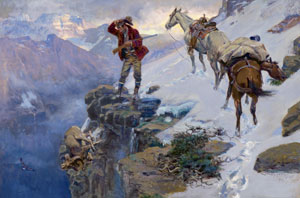 Since I have difficulty “sticking with the group,” I wandered away from the journalistic preview with my tiny, open mind in hand. The other galleries were mostly empty, free of distractions, and thus gave me an opportunity to really look at and think about Charlie’s paintings. For the most part the artist worked in the kind of innocuous style that appeals to Rodeo Supporters and Beefy Business Types, and a certain subset of Those People Who Get Unduly Upset When Somebody Keys Their Car. His work is not threatening, it breaks no artistic barriers (which was just fine with him) and it never does anything that might challenge people’s intellectual boundaries

Despite the provinciality of the work, and the artist’s propensity for repetitiveness and the occasional bad title (Meat’s Not Meat Till it’s in the Pan), as well as a predilection toward depicting Indian maidens as his day’s version of our Anna Nicole Smith, in addition to either not being able to paint faces at all or having the habit of giving everyone the exact same facial features as though all mankind were the by-product of the same two parents, I searched within my soul and found a couple of reasons to admire certain aspects of the man’s work, viz: 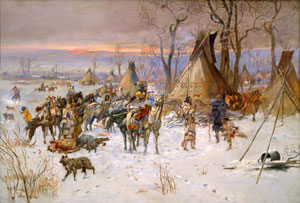 Now we can decontextualize (or whatever the word is) his response by pointing out that at the time that these were painted, there was a trend among white people to travel out west to look at the Indians, romanticizing what had been, while at the same time allowing themselves to exchange feelings of guilt for those of pity. Or you can throw Charlie into the pool of the many, many ethnologists and anthropologists who were scrabbling out west to document the Noble Savage’s way of life, before it had completely been eradicated. But personally, I think neither is the full story.
Here’s what I think is the source of his empathy.

Charles Marion Russell had two second cousins, George and Charles Bent, sons of his Great Uncle William. The Bent brothers’ mother was a Cheyenne, and both boys had been raised in her tribe. As a child, Charlie heard stories about this family, and included among the stories was a major one—that of the Sand Creek Massacre of 1864. 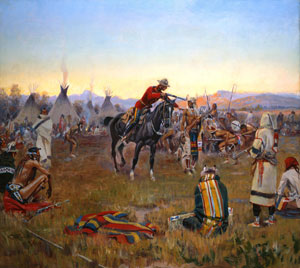 The background of Sand Creek is this: In 1864, after a decade or so of gold and silver rushes and violent confrontations between whites and native people, John Evans, the territorial Governor of Colorado, thought “man, we could get rich living here, if only there wasn’t that little Indian Question.” And so Evans asked the tribes in that area to sell their lands and relocate to reservations to which they replied N.O. spells no. Thus rebuked, Governor Evans enlisted Colonel John Chivington and his troops, each and every one of them more drunk than the next, to take care of the situation, which they did by viciously murdering and maiming 400 Arapaho and Cheyenne men, women and children, regardless of the fact that prior to the attack, their chief Black Kettle had raised a white flag. I don’t know if the Bent brothers survived, but they fought on their tribe’s side.

On a final maudlin note, when I looked through the exhibition, I started thinking about “fading ways of life” and documentation of same, and I started crying. Who is going to be our Charlie Russell? Who is gonna go out there and paint the coral reefs, and dolphins and oysters and pelicans? Who is going to paint an oyster shucker in a New Orleans restaurant, and a family playing in the surf on a Gulf Coast Beach? Who is going to paint that last plate of shrimp etouffee?

BethSecor is an artist and a writer who hopes she isa lot nicer to people than her evil typing fingers are.

Also by Beth Secor:
{ Review }
The Yes Men at DiverseWorks