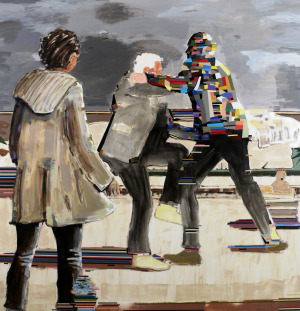 Matthew Bourbon populates his paintings with figures handpicked from a variety of sources; viewing them is akin to channel surfing through the vast array of human folly available on late night cable. But Bourbon mixes things up in his large acrylic paintings, juxtaposing abstraction with figuration. Our Splendid Defeat is an aptly contradictory title for the exhibition and its contradictory imagery. The overall tenor of the work is both frantic and melancholic.

Bourbon titles his paintings with fragmented phrases that hint at a narrative for the work. The paintings portray a very particular point in time, even if culled from a plethora of sources. But that rendered moment is by no means static; Bourbon’s paintings make you feel that if you blink, the image will change.

One way the artist achieves this is by depicting figures in brushy, rather than modeled, sepia tones, sometimes shifting to grisaille. But Bourbon subversively obscures random figures with brightly colored blips and stripes of varying lengths and widths—an element in the work that can best be described as noise. And it is this dissonance that dominates the work. Each canvas depicts some sort of situation that is then interrupted and assaulted by these visual elements. What results is an abstraction of form and space that further obfuscates the already mysterious situations.

In “Natural Folly”, Bourbon portrays several leisurely-posed figures, one of them topless. But vividly colored horizontal stripes interrupt the figures and dominate the composition. One of the figures is almost completely overwhelmed by them. The resulting conglomeration of persons and abstraction holds little literal meaning, but lures the viewer into constructing narratives for the image as they revel in the visual cacophony. In another work, “The Words We Agreed Upon,” a man and a woman sit in a drawing room, perhaps playing a game of cards. The interior is invaded by abstraction, this time chunkier and forming a multicolored, seemingly parasitic, growth on the man’s head.

Bourbon plays with both formal tensions and narrative, infusing each with the other to create work that is intriguing and complex. 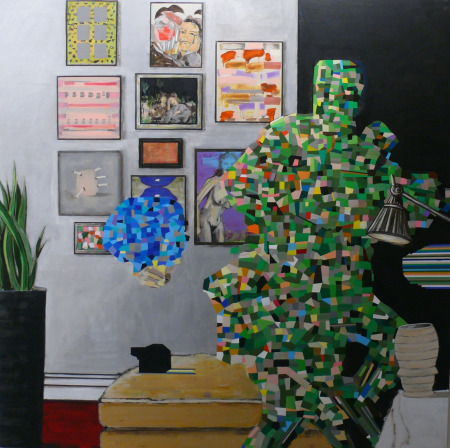