“Maurizio Cattelan” at the Menil 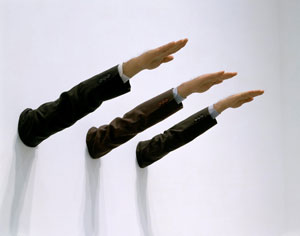 Where’s Maurizio? might be a more appropriate title for the Maurizio Cattelan exhibition at the Menil Collection. For the show, the Italian artist worked with the (recently-departed-for-LACMA) curator Franklin Sirmans to strategically intersperse his art among the Menil’s permanent collection. Cattelan is a self-taught artist known for work with a satirical bent, and the ensuing “Where’s Waldo”–like search is at turns witty, provocative, poignant and annoying.

I loved the placement of Cattelan’s 2007 Ave Maria, three polyurethane arms extended from the wall in a fascist salute. It’s hung in a room of overly-imbued-with-spirituality Mark Rothkos. A gallery of Barnett Newmans leads into it, abstraction über alles. Rothko and Newman were both endorsed by Clement Greenberg, the modernist critic with a fascist style (if not fascist politics).  Cattelan’s humor is even less PC if you consider that Rothko was Jewish — but putting the abstract religiousity of Rothko’s work in the same room with a Hitler/Mussolini greeting is in line with other irreverent Cattelan works like La Nona Ora (The Ninth Hour), the artist’s 1999 wax sculpture of Pope John Paul II struck down by a meteorite. However, like all of the placements in the show, there is the question of how deeply one should dig for associations, and which ones the artist and curator had in mind. Cattelan knows people are going to, rightly and wrongly, be offended, but that doesn’t seem to phase him. He’s got no sacred cows — or dogs or horses. 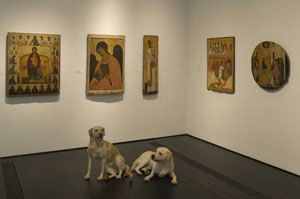 Installation view...Photo credit: Hester + Hardaway, HoustonCattelan's sculpture of two taxidermied yellow labs and a tiny yellow chick is placed on the floor of a small room hung with Byzantine icons. God backwards guards an Easter chick. In a room of late, and not entirely great, Magritte paintings from the 50s and 60s, Cattelan placed a taxidermied horse, lying in his side, a wooden sign hand-painted with the letters "INRI" stuck in its belly. The proverbial dead horse references Christianity/religion and, for me, extends to Dominique de Menil’s zeal for art and spirituality.

Magritte was the adored artist of the de Menils, and Cattelan is even more irreverent in a room of the artist’s early paintings. A polyurethane hand, all the fingers snapped off save for the middle one, hangs from the ceiling. It summed up my sentiment towards yet another one of those sexist surrealist works, Le viol (The Rape),(1934) the Magritte painting of a woman’s naked torso as a face. [I don’t visit the surrealist galleries very often, and wandering around to find the Cattelans reminded me how shitty a lot surrealist painting is — Ernst in particular, de Chirico largely excepted. Give me Surrealist objects any day.] 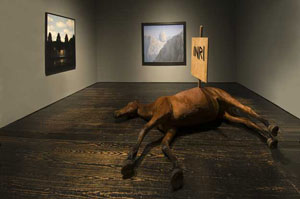 The Menil has a history of having artists intervene in the collection (Robert Gober, Otabenga Jones, David McGee and Vik Muniz among them), usually selecting pieces and curating/creating an exhibition/installation. I generally think it’s a great idea, but Cattelan’s approach does have its drawbacks, and there is a certain sort of clubbishness to the installation. You have to know where to look, be familiar enough with the permanent collection to spot something out of place or be familiar enough with Cattelan’s work to differentiate it from, say, a Robert Gober. After the show opened, I received an email from a very savvy artist and writer friend who missed seeing several pieces in the show was highly irritated by the insider-y, scavenger hunt nature of the exhibition. No doubt, the best way to see the exhibition is to simply explore the whole museum with an open mind, receptive to whatever you encounter. But that is pretty idealistic, especially in the case of frequent visitors who, already familiar with the museum, are coming to see Cattelan and leave.

The main problem with the show is the struggle between works as actors in the museum and works as objects unto themselves. Sometimes an artwork’s effect is enhanced and amplified by its context, but other times, all the other things around it are just distracting. When the placement is successful, it seems effortless. When it’s not, it feels contrived and unnecessary. 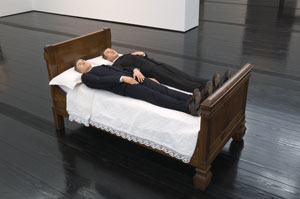 In a fairly creepy 2010 Cattelan work, two exacting and diminutive wax figures of the artist, one in a black suit and one in blue suit, lie side by side in an antique child’s bed. They both stare up at the sky, or more specifically a bottle that’s been painted sky blue with fluffy white clouds and placed high on a shelf: Magritte’s La courbure de l’univers (The Curvature of the Universe), (1950). A George Segal plaster figure of a woman sits in a chair in corner as if waiting for them to waken. In the same room, Cattelan’s untitled 2009 work, a canvas propped up by a broom handle, is as sly as the smile onthe 1963 Warhol Double Mona Lisa, opposite it.

At the other end of the museum, in a gallery all their own, nine sheet-draped bodies lie in a row. Each is convincingly carved from marble (Cattelan has fabricators execute his sculptures and the guys who knock off Davids do great work). All, (2007) is moving and solemn. It conjures news images of war, disasters, terrorist attacks, seeing what used to be people with lives and families transformed into inanimate, anonymous, fabric-covered lumps. 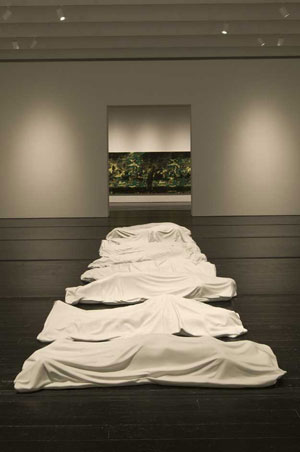 All is a striking piece and deservedly has its own room. And really, I wish it was far more isolated. Cattelan has filled the surrounding galleries with work by artists he likes. Walking past the draped felt work of Robert Morris, a hanging printed fabric piece by Robert Rauschenberg and a long ridge of neon and fiberglass by Bruce Nauman, I saw material and formal associations but they didn’t add anything to Cattelan’s work. There was too much stuff and the nature of All made these art games seem trivial and forced. A Warhol camouflage “Last Supper,” visible in the other adjoining gallery, had a decidedly stronger conceptual tie-in but I still found it distracting. That gallery would have worked better with All if its contents were reduced to just The Halo, (1985) James Lee Byars’ simple, massive gilded ring.

I have always liked Cattelan’s work and I imagine that the project was a lot of fun for the artist and the curator. There is something appealingly subversive about sneaking work into the permanent collection. In many cases it was incredibly effective; but it became somewhat tedious after awhile, and I found myself just wanting to see some pieces on their own, in a traditional solo show. Winnowing down the insertions into the collection and then giving the artist a bit of space all to himself might have been a better solution. “Where’s Waldo” gets old after a while.

Kelly Klaasmeyer is the editor of Glasstire.

Having artists curate a show is a fecund idea. Having them curate their own work seems risky at best. Interestingly, the New Museum just closed their “Skin Fruit” show where Jeff Koons meticulously weaved works and space even sounds. There was another edition of “All” at this show and it was paired with Tino Sehgal’s “This is Propaganda.” I have a video clip, but there are strict restrictions on ‘showing’ Sehgal’s work. Basically when you walked by All, there was a ‘guard’ who would sign “This is Propaganda.” The effect was striking! And there was a lot of Gober on the same floor. Another MC work, “Now” (a coffin with a JFK likeness) was interconnected with the noise from the museum’s machine room. Visit after visit I found more and more nuances in Jeff Koon’s curatorial work. An artist would be limited to achieve this with his own work.