by Kelly Klaasmeyer May 25, 2010
FacebookTwitterEmail 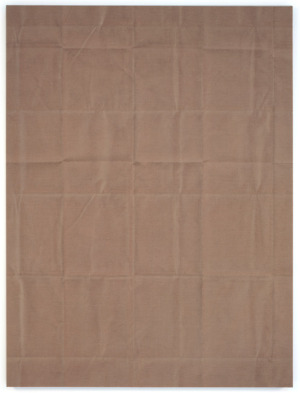 “Bless Their Hearts” visited New York a couple weeks ago and checked out some shows.

The 2010 Whitney Biennial closes at the end of the month. Texas artists may be asking why none of you are included in this year’s show. I’ll tell you why. It’s ‘cause none of y’all had any work that sucked enough.

Really. Okay, well, not really, there were some good pieces scattered around but NOT many and while it was pleasantly uncrowded, (in terms of both work and visitors) there was still way too much crappy painting. There was an entire room of painting that looked like it was from some museum
education program showcasing the work of talented high school seniors. I’m serious. I’m all for enthusiastically, intentionally bad painting, but mediocre
painting? 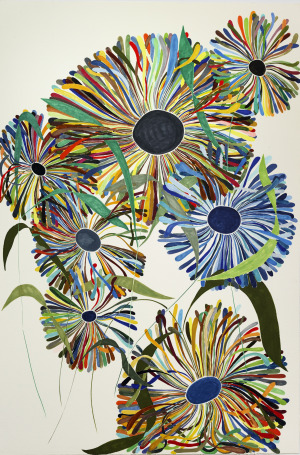 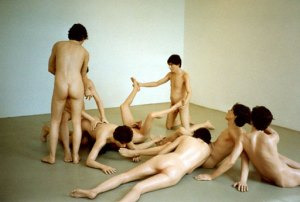 Some of the most successful works involved video and photojournalistic photography. Possibly the strongest piece in the show, Bruce High
Quality Foundation’s video projection on the screen of a hearse was powerful and poignant. The video paired clips from recent U.S. history with a voiceover narrative describing our relation to “America” in terms of a series of dysfunctional relationships.

Katie Gilmore’s video was pretty nice. It showed the artist trying to kick her way out of a claustrophobic sheetrocked chamber while ridiculously clad in a polka dot dress and high heels. The video was shot from above and is shown next to the damaged sheetrock structure that housed the performance.

Nina Berman’s back-home shots of a marine horrible disfigured in Iraq by a suicide bomber were heart wrenching. Even more tragic were Stephanie Sinclair’s images of women at a rudimentary Afghan burn clinic. Victims of abusive husbands, the women set themselves on fire in acts of desperation.

There are were some other decent works in the Biennial but, really, you could have put together a far more interesting show without leaving the Houston city limits. 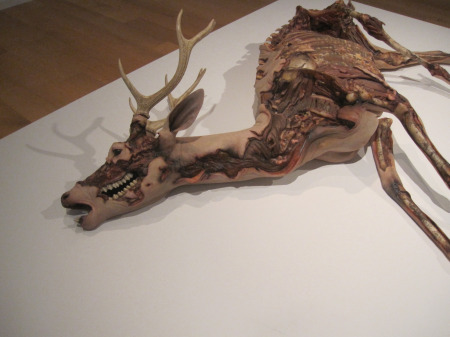 I caught the last day of Dallas artist Erick Swenson’s show at James Cohan Gallery. He was showing some earlier deer-centric works with a new piece, Ne Plus Ultra, 2010, a fantastically detailed rotting deer carcass whose revealed bones bore scrimshaw cartography. Swenson’s wonderfully talented but in this most recent piece it feels like he’s getting lost in his formidable technical skills. The thing itself wasn’t as interesting as the fact that he could make it look so real. It really, really did look like there was a rotting deer carcass lying in a Chelsea gallery. But I still have a soft spot for kookier early Swenson pieces like his untitled 1998 work featuring polar explorer baboons in matching denim snowsuits. 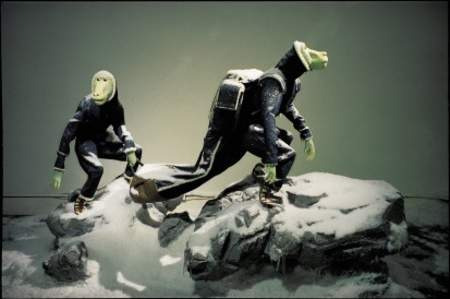 Marina Abramović’s performance retrospective at MoMA was way more interesting than I could have imagined. Having only seen bits and pieces of her work in other shows or in reproduction it was pretty incredible to see all the video of past performances, recreations of them as well as the artist’s current performance, “The Artist is Present.” Abramović was there, midway through her approximately 600-hour endurance piece, sitting in a chair and staring at whatever member of the public had chosen to sit opposite her. The person can sit for as long as they choose to. The intensity of Abramović’s focus is pretty incredible, her time in Tibetan Buddhist monasteries no doubt coming into play.

The reenacted performances with naked people, including two naked girls you could walk between and a naked guy lying down with a skeleton on top of him, guaranteed that the show was packed and certainly livened up all the photos and videos but it didn’t have much to do with the work itself. Paying someone an hourly wage to stand or lie naked or perch naked on the wall as if crucified is a whole lot different than the artist out of whose psyche the idea came doing the performing.

Abramović’s work seems to me to be an intensely personal exploration. She disavows any feminist agendas in her work although it certain lends itself to feminist interpretation. The elements of self-mutilation, control, suffering and stoicism can also be interpreted as larger societal commentaries. But where does the impetus to stab yourself in the hand, to sit naked and passive, allowing gallery visitors to use an array of painful objects on you, come from? There is something dark and personal that inspired these acts. I don’t think you just start making that kind of work solely as an intellectual exercise. 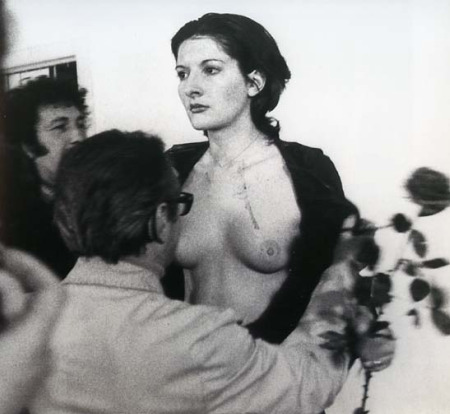 I’m always interested in biography, even though it’s all-too-often used to spin or market an artist’s work. The experiences that led a particular artist to make a particular kind of work are fascinating. As far as I can tell, Abramović has never really given any details other than hinting at parental violence and a militarily controlling mother who wouldn’t let her be out past 10 pm until she was 29. Abramović is Serbian and her parents were both lauded partisan war heroes and communist party apparatchiks, something that would have likely given the family significant privileges and definitely would have given the artist plenty to rebel against. I asked a Bosnian friend if she had any ex-Yugoslavia insights she could offer.

“Who from that part of the world is normal?” she replied.

The Whitney Biennial Is More Radical Than It...

As a two time Whitney Biennial alum, I am ever more discouraged and dispirited by the lack of any curatorial vision and leadership from the Whitney Museum. My work was included in the 1975 Biennial curated by Marcia Tucker. She actually visited studios [mine was in Albuquerque, NM at that time]…..she look at real art in real studios and talked to real artists……what a fresh concept. The second Biennial to include my work was in 1981…painters in that show included Willem DeKooning, Wayne Thiebaud, Julian Schnabel and many others…..what an event for me and to see a range of quality work by a wide range of painters…..In recent years I have not even been able to find anybody at the Museum to show work to nor to talk with. I have sent portfolios with not even an acknowledgement of receipt.

I really really miss the “old” Whitney when it was actually committed to American art and to finding that quality work from across the whole country.

the Tauba Auerbach pieces were among my favorites