by Ayanna Jolivet Mccloud May 20, 2010
FacebookTwitterEmail 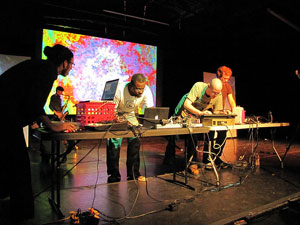 Pulsating sounds, single and multi-channel videos, moving
lights, dance and live music were all part of the one-night-only May 1 event, Projected.2010:
New Visions of Sound and Light at Frenetic
Theater. Curated by Chris Nelson, Frenetic Theater’s artist-in-residence, the
ten-plus multimedia performances, installations and videos engulfed the
audience in a sensory overload that would be almost unachievable in a
traditional visual arts space.

Organized with the intention of blurring the lines between fine arts, performance and cinema, Nelson
used the theater as a platform for filmmakers and lighting designers, musicians
and dancers to develop new works and new collaborations. Outside of any visual arts
definition of video art and sound art, Projected.2010 could be seen
more as an extension of the field of expanded cinema. Nelson stated in the
press release that it was his intention “…to take art video out of the gallery
and documentary video off of the computer screen, and provide a space for a
projected ‘jam session’ where new ideas can develop.”

An ambitious attempt, it was at times overwhelming; you
couldn’t help but feel that something was bound to get lost in the
multi-sensory extravaganza Nelson dished out. With work and performances from
Hillerbrand + Magsamen, Robert Thoth, Architects of Cinema, Tierney Malone,
Spectrosonique, Matt Crawford & Che’ Rickman, Alex Luster, Stick ‘Em Up,
John Carrithers and David Wolcott Wilhelm, Projected.2010 featured artists with decidedly diverse approaches
to the projection of sound and light. 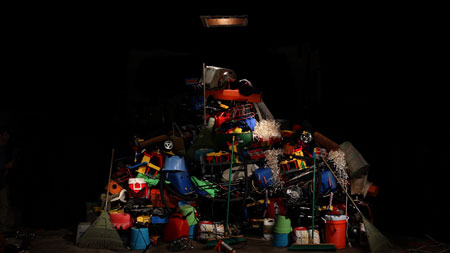 Still from Accumulation by Hilldebrand + Magsamen

Accumulation by Hilldebrand + Magsamen was a slow,
stretched out video of a child dangling down from an opening in the ceiling
into what looked like a basement room. There were also shots where we simply
saw the room with the opening in the ceiling (no child) and a large pile of
random junk. There was this looming music that perfectly complemented the
images of the video and created a somber mood. While it was a very
straightforward use of projection and did not involve the live element found in
most of the other works, it was simple, mysterious and one of the strongest
works in the show. 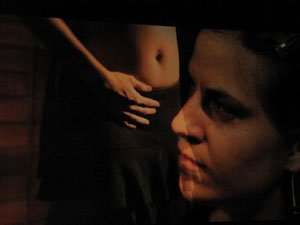 The Architects of Cinema, a multidisciplinary
improvisational trio, married sound, visuals and live performance. The group
featured Sandy Ewen’s guitar combined with Y. E. Torres’s belly dancing and
projections of Chris Nelson’s abstracted video footage. Together, they
successfully created a saturated experience in which each medium reacted with
the other. Yet there were moments when the scale and dominance of the video,
which was incredibly luscious and forced us to slow down through its screwed-down
aesthetic, overshadowed Sandy Ewen’s precarious tinkerings and sound explorations
with guitar and various found and constructed tools. One of the most subtle and
striking moments of the night was the dialogue between the sounds of Ewen’s
guitar and the movements of Torres, whose has developed her own unique and
experimental approach to belly dance. Nelson’s video only amplified the
experience.


Together.We are Instruments (TWAI), a group of four guys,
performed live, standing over a long table filled with laptops and all sorts of
electronics they used to create separate and occasional synergized digital
sounds. A projected color video added a psychedelic feel. The recorded
statement “Individually we are separate but together we are instruments” was
occasionally repeated. Like many of the performances in Projected.2010, TWAI located technology as a vital medium in art—there
were moments when the piece got a little muddy and other moments where this
chaos worked to the advantage of the sound making.

Robert Thoth’s approach to chiptune music inserted a
seemingly random, but playful moment into the evening. A video featuring game
graphics with the text of song lyrics was projected karaoke-style behind Thoth
while he crooned the words. 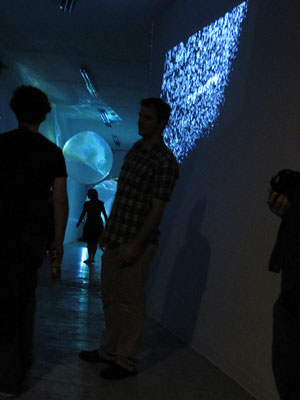 Incorporating live music via saxophonist Cory Wilson,
Tierney Malone’s Third Ward is my Harlem featured a projected digital slide
show of Malone’s rich, often jazz-inspired, paintings involving text and found
image. While it is preferable to see Malone’s paintings in person to experience
the size, texture and juxtapositions, this video of his work brought to life
and gave voice to Third Ward cultural gems like Kenny Abair, Israel McCloud and
Jabari Azi-Ra.

Projected.2010 seemed
to be about amping things up and activating the audience in new ways. This
interactivity could be seen in the last piece in which a light painting was
created around the audience and simultaneously projected onto the large video
screen on the stage. These enhanced levels of interactivity seemed to be the
focus of the show. This was also evident in the hallway installations that
transformed those spaces into an ethereal, otherworldly, interactive
atmosphere.

By interweaving unlikely collaborations for Projected.2010, curator Chris Nelson, a video artist, presented his
take on what art is and how it is presented and experienced.  Moving beyond the typical art space, Projected.2010 alternately felt like you were at a club, a cabaret,
or a rave. By taking these art forms out of their typical contexts, Nelson
carved out new spaces and developed new platforms for presenting multimedia
art.

Ayanna Jolivet Mccloud is an artist, writer and a curator.
She has participated in exhibitions and residencies throughout the U.S., the
Caribbean and South America. Her creative practice draws attention to the
precarious, ephemeral and soulful. She is currently based in Houston, Texas,
where she runs labotanica.