Well, how did I get here?: Jennifer & Kevin McCoy

Presently, I am having the above awakening. It’s as though I aged from 14 to 40 in a flash, and all the memories in between were accidentally deleted from my hard drive. How did I get here? What am I expected to do? Whose house is this, and most importantly, who are these people in the house? They’re freaking me out.

It’s often assumed that artists are exempt from the social realities of adulthood, jobs, parenthood, finances, and civic duty. Not so. Increasingly, artists are grappling with the challenge of being creative persons with unavoidably uncreative roles within society. Few well-known Western artists have escaped dependence on civilization and the rules of participation. (Even Gauguin failed in his attempt to escape Europe for the perceived Utopia of Polynesia, where he ultimately found that societal laws applied there too– he died just prior to serving a three month prison sentence for breaking local ordinances.) 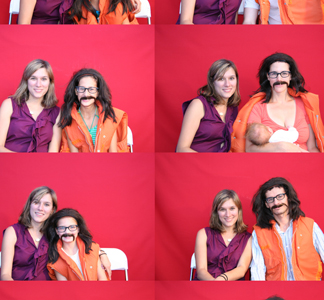 Titled “Co-Existing and Co-Llaborating” and curated by Mary Magsamen of Aurora Picture Show (the organization I started), a Fotofest screening of artist-made video will broach this subject and others, under the umbrella of “artists who are partners and collaborators.” (The screening is derived from an exhibit of the same name that Magsamen curated for SPACES, a non-profit art space in Cleveland, Ohio, in Winter 2010.) Artists in the exhibit include Jennifer and Kevin McCoy, Darrin Martin and Jamil Hellu, Potter Belmar Labs, Duke and Battersby, Voshardt and Humphries and Dana and Travis Hanmer.

Two of the best known artists of the collaborative partners genre are Jennifer and Kevin McCoy, who will be featured and in attendance at the screening (along with San Antonio-based Potter-Belmar Labs). The McCoys are a husband and wife duo, who make art together, children, and meaning.

The work by “The McCoys” which is presented in this screening is titled, I’ll Replace You (2008), described below.

This film is an experiment in outsourcing everyday life. In it we hired
50 actors to take over all aspects of our daily routines and roles as
parents, spouses, professors, artists and friends. The actors play
opposite their real counterparts – our kids, our students, our friends,
in our studio, presenting our work.–The McCoys

The following q and a took place by email over the weekend of March 26.

Andrea Grover: For I’ll Replace You (2008), you hired 50 actors to play domestic and professional roles within your real lives, in essence, as stand-ins for your family. Tell me more about the genesis of this project.

The McCoys: This project stemmed from two separate threads: one from our work, and one from our lives. The first, learned from our work with genre, was the sense that life can be communicated and understood as a series of media constructions. In dealing with actors and improvisation, we weren’t dealing with specific characters (or even the two of us seen as characters) but rather an idea that the actor could encapsulate and perform as a very generic type of “husband” or “artist” or especially, “parent”. The second thread was our sense that we were (are) completely overwhelmed most of the time. Our multiple interests had at some point all taken on lives of their own and become multiple responsibilities. This leads to the disturbing feeling that one is just going through the motions and could easily be replaced by almost anyone. Certainly, by hiring an artists’ assistant, a teaching assistant, or a babysitter, this replacement plays out concretely in many peoples’ lives. The video was a way to test this idea.

AG: Did the actors perform entire days or just scenes from your lives?

MCs: They performed scenes that were then highly edited to cycle through as many faces and voices as possible.

AG: You’ve been working together for 20 years. How has the subject of your work evolved as your relationship evolved?

MCs: There is a certain sense in which our subject has really been the same the whole time but we have explored it through different media and directions. Funnily enough, this is interesting only because the world keeps changing. We have certainly made our work more personal and the idea of our collaboration has
become more central, but to say the work is autobiographical is also missing the point. The main subject of our inquiry has to do with how cultural production creates patterns of order in our thoughts and how these structures influence the stories that are told. 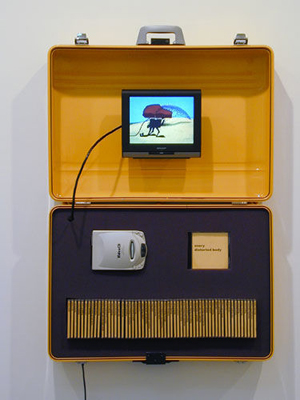 AG: Some of your earlier work, like Every Anvil (2001), which breaks down shot by shot 100 episodes
of Looney Toons cartoons and catalogs
the shot according to violence and physical extremism, and Every Shot, Every Episode (2001), a collection of
10,000 shots from the Starsky and Hutch
T.V. series arranged by descriptive
category, presented a kind of interactive cinema, where viewers could choose from a database of video– a kind of collaboration with the audience. Does the social web and the potential for networked collaboration interest you?

MCs: Our version of interactive projects were involved in the creation of an archive. These projects also come from the idea that, in the electronic arts, there are artist-designed tools. The idea of networked collaborations is definitely happening, but we are happier to focus on our collaboration. Also, ten years ago we were very much involved in internet-based projects and at a certain point chose to change directions. That colors our actions today.

AG: I’m working on a database of artists’ boat projects, and noticed your High Seas (2007) mixed media sculpture of The Titanic with live video output. I’d like to know more about this work. 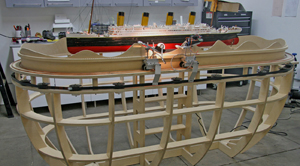 MCs: This project was a commission from the Addison Museum of Art who created an exhibition in which they challenged artists to work with their stunning collection of model boats. Part of our work has been (and the new work will be) projects that create a special effect in real space and time. Our intervention was to create a sculptural track around the existing model. A camera moves along the track following an up-and-down wave pattern. This effectively creates an animated image of a static, historical, object.

AG: What will you be doing while in Houston?

MCs: We hope to see as much art as we can!

Meet The McCoys at the screening of “Co-Existing and Co-Llaborating” on Tuesday, March 30, 2010, 7pm at Molly Gochman’s Studio, 2442 Bartlett, Houston, Texas.