“Leaps into the Void: Documents of Nouveau Realist Performance” at
the
Menil Collection is a show you won’t see anywhere else in Texas, or most of the U.S. for
that matter. There just isn’t a collection with the same quirky focus on rare moments in the French avant-garde elsewhere in this country.

The show’s objects, almost all from the Menil’s own collection,
document the brief but important Nouveau Réalisme movement in France in
the 1960s. It involved the artists Yves Klein, Niki de Saint Phalle,
Jean Tinguely, Martial Raysse, Christo, Mimmo
Rotella and Arman, among others. This
movement roughly corresponds to Fluxus (and to a lesser extent,
Pop) in the U.S., and its most iconic performance is Klein’s Le saut dans le vide (The Leap into the
Void): 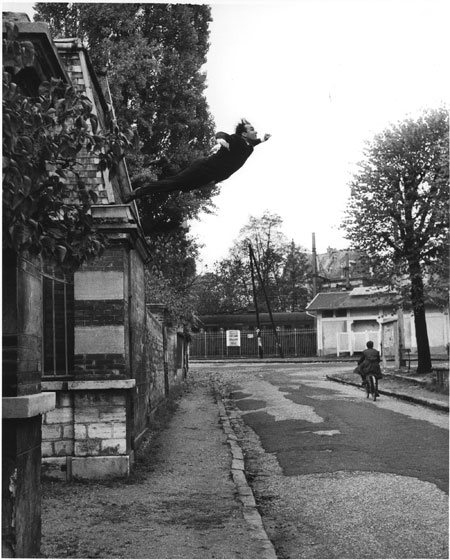 Not only does the Menil have
original photographs of The Leap, they have a surprising 4 copies
of Klein’s one-day newspaper Dimanche, on
view, as well as an actual roofing tile from the building in Fontenay-Aux Roses from which Klein flung his body. Dominique de Menil herself
went to collect the tile, pilgrimage-style, and it remains in her museum’s
collection wrapped in the original paper napkin with her notes written
on it. According to the show’s curator Michelle White, this tile was the initial inspiration for the show.

Though
Klein’s is the most recognizable work in the small, 2-gallery exhibit, there are also wonderful objects by Jean Tinguely and Niki de Saint Phalle. The large monstrous sculpture below is mechanical: its arms move and its mouth opens when the wheel turns, revealing a knife in its lower jaw. 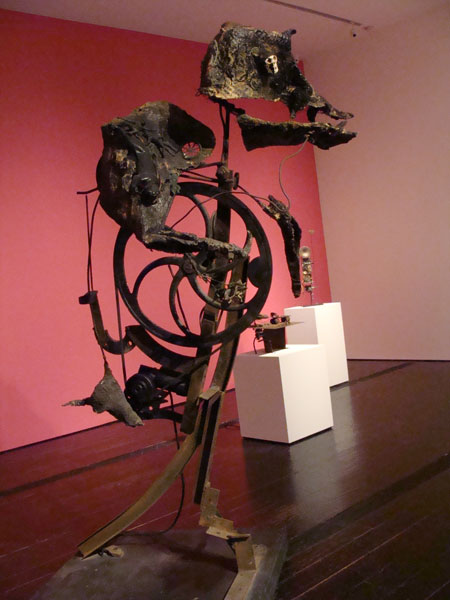 The antenna with the feather on Tinguely’s kinetic sculpture below moves back and forth, picking up any radio frequencies in the air. White says the sound is similar to an FM radio when you move dial dial quickly up and down: bits of static, bits of voices, snatches of songs. 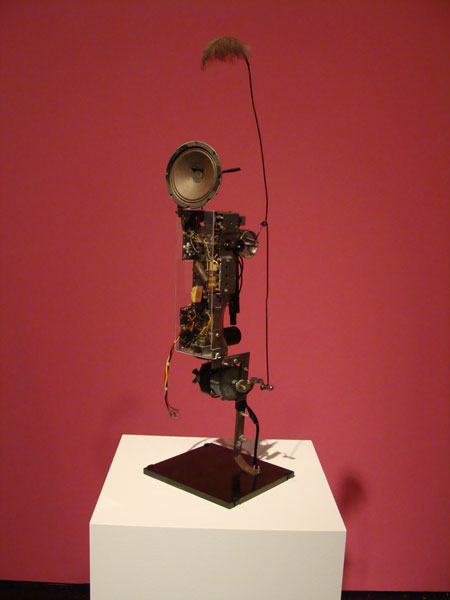 These are some of the more obscure sculptures in the Menil’s collection,
and they haven’t been on view in years. All the mechanical objects will be run sequentially for 30 seconds on the hour, every hour, from 12 – 6 pm for the run
of the show.

In addition to these sculptures, there’s a video of Niki de Saint Phalle’s shooting performance in Malibu from 1962, which is groovy beyond words: the former model, looking like a Bond girl in a skintight white jumpsuit, takes aim at a white wall of objects, each of which is filled with a different color of paint. There are also a couple of splattered objects on view from other of her shooting-as-painting performances. 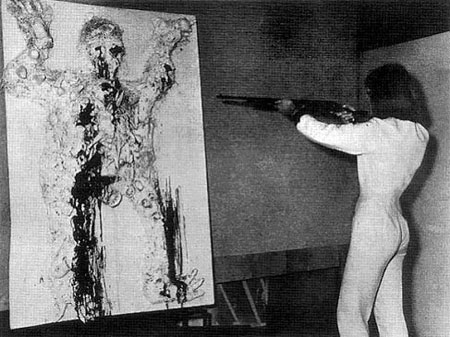 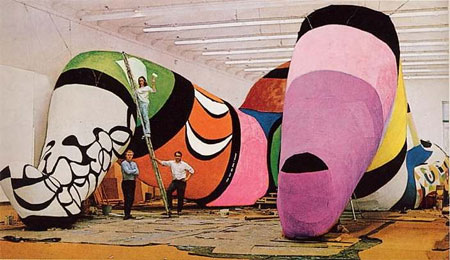 Per Olof Ultvedt, Niki de Saint Phalle and Jean Tinguely in front of “Hon” Moderna Museet, Stockholm, summer 1966 [Internet photo]
On the heels of last year’s enjoyable “Body in Fragments,” “Leaps into the Void” is another small gem of a show that showcases an interesting facet of the Menil’s wonderfully idiosyncratic collection, and also illuminates a somewhat obscure moment in art history.  It’s on view March 19 – August 8, 2010.

[FYI, here are some public programs associated with the show]

Sunday, March 21, 2010, 7:30
p.m.
Outdoor Film Screening
Yves Klein, la révolution
bleue (France, 2006) Directed by
François Lévy‐Kuentz Category : Documentary. France/2006/Betacam/colour,
b&w/52 min/French
Lévy‐Kuentz’ “documentary
fiction” is a remarkable introduction to abstract art through one of its
most
influential personalities. Yves Klein’s career lasted only eight years,
from
1954 to 1962, but he managed to shake the foundations of modern art.
This
portrait, featuring unreleased archival material (including Klein’s own
films),
examines the artist’s meteoric career and the mysterious correlations
running
through his work. Co‐sponsored by the Consulate General of France in
Houston
and the Texan‐French Alliance for the Arts.

Say it ain’t so! Just in case that the small possibility exists that anyone would believe to the contrary, the iconic Klein image of “The Leap into the Void” is a photomontage and never happened. This is well known. Klein certainly leapt from something onto something and these leaps were photographed, but the actual thing as suggested by the famous image never occurred as portrayed. That’s why there are no photographs of Klein’s “The Landing onto a Solid Mass.” Now, about the Tooth Fairy…
http://www.metmuseum.org/toah/hd/bola/ho_1992.5112.htm