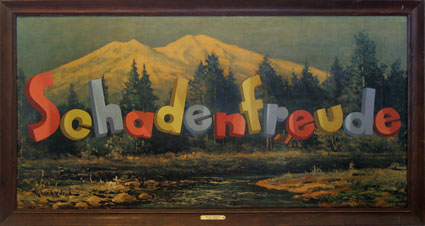 Gallery director Marty Walker described how the opening-night crowd at Wayne White’s show I Fell 37 Miles to Earth 100 Years Ago queued up like airport ticket holders below those big arrival/departure monitors. They stared silently upwards at the text White painted over top of 20 kitschy, framed lithographs—some of them moving their lips as they read.

There’s much one could read into the works. And we do like to read into things, don’t we? For instance, we might see White’s text as a direct response to the found images themselves, a response addressing themes larger than those we might normally expect such thrift-store decor to bear. 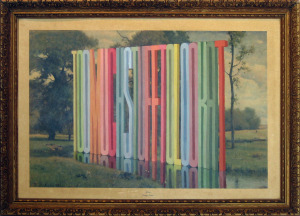 Is it possible that, because Too Much Stuff to Look At (2010) has starting position on the main wall of the gallery, this may be White telling us up front that the work we are about to peruse is one big snuggly-blanket condemnation of contemporary art in all its inscrutability? After all, the six words he’s applied here with acrylic and brush are so compressed, kerned and crammed as to be nearly indecipherable.

Or, could it be that the maiden with kitten in I Was an Angry Young Man (2010) is White’s stake in the ground; the final exclamation point in the war between the blue and the pink; his break with the rigid gender roles of a rural Tennessee background and the emancipation proclamation of his inner girlie girl?

Maybe. Maybe not. Sometimes an exploding cigar is just an exploding cigar, and while it’s hard to look at these puzzling juxtapositions and accept that the artist may merely be having fun, remember whom we’re talking about here. 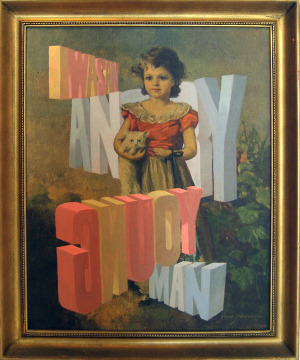 Wayne White is the creator of the giant, snoring George Jones head in last year’s Big Lectric Fan to Keep Me Cool While I Sleep at Rice Gallery in Houston, and long before that, the voice of Mr. Kite and bully-puppet Randy on the only slightly creepy Peewee’s Playhouse , a Saturday-morning children’s television show from the ‘80s.

Of course, the best art remains open to personal interpretation, and I doubt White would want to stop you from looking for some other, more earth shaking interpretations of his work on your own time. You may read him as exploring the loss of innocence in LSD and That is That (both 2010), bemoaning global climate change in Funny Sad Funny, UH and DUH (all 2010) or raging against the political machine in What’d I Tell Ya? (2009).

But if you take it all too seriously, I’m thinking he may simply mock you with the Cartoon Carnival-like, fun-house lettering of Schadenfreude (2010) and gleefully rub your nose in your own pain.

James Michael
Starr is an assemblage and collage artist who lives in Dallas. He
is represented there by Conduit Gallery and in Houston by Hooks-Epstein
Galleries.

Gardar Eide Einarsson at the Modern