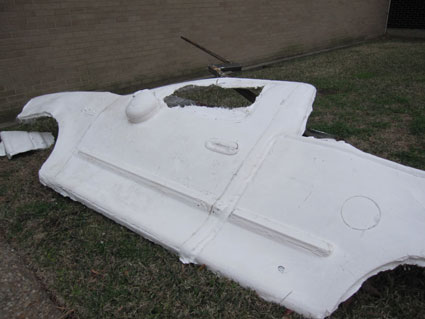 This Saturday, March 13th, is the last day for the University of Houston student show at the Blaffer Gallery. It’s worth running by to see what the youth are up to.

Setting the show’s anything-goes-tone, Jack Eriksson’s cracked cast of the driver’s side of a Ford F-150 was plopped beside the sidewalk leading up to the Blaffer. It made for a very Texas blend of ambition and absurdity.

Sarah Jones’s Everything I Made in Undergrad is, apparently, just that. It’s a pretty witty idea and the solution to the dilemma of many graduating art majors. What do I do with all this crap? Jones used it to create a giant teepee. (Actually I think it’s supposed to be spelled tipi now.) 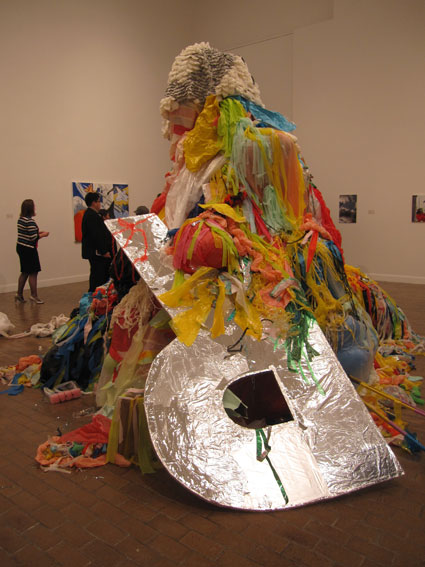 Sarah Jones – Everything I Made in Undergrad

It’s wonderfully silly and over-the-top, the metal frame is piled with a lot of stuff, mainly mounds of things made out of pastel colored chiffon and plastic. You can even crawl inside it, which every kid unwillingly dragged to the exhibition promptly did. I wouldn’t be surprised if Bill Arning, exceedingly tall director of the CAMH and all around good sport, did as well.

Arning was also checking out Natali Leduc’s the bookatron: the origin of rain, a giant Rube Goldberg-style flip book that involves pedaling. I think it’s pretty great that the CAMH’s director is always out there looking at all kinds of work, even student work. 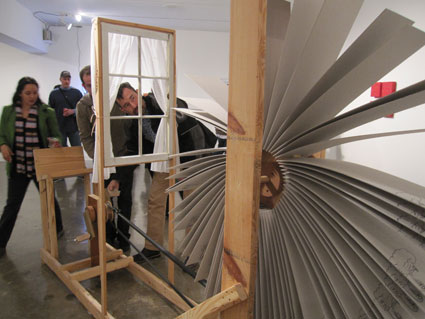 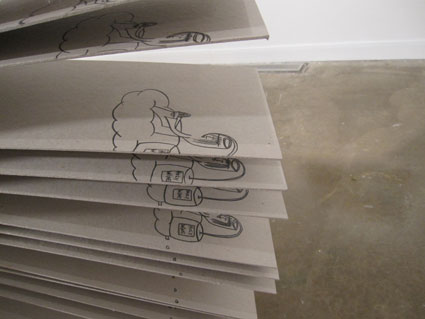 Jone’s crap tent may have been engagingly silly, but Anne Katrosh’s piece is downright ridiculous. The red wax that encases cheese? Katrosh figured out a use for it, covering some small square canvases to create “encaustic” works entitled Encaustic 6 (LA VACHE QUI RIT), after the Laughing Cow cheese brand. (You know, those really annoying commercials where a woman foists cheese on passersby?) The “paintings” aren’t exactly successful, but they are pretty funny. It might have worked a little better if she just did one massive canvas. 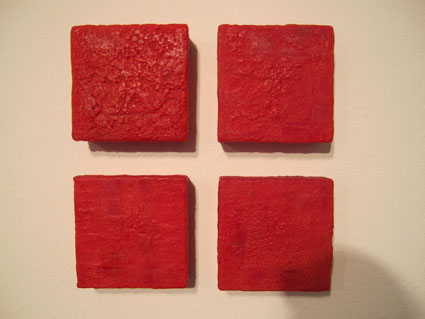 There is always one kid in every painting class with amazing rendering skills but, unfortunately, they don’t always make interesting work. Travis Garner is an exception. His painting of a dazed-looking woman in a towel sitting on the lid of a toilet is precisely painted but just strange enough. 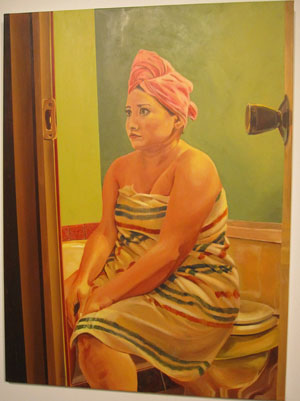 Travis Garner, Eyes Glazed at the Thought of the Next Day

I’m sure if the layered text in Steven Hook’s paintings is supposed to be raunchy, profound or absurd but I like it. I’m not interested in puzzling out the content, but the roughly printed letters and the muddy pastel tones are work amazingly well together. 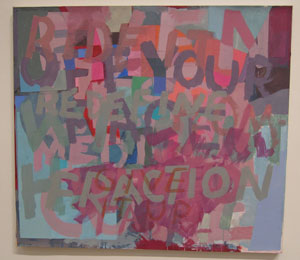 In the photography zone, Mauricio Lazo did a wonderful job with his giant loterìa deck. Lazo photographed real-life subjects, arranging objects or costuming people as loterìa images to create a pretty witty piece. 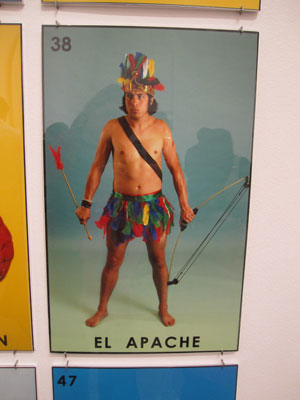 Britt Ragsdale, coming off a great installation at Lawndale, contributes the video Landschaffen. In it, a miniature treed landscape seems alive, the ground moving up and down as if it the earth itself is breathing. It manages to be ominous and whimsical at the same time. 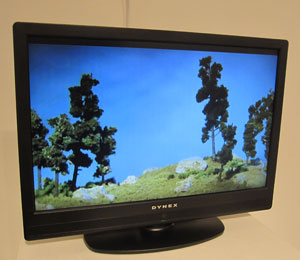 The senior block and graduate painting studios were also open to the public the night of the student show opening. I wandered past one studio and immediately did a double take. Propped against the back wall was the biggest, most obnoxious painting I have ever seen, really. And I mean that in a good way. I said as much to the artist who, after a pause, identified himself as Kevin Reilly. (He apparently uses several names.) He gleefully informed me that it wasn’t done yet and it was going to get even worse.

What the hell else can you add to a painting with a half-naked tattooed bartender, a completely naked kneeling woman, two leopards, some raw meat and a full bar? A Scarface-sized pile of coke? 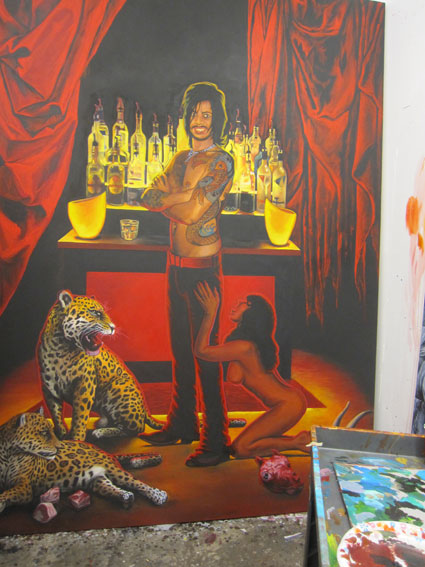 Occupy This! The Art of Social Protest Friday...