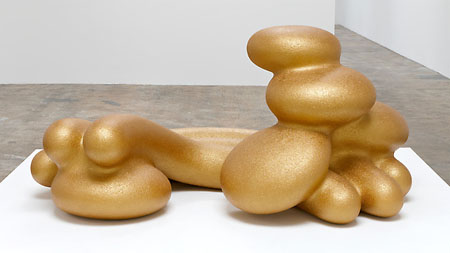 The Sunday edition of the NYTimes featured an article on Ken Price titled “The Blobs Aren’t Talking ,” by Nick Stillman. While I am happy to see such a worthy artist get the spotlight, the article read more like a Wikipedia survey. The primary contributions by Mr. Stillman’s (beyond good gathering of facts) were his perplexity about the work not having explicit “meaning.” Even the highlighted quote of the article states, “Ken Price may be having his moment, but don’t ask what his alluring sculptures mean.” Also, “When it comes to discussing what these oddball shapes might mean, Mr. Price is notoriously elusive.”
Would you ask that question about any work of art? To pretend art is simply a vehicle for some message reduces viewers into passive recipients rather than active experiencers. We don’t view artwork for knowledge, but rather experience. I am frankly surprised that this “lack of topicality” became the central theme when highlighting Ken Price’s career. While survey’s can be useful, I would have preferred an attempt to unpack why these quirky visual forms are so enigmatic and attractive.
I enjoyed the article overall, but can’t stand it when writers act like “meaning” should be something more concrete and readily accessible.
UPDATE: Perhaps this theme was just a “hook” for general audiences, a (very) subtle introduction to abstraction? I can’t tell …

Did you see the show’s blurb in the New Yorker? “Quietly, over half a century, Price has become the most captivating sculptor in the world.”

This has got to be Schjeldahl. Only he could write something so goofy. It goes on: “[Price’s works] evoke Brancusi-like ideality and exercise Calder-like charm while remaining forthrightly objective… Seen from farther away, they organize the world like Wallace Steven’s jar in Tennessee.”

So take your pick between banality in the Times, and the kind of silliness only an English major could love in the NYer.

even on a good day in a good meadow, meaning is a bad rider

Ken Price is infringing my copyright and refuse to cease; check it out! I reveal the infringement before the 2012 wilful retrospective of infringing objects at LAMCA and the Metropolitan; http://www.infringedcopyright.com/compare-similarity