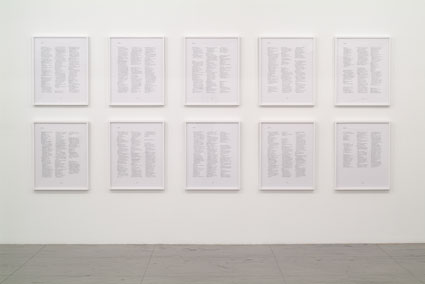 Using text in art can be tricky. Visual artists are usually more concerned about the way letters look than what they might mean when lumped together. Alejandro Cesarco goes beyond the appearance of typography to tap into the emotional and even romantic qualities of writing, though without actually having to write a book. What he gives us instead are the indexes to books he hasn’t “yet written and most probably never will.” His exhibition at Artpace, Alejandro Cesarco, is the artist’s first solo museum show and includes the video Two Stories, which is, in effect, a story within a story within a story.

A native of Uruguay, the 35-year-old artist currently lives in New York, where he directs the non-profit Art Resources Transfer and edits the organization’s series of conversation-based books, Between Artists. Text triumphs over images in Cesarco’s minimalist exhibit, which consists of large, individually framed c-prints of index pages in the otherwise bare Hudson (Show)Room. Though not much to look at, once you start to read, the indexes conjure rich panoply of feelings and associations.

Index A-Z (2000) is a series of 12 index pages that function as a kind of self-portrait, as if the imagined book is the autobiography of the young artist related through his influences and intellectual development. So, for example, in the “B”s, you find French literary theorist Roland Barthes and German-Jewish Marxist philosopher-sociologist Walter Benjamin alongside the Beatles, David Bowie and Jacques Brel. Depending on your own reading and influences, the references can send you skittering through a wide range of memories, from squirming through a graduate seminar to the first time you heard a favorite pop tune on the radio. Then, you begin to wonder about people not listed in the index. David Lynch deserves a mention, but not George Lucas? Though the entries are a who’s who of modern and contemporary artists and philosophers, the names and references also serve as a chart of who’s cool and who’s not within this artist’s well-connected universe.

Index (A Novel) (2003) not only references an unwritten book; it’s meant as a guide to a work of fiction, which generally comes without an index. With fewer names, the entries tend more toward the emotionally suggestive, such as “chocolates,” “cigarettes,” “compassion,” “consoling,” “crying” and “cuddle” in the Cs. However, the notations provide a glimpse of the ups and downs, the soaring highs and embarrassing lows, of the stereotyped plotlines of a typical love story. Of the three unwritten books in Cesarco’s oeuvre, this would probably be the most readable.

The longest and driest work, Index (A Reading) (2008), is more academic and less personal. Intended as an exploration of what makes up an index and how it relates to research and scholarship, this index serves up the most notations for references to reading, writing, history, memory and forgetting. Researchers often start off with a book’s index and those topics listed in the index usually determine what gets mentioned in subsequent references to the original work. Cesarco uses subheadings and cross-references to flesh out a narrative of intellectual development, but it also reveals that scholarly research can be like the children’s game of Telephone, where what is said originally goes through many transformations in the telling. 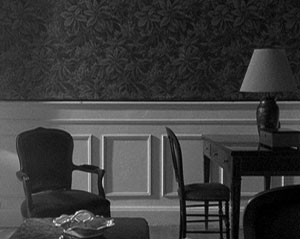 The moody, melancholic video The Two Stories is a slow pan through an elegant sitting room devoid of people. The walls are covered with ornate wallpaper and a Greek statue of a man stands outside the window of the mansion. Filmed in black and white, the video features an unseen, monotone narrator reading a text by Uruguayan author Felisberto Hernández in Spanish. The English subtitles and uncertain wavering of the camera as it trolls through the deserted room make this feel like some long lost film clip from the French New Wave of the 1960s. The narrator is describing his feelings about a public reading he is giving of a short story that involves suicide. He’s nervous. He fidgets. He’s bored. He’s distracted by the statue outside the window. Nonetheless, his story connects with his listeners; the narrator reveals that an audience member is inspired to approach him with yet another story of suicide. The narrator remarks that this makes him feel as if the statue outside the window has suddenly come alive and started “slapping at the pigeons.” Two Stories is about the self-consciousness the narrator is experiencing in the space between the two narratives.

Text is a problem for artists because a word can never be stripped of its meaning and admired solely for its graphic lines. Cesarco doesn’t pretend to be interested in the aesthetic qualities of pure text; instead, he uses language as intended, to tell stories and convey meaning. But his Indexes are more like cognitive maps, full of influences and associations that reveal the complex connections that bind and drive our civilization, while also, occasionally, tapping into more personal emotions.

“Reclaimed: Paintings from the Collection of Jacques Goudstikker” at the McNay

Thank you for sharing this valuable information. Right now I’m busy with my project web site development and search engine optimization and then I’m planning to go to Canada for free web host final project. That’s why these days I’m too busy with my documents and can not afford to search for these same things. Keep sharingâ€¦