Disclaimer: A mother and a child did not actually push me out of the way; they shanked me over and over again until I finally moved.

I know that Gallery Furniture is not a gallery, but again, it uses the
word in its name, and therefore I am compelled to write about it. 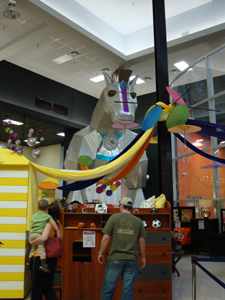 I went to Gallery Furniture for the first time in my life last weekend.
Recently
rebuilt, the new Gallery Furniture was constructed to replace the old
warehouse, which had been nearly burnt to the ground by a disgruntled
employee less than a year ago.

Most people who live in the Houston area have at least a passing
familiarity with Gallery Furniture and its owner Jim McIngvale, an
almost unintelligible, fashion bereft, genuinely sincere, highly
generous man.  Known for favoring shirts stitched from Texan and U.S.
flags, McIngvale a.k.a. Mattress Mack, has touted his wares over the
years through a series of commercials, in which each word pronounced
falls so rapidly and clumsily into the next that you wonder how he has
succeeded at all.

But succeed he does.  I credit this in part to the one McIngvale slogan
that rises with unwonted clarity above the mishmash of other sounds:

It is highly arguable whether or not the store does indeed save you
money, but the slogan, like any other publicly proclaimed phrase, has
become truth with repeated utterance. 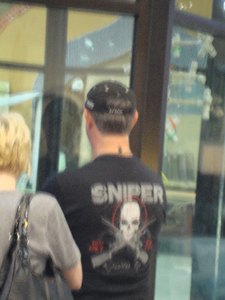 I was apprehensive about visiting Gallery Furniture.  Visiting places
outside of the loop that are filled with large groups of regular
people, frightens me, as I am afraid I will be singled out and killed
by the others in a manner reminiscent of Piggy’s death in Golding’s
“Lord of the Flies”.   (Thank God, Gallery Furniture does not stock
conches.)

On the day I visited, I parked my ratty little Ford Escort between two
towering, pristinely manicured Chevy Silverados at the far end of the
Gallery lot, and then wove my way to the front of the store, through
row after row of Dodge Rams, Chevy Avalanches, Nissan Titans, Toyota
Tundras, and the less formidable sounding Ford F-150’s.  I was kind of
running as I did, and the sound of my feet hitting the loose gravel
startled an older couple, who turned around and glared at me in hateful
fright.  Fortunately their understanding of the world was reestablished
by the song that wafted in the breeze above our heads, its lyrics so
familiar and predictable, that you, or I, or the Head of Sargon with
his ears lobbed off could have guessed what it was from a thousand
miles away:

And I’m proud to be an American where as least I know I’m free.
And I won’t forget the men who died, who gave that right to me.
And I’d gladly stand up next to you and defend her still today.
‘Cause there ain’t no doubt I love this land! God bless the U.S.A. 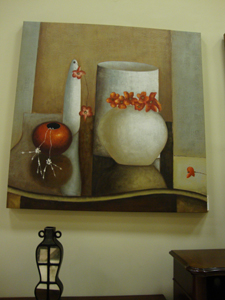 I trailed into the store behind a
convoy of others, including a couple in identical give-me caps, and a
slow walking family, whose five children waddled their behinds like a
badelynge of chubby ducks.  Once inside, the hustle and bustle of the
showroom was overwhelming, like a scene straight out of Franz Kafka’s Amerika, when young, displaced Karl steps into the din of the Hotel
Occidental dining lounge.

Like clockwork every few seconds,
pairs of men with couches on their shoulders ran toward the entrance of
the store shouting “Excuse me! Excuse me!” to anyone unfortunate enough
to get in their way. All over the showroom floor, dozens upon dozens of
red shirted employees competed for customers and sales, and on occasion
you could hear an individual sales pitch rise above the fray, as he or
she expounded upon the virtues of a Tempur-pedic Cloud Supreme or a
SOLID WOOD credenza. I stood in an aisle too long, gaping at the
world’s largest painting of Elvis, when a mother and child pushed me
out of the way, in order that they might stare at a trio of near
petrified toucans who clung in fright to their perches in an narrow,
dimly lit glass cage.  A suspicious manager eyed my camera and asked,
“if I needed help”.  Prepared for such an event, I had made up a story
in the car about wanting to show my husband pictures of the furniture I
intended to buy, but forgot and said some nonsense about writing an
online blog, which featured art from area furniture stores.  This seemed
to satisfy him, and I was on my way.

My immediate guess, based on a superficial glance of its departments, is
that the store’s interior designer is either bipolar with manic
tendencies or is a speed addict cranking to the max.  The place, in
terms of any traditional design sense, is crazy train full on bull
goose loony wackadoodledoo. (Fair warning to schizophrenics, autistic
individuals, epileptics, those with Alzheimer’s or just plain cultured
snobs, — step away from the store.) 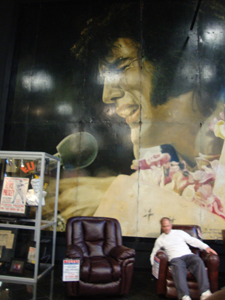 Every available surface is occupied by something, and each and every
“something” — whether it be a display, or a showroom vignette full of
weirdly chopped down tree dividers and gigantic Texas flags and fake
window scenes of Hawaii, or one of the hundreds of badly designed
starving artist paintings that at their very best would receive a D- in one
of my classes, or the little bunny statuette playing the cello, or a
canoe hanging from the ceiling, or a man wearing a sniper shirt, or the
glass display cases full of Disney figurines incongruously placed next
to a door and windows that got more blinding glare and sun than any
other part of the building, or a twenty foot robot Japanesey looking dragon that towers
over one end of the store, or the garish marquee that says “”Change the
Environment, Change the Brain, Change the Behavior”, or the high
definition TV room wall covered in Hummer rims, or any of a hundred other things– is more aesthetically
devoid and jarring, and more delightfully wonderful (in the way that only
really awful things can be) than the next.
I have to say, I will probably never go back to Gallery Furniture again, because it freaked
me out and I felt itchy the entire time I was there, but man o man, am I ever
glad I went.   I love, love, love that place!

Thanks as always Beth for your candid appraisal of the Houston scene.