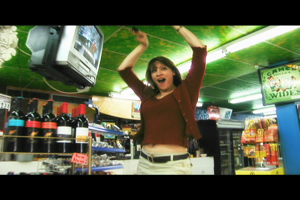 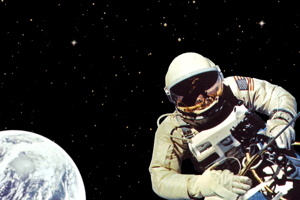 Buffet, Volume 1 features 13 artist-made videos related to Houston and food, plus interstitials (shot at Luby’s, Fiesta, Sengelmann Hall and a private kitchen) made by the creators of the DVD, artists Kelly Pike, Kara Hearn and Sasha Dela (I appear as a grocery shopper at Fiesta, however, the producers did not buy my groceries in exchange for this review). The self-titled “Buffet Chefs” describe Houston as “an endless sterno-warmed parade of variety (food, weather, culture).” It’s the perfect environment to grow cultures. The side of Houston that “Buffet” hopes to capture with this first release is the city where one can establish a career as a respected reporter while dressed as a dandy, build an amusement park in tribute to oranges, or barbeque on your car’s engine without worry. 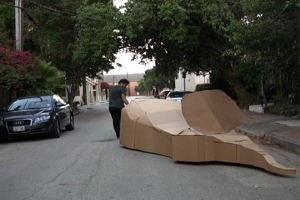 The name “Buffet” plays on the notion of media as consumable and it lends itself descriptions from the culinary lexicon like melting pot, spicy and congealed. The menu on the DVD takes advantage of this scheme, with sections labeled “Breakfast,” “Lunch,” “Dinner” and “Desert.” The assignment of each video to a different meal doesn’t follow any obvious logic, but generates a nice pacing for the viewing process. 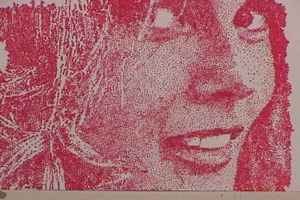 As consumption of media goes, “Buffet” opts for fusion cuisine – combining different genres (verité, observational, animation, performance, and experimental). However, there are a handful of works that defy easy categorization. For example, Susan Chen’s two video contributions, Orange Tree Red Sky (2008, 0:29) and Bubble Hurricane (2009, 1:15) are so brief that they’re over before you can decipher them. Both videos appear to depict beautiful, colored landscapes floating in an aquarium, but the scale and materials are difficult to gauge. I am partial to these sorts of elusive video moments that resist any resemblance to popular media and disappear before you can grasp them – leaving just an afterimage. Along these lines is Laura Lark’s Aura (2004, 2:55); an animation of the artist’s pointillistic marker drawing of 1960s superstar Ann Margaret, with parted lips and hair draped over one eye. The time-lapsed video, set to orchestral jazz of the Sixties, captures the laborious drawing process, ten dots at a time. Galería Perdida’s Tugboat (2008, 6:41) also falls into the uncategorizable, with an artist towing an oversized cardboard sculpture from the back of his bicycle through Houston streets. This bizarre activity appears to warrant no special attention from passersby who are accustomed to art cars and shopping cart hauling. 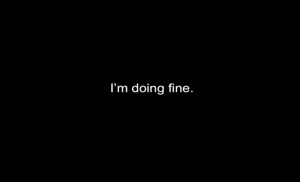 The Exact Chain of Events…John Herschend, 2007

Among the standouts are works by Jonn Herschend and Kelly Sears. Jonn Herschend’s The Exact Chain of Events (2007, 3:48) is a text-only video with a bungled recounting of a “chain of events” that begins, jerks forward, brakes, and then restarts from the beginning like a conversation that cannot find consensus or logic. “1. I called you,” or “1. You called me,” or “2. You called the dog.” The text is inverted throughout, black text on white background, and then white on black, creating an optical effect that underscores the discordant storyline. Kelly Sears’ The Drift (2007, 8:14) is an allegory about American social engineering told through animated still images lifted from the golden era of space travel. At first space missions are used to stir collective patriotism, then looking to the skies is banned to prevent a space-imported disorder known as “the drift,” which reads like the 1960s drug-inspired creativity and nomadism that succeeded 1950s conformity. Sears’ trippy animation technique causes the subjects to appear to be in suspended animation and under a deep trance. 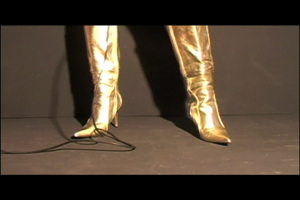 A few contributions don’t quite push the medium to the outer limits. Sharad Kant Patel’s Dance des Fanatiques de Bazarette (2006, 2:55) uses the musical form to present a spontaneous dance routine in a convenience store. While humorous and well-executed, it feels overproduced and predictable in light of the experimental forms represented by other titles. Featuring a stuffed hand puppet named “Brandon,” Cody Ledvina’s Intro to Brandon (2009: 1:40) has the opposite problem. The lackadaisical production and LOL-type humor is better suited for YouTube. And Hilary Wilder’s Everybody’s Got Problems (2000, 7:00), which syncs dialog from The Lost Weekend with the film Rudolph the Rednose Reindeer, appears dated and out of place among the more recent works. 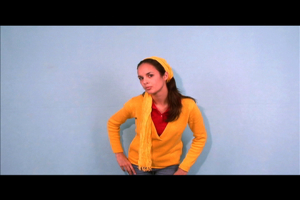 And here I will contradict myself. James Sham’s Close Caption (2008, 4:36) is one video that I could watch again and again, and yet it employs your run-of-the-mill music video format. A young woman signs the lyrics to the 1996 hip hop song Let Me Clear My Throat by DJ Kool. However, it does something unusual, too – it shows the nuances of sign language as sexy, poetic, witty and choreographic.

There will be a “Buffet DVD” release party on Sunday, February 21, 6-8pm at DOMY Books, 1709 Westheimer Road, Houston.

Andrea Grover is
an independent curator, artist and writer. In 1998, she founded Aurora
Picture Show,
a now recognized center for filmic art, that began in Grover’s living
room as “the world’s most public home theater.” She has been a migrant
curator for apexart, Contemporary Arts Museum Houston, Dia Art
Foundation, The Menil Collection, and Parkinggallery, Tehran. She likes to share.