One of the potential hazards of moving to a small town is that you may end up the Mayor. Such is the case with Travis Whitfield, an artist who was so enamored with the rural town of Keachi, Louisiana (pronounced Kee-chi), that he settled there, and inadvertently became the town’s appointed archivist, preservationist, historian and finally, Mayor. In the late 1960s, Keachi caught Travis’s attention during his regular drives between Shreveport and Houston (where he was an art student at U of H). If you recall the episode of The Twilight Zone, “A Stop at Willoughby,” Travis was like the commuter on that train who longed to get off at Willoughby, “a peaceful, restful place, where a man can slow down to a walk and live his life full measure.” Fortunately for Travis, stopping at Keachi was just the beginning of his adventure, unlike the fate of the poor sap on The Twilight Zone. 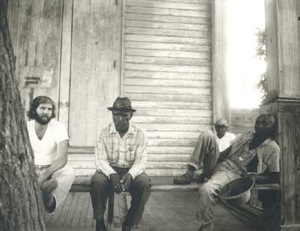 Travis Whitfield with the porch crew, 1973

For over four decades, Travis has documented the population of Keachi in photographs and audiotapes, now on view at Project Row Houses. Long before the “slow movement” had taken root, Travis opted to reconnect with a small civic population that prided itself on self-reliance, farming, and oral tradition. In particular, he was charmed by a group of old African-American men, descendents of slaves, he lovingly termed “the porch crew.” The crew, now all deceased, enjoyed daily musings on subjects ranging from Richard Nixon to the Ford Motor Company to horses— Travis said they talked A LOT about horses. Looking at Travis’s photographs and listening to the voices of these men makes it easy to imagine their lives – extremely poor, but rich with tradition and community. The porch that the crew occupied as a “sitting porch” was that of the former general mercantile store, AW Wyatt Grocer & Cattle, built in 1848. The building remained vacant until Travis rented it for his studio in 1971. Photographs of the Greek Revival storefront are on view in the exhibit, and incidentally, the building is now on the National Register of Historic Places.

When I met with Travis for a tour of his exhibit, I asked what the town people thought of him when he arrived. He said the white folks thought, “I was a hippy– an antagonist bringing the counterculture.” And the black folks? “They didn’t really care.” Which is why Travis gravitated toward the porch crew, an animated group who readily embraced his presence, or at least didn’t take much note of it.

Travis and I talked about how the residents of Keachi were natural recyclers and archivists— a given trait of those who can’t afford disposable conveniences. The exhibition, inside a row house, is appropriately furnished with items from the late Keachi resident, Ward Barnes, who salvaged everything from barrels to church pews and greeting cards. For these folks, slow living was not a movement. It was just a way of being. 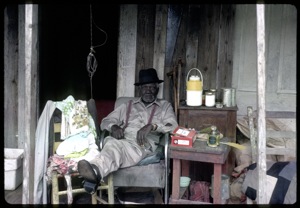 The exhibit is titled “Further on Down the Road” after a song by Taj Mahal. A free screening and discussion with Travis Whitfield and Station Museum curator, James Harithas will take place on Friday, Feburary 19, 7pm at Project Row Houses. The exhibit is on view through February 28.

It’s a great place to sit for a while.