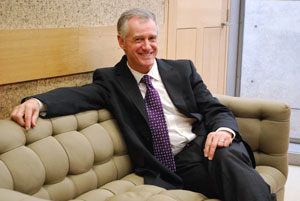 No question about it, Fort Worth’s Kimbell Art Museum is a world-class museum, but it’s never been known for its cutting edge exhibitions. Enter Malcolm Warner, a 56-year-old Brit, and before you know it there’s an out-of-the-box exhibition of imaginative film installations based on five pieces in the Kimbell’s permanent collection. Time Magazine was impressed enough to include the show in its top ten exhibitions of 2009.

Following curatorial stints at the San Diego Museum of Art and the Yale Center for British Art, Warner arrived at the Kimbell in 2002 and quickly went to work initiating and curating an exhibition of George Stubbs, the British animal painter, which featured Stubbs’ iconic tour de force Whistlejacket. As a result of his interest in the enduring nature of portraiture as an art form, Warner collaborated with Madrid’s Museo Thyssen-Bornemisza to produce The Mirror and the Mask, with portraits by Van Gogh all the way up to David Hockney and Lucian Freud.

After serving as the Kimbell’s senior curator for five years, Warner was named the museum’s acting director, a post he held for 18 months. Today, the articulate and affable Warner is the deputy director of the Kimbell and the responsible party for some of the museum’s recent breakthrough exhibitions, notably Philip Haas ‘ poetic films, Butchers, Dragons, Gods & Skeletons, one of which received the Venice Film Festival’s Premio Open award.

The Kimbell’s current exhibition, From the Private Collections of Texas: European Art, Ancient to Modern (up through March 21, 2010) is another Warner brainchild. I spoke with him the day after he returned from a quick trip with Kimbell Director Eric Lee to confer with Renzo Piano on the design of the museum’s upcoming expansion.

Christina Patoski: Where did the idea for the Private Collections of Texas show come from?

Malcolm Warner: It was my idea while I was the acting director of the Kimbell to do the exhibition because it makes such a delightful sequence of stories to look at who the great collectors have been in this state, why they’ve collected and their particular tastes-and to look particularly at the way they’ve made their collections available to the public by donations to museums, or by even the creation of museums as in the case of the Menil in Houston. It was also a very good way of bringing together a lot of very high-quality works of art to make a very varied and colorful, attractive exhibition.

CP: How did you decide who was going to curate it?

MW:The natural choice within the Kimbell was the most recent addition to the curatorial team here, C. D. Dickerson. C. D. is not only a very gifted curator, he happens to be from this area so he had a head start in knowing his way around Texan collectors. He made the perfect combination with his co-curator on the show, who was Rick Brettell, the former director of the Dallas Museum of Art. Although he’s not originally from Texas, Rick has such a history of involvement with Texas collectors that he, too, could bring extraordinary familiarity to the subject even before they began to do their research to find out where all the treasures are buried.

CP: In your opinion, how did the show turn out?

MW: Some things were predictable. For example, at the heart of the show there’s a spectacular group of impressionist and post-impressionist paintings. What surprised me more were the pockets of interest that have arisen in different parts of Texas in less expected areas of the history of art. There are collectors in Dallas whose passion is modern Swiss painting. And who would have thought that in an exhibition about what people have collected in Texas the climactic room at the end of the exhibition would be a roomful of Mondrians, but it is. There’s an extraordinary concentration of works by Piet Mondrian which is in large part due to the interest of Jim Clark in Dallas, one of the great collectors of all time in this part of the world.

CP: What are your interests outside of the museum?

MW: I’m very proud to have started a softball team when I was the acting director of the Kimbell. It wasn’t my choice of name, but somebody came up with the name, The Kahn Artists. It’s a pun in more ways than are worth explaining. The standard of our play was about on the same level as that name.

CP: What position do you play?

MW: I like third base. It’s my way of going native. Coming from Britain, there’s at least one thing that I’ve done that’s purely American.

MW: I played off and on in a very amateurish way without taking lessons for years. Even as a student I learned a few chords, but I’ve only seriously started taking lessons in the last five or six years.

CP: What kind of guitar do you play?

MW: I own two guitars, a Fender Stratocaster and an Archtop Eastman guitar that has somewhat more of a retro flavor. It’s an electrified acoustic guitar with f-holes which I’m very fond of because it looks so beautiful. No guitar sounds good when I play it, but at least they look beautiful. Honestly, the pleasure of it for me is not so much performing because I’m so hopeless. It’s understanding songs that I love, and to be able to figure out how to play a song, even if I can’t actually play it that well. For me it’s a way into getting a better understanding of great music. I don’t aspire to make great music myself. I think everyone should do something that they do very poorly. For a lot of guys it’s golf, for me it’s playing the guitar. It’s humbling. By taking lessons, I just prevent myself from getting worse.

CP: What have you been listening to lately?

MW: I’ve been listening to the great jazz guitarist Charlie Christian. Guitar playing like that is such a virtuoso performance. It’s just unthinkable for someone like me to be able to play like that. I also get a lot of pleasure from listening to much simpler guitar work, like Hubert Sumlin, Howlin’ Wolf‘s guitarist, who is much less of a virtuoso, but a great guitarist. He can come up with very simple things that are wonderful. Even though I can’t play those all that well either, at least it seems a bit more conceivable.

Christina Patoski is a journalist and photographer who lives in Fort Worth.  A former NPR reporter, she has been published in Newsweek Magazine, The New York Times, Life Magazine, and USA Today.  Her photographs have been exhibited in museums and galleries throughout the United States, including the Smithsonian’s Museum of American History.  She received a National Endowment for the Arts fellowship grant for her video and performance art which was shown at the Whitney Museum of American Art, the Walker Art Center and the San Francisco Museum of Modern Art .

Well played Malcolm!
We played in the same football (soccer) team around the time you began studying at the Courtauld.